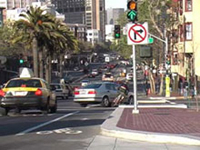 Serious injuries dealt to a young woman cycling to work earlier this week by a truck making an illegal turn onto the freeway ramp at Market and Octavia have galvanized transportation advocates and sparked new interest in the role of freeways in the urban setting. The woman remains in critical condition, and a press conference and rally were held this morning at the site where she was struck.

Groups of neighbors living near freeway ramps, along with the San Francisco Bicycle Coalition, Walk San Francisco, Livable City and other transit activists, have called for a response to the danger this ramp and others present to pedestrians and bicyclists. The City has historically failed to pursue charges against motorists who have struck and injured, or even killed, pedestrians and cyclists. The press — perhaps with an eye to automobile advertising — refers to even incidents of gross negligence as “accidents,” as if turning into a person walking on the green in a crosswalk just couldn’t be helped.

Freeways make themselves felt in the urban fabric even when traffic flows smoothly and no one is hurt. The first thing deceptive about freeways is their name. Nothing is actually free about freeways, but even progressives fail to talk about the costs. The freeway is just there, a fact of life. These strips of roadway affect city life in complex ways, however.

No subject gets the conversational juices flowing in San Francisco like real estate. Yet the presence of a gated community that takes up quite a bit of the city’s 49 square miles goes unnoted. No real gates block the entrance and the excluded can visit for the price of a bus ride, but freeways do function as gated communities.

Freeways exclude pedestrians. They exclude bicyclists. And they sadly under-serve transit users. Freeways cut through communities and wall neighborhoods off from one another. “You can’t get there from here” is no joke for a pedestrian trying to navigate the ramps at Cesar Chavez or Alemany to travel from the Mission to Bayview or go home from the Farmer ’s Market.

Not counting on- or off-ramps, fly-overs, feeder lanes and inter-changes, or odd spurs here and there, off-limits pavement comes to about a square mile of San Francisco real estate — or about the equivalent of Golden Gate Park west from 19th Avenue all the way to the beach.

(I’m no mathematician or statistician, and my calculations are quite rough. I counted the combined length of highways 101 and 280, Doyle Drive, and the Central Freeway as around 20 miles and used an average width of about 150 feet by counting lanes, median, shoulders, and landscaping for one stretch of 101 at hospital curve. Readers may have more precise numbers.)

Would San Franciscans stand for half of Golden Gate Park becoming a gated community?

Most progressives in San Francisco probably understand how extreme wealth creates and feeds off poverty. But they seem rarely to give a thought to how planning for speed and ease for cars creates lack of access for pedestrians, bicyclists, and transit users. Sue Bierman and the freeway revolt gave birth to the movement to save San Francisco from greedy development schemes, but along the way, the freeway aspect has been forgotten. It’s time to tally up the true costs of unfreeways and begin to think of ways to undo their harm.

Fran Taylor is coordinator of C.C. Puede (Cesar Chavez, Yes We Can!), a group of neighbors, merchants, parents, and transportation activists trying to make Cesar Chavez Street more worthy of the man it was named after. She can be reached at ftaylor@cmp.com.