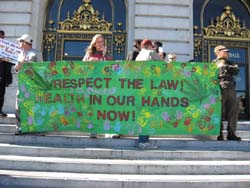 At a Press Conference held on San Francisco City Hall Steps at noon on Monday February 4th, members of the San Francisco Medical Cannabis Community and supporters gathered in solidarity to call for Mayor Gavin Newsom to end his silence about recent D.E.A. scare tactics against medical cannabis facility landlords. These threats are in the form of letters threatening asset forfeiture and imprisonment if they continue to rent to Medical Cannabis dispensaries, even though they are doing so pursuant to City regulations. This tactic has already worked in Southern California.

Rev. Webster operates the San Francisco Patients’ Co-op scheduled to close later this month after the landlord’s receipt of one of these letters. This is a great blow to the Medical Cannabis Community since this particular dispensary is extremely community oriented with many social programs throughout the day, every day. Many patients, some of whom live in federally funded housing where they are unable to medicate without fear of losing their homes, have nowhere else to go during the day and have been a part of this facility for years.

The SF Board of Supervisors is scheduled to hear a resolution on February 12 at 2 PM at SF City Hall in their chambers on the second floor to ask their support for the Chairman of the Judiciary Committee of Congress, John Conyers Jr., who called for hearings to investigate the DEA attempt to undermine California state laws. This resolution is similar to the one overwhelmingly passed by the Democratic County Central Committee on January 23. Hopefully this will pass on first reading. Please attend and give public comment in support of this resolution if you are able.