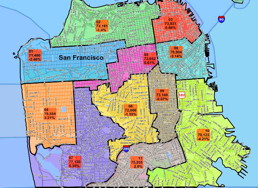 The Redistricting Task Force, who must redraw the lines of San Francisco’s eleven Supervisor districts, released its first draft proposal January 4th – and there is no shortage of criticism and commentary in the media. The Task Force is holding hearings throughout the City, with the next one focusing on District 6 is 10:00 a.m. on Saturday, January 21st at Bayanihan Center (1010 Mission Street.) But relax, folks. Instead of just complaining about the new map – which is only a first draft, by the way – anyone can take a stab at drawing lines themselves at ReDraw SF, and submit your proposal to the Task Force. I have started looking at the draft proposal – and have some initial feedback spelled out in this article. In the northern half of the City (Districts 1, 2, 3, 5 and 6), the proposal wisely sets boundaries along major corridors – and I only have a few quibbles. The bigger problems are in the southern half of the City – in Districts 7, 8, 9, and 11 – where the Task Force proposal would radically reshape those districts, beyond any objective U.S. Census requirement.

Every ten years, the Redistricting Task Force – a body of nine commissioners, who are appointed by the Mayor, Board of Supervisors and Elections Commission – must re-draw the City’s 11 Districts to adjust for population changes. And with mass real estate development in SOMA in the past decade, it is no surprise District 6 must lose over 20,000 residents – with Districts 10 & 11 also over-populated (albeit to a lesser degree.) All other districts are under-populated and will have to collectively “grow.”

For full disclosure, I initially applied to be on the Task Force – because as someone who lives and works in District 6, I knew we would be most affected by the change. At this point, I am a member of the public – and have my feedback on the Proposal.

For years, District 6 elected and re-elected Chris Daly – because, despite losing in the SOMA condos, progressive voters in the Tenderloin and North Mission put him over the top. But in 2010, Jane Kim re-shaped the map by proving a progressive can also win the votes in moderate parts of the District. The Task Force proposal would take the entire North Mission out of District 6, by pushing its southern boundary with District 9 from 18th and 20th Streets – all the way up to the Central Freeway.

On a certain level, that was inevitable. District 6 has to lose over 20,000 people, and District 9 has faced the largest population loss. And while I don’t like splitting SRO tenants in the Tenderloin from those in the North Mission, I’m resigned to that fact.

But the Draft Proposal goes further by giving District 9 a small triangle north of the Central Freeway, which would take Jane Kim out of her own district. A City Attorney memo told the Task Force they may take an incumbent Supervisor’s residence into account, so it makes sense to put the triangle back in District 6 – which would make the Central Freeway a consistent boundary. To partially compensate for that, give District 9 four blocks northeast of 16th and Potrero – currently slated for District 6.

While the Draft Proposal did not take all communities of interest into account, it’s clear the Task Force was pushing for consistent boundaries along major streets to avoid any suspicious gerrymandering. Nowhere is that more obvious than using Geary and Van Ness as consistent boundaries that transcend Districts 2, 3, 5 and 6.

At earlier Task Force Hearings, I testified that while District 6 must lose population it is crucial to keep the Uptown Tenderloin as a whole within its boundaries – as the low-income population does not vote in high numbers, and needs a collective voice to have an impact. The Draft Proposal shifts District 6’s northern boundary from Post down to Geary – and its western boundary from Gough & Laguna to Van Ness.

I applaud this part of the Draft Proposal. Geary would serve as a boundary between Districts 2 and 3 west of Van Ness, and Districts 5 and 6 east of Van Ness – with Van Ness as an “east-west” boundary for all four districts.

Geary & Van Ness is also the site of the future CPMC Hospital – a big development project with citywide impacts. While it is usually a bad idea to split a population among four districts, in this case it makes perfect sense to have the CPMC project at such a crossroads – as Supervisors Farrell, Olague, Chiu and Kim will all fight to make sure it benefits their constituents.

One of the worst ideas in the Draft Proposal is to split off part of Bernal Heights, and put it into District 8. Bernal Heights is a well-recognized (and politically active) San Francisco neighborhood long associated with District 9. In fact, both Supervisors Tom Ammiano and David Campos have lived there.

The Draft Proposal moves the current D8/D9 boundary at San Jose Avenue all the way to Holly Park. I would put all of Bernal Heights back into District 9 – with a possible “compromise” boundary at Mission Street, because District 8 does also need to expand its population.

Moreover, the Draft Proposal would take the entire Guerrero-Valencia corridor out of District 8 and into District 9 – shifting the boundary west to Dolores Street. For the sake of consistent boundaries and to compensate for putting all of Bernal back into District 9, I propose making traffic-heavy Guerrero Street as a straight D8/D9 boundary all the way from Market Street down to its terminus past Cesar Chavez.

And to partially compensate for District 9’s need to expand, I would push its eastern boundary with District 10 from Potrero Avenue to US-101 (James Lick Freeway) – giving it San Francisco General Hospital, and helping District 10’s need to shrink.

As it becomes apparent to anyone looking at the Draft Proposal, the oddest changes would come in District 8 – which would stand to gain entirely new neighborhoods west of Twin Peaks, and past Glen Park over by City College. Part of this is because District 8 is under-populated and has to expand – so some change is inevitable.

But if that’s the stated reason for such a radical shift, there is no excuse to move District 8’s northern and eastern boundaries south – taking away heavily LGBT blocks out of Scott Wiener’s district. As some have observed, the Draft Proposal even takes the LGBT Center out of District 8. While scaling back on much of its western expansion, we need to keep District 8’s northern and eastern boundaries closer to its current form – in order to preserve an LGBT community of interest.

The Draft Proposal would shift District 8’s current western boundary with District 7 from Twin Peaks Boulevard all the way to Woodside, Laguna Honda and even 7th Avenue. This would throw in huge swaths of wealthy neighborhoods like Forest Knolls & Clarendon Heights that have long been part of District 7, and would very dramatically alter the demographics of District 8 – diluting the Castro’s influence.

I spent some time on ReDraw SF trying to see how we could scale back much of that change – which was not always easy. Tentatively, my proposal would give the area by Laguna Honda Hospital back to District 7 – while placing the neighborhood directly south of UCSF Medical Center into District 5. Christina Olague already has to represent issues with UCSF that her Parnassus Heights constituents have, so let’s give her UCSF’s neighbors to the south.

But District 8 would still expand westward to Clarendon Avenue, bringing together neighbors who live both directly east and west of Twin Peaks. As for the southwest expansion into Sunnyside (which is currently in District 7), that is less problematic – because District 8 already includes Glen Park, whose constituents share some of the same issues. Moreover, it would be harder to undo because D11 is over population.

Bottom-line – District 8 must expand, and it’s likely some more homeowner-heavy neighborhoods will be added. But not nearly to the extent that the Draft Proposal contemplates. The Redistricting Task Force must have a more balanced solution.

District 11 Loses All of Oceanview & Ingleside

But as a result, Oceanview – a historically African-American, working-class area that borders I-280 and has more in common politically with the Excelsior than West Portal – would now be in District 7. Oceanview is too small to elect a Supervisor alone, so it should be placed in a District with other like-minded constituencies so that coalitions can be made and collectively that community would have a voice.

I spent some time on ReDraw SF trying to see how much we could put Oceanview back into District 11 – while shedding some of D11’s size elsewhere, so that District 11’s population doesn’t get too big again.

One possible solution would be to scale back D11’s expansion into the Portola neighborhood. The Draft Proposal gives District 11 all of Portola – half of which is currently in District 10, and the other half is currently placed (oddly) in District 9. D11 should definitely still absorb the D9 half of Portola, as it is a natural eastern extension of the Excelsior. But keeping out at least part of the D10 section of Portola would allow District 11 to retain the Oceanview neighborhood on its western flank.

My feedback here is not meant to be comprehensive, as scores of San Franciscans will no doubt attend the Task Force Hearings to speak out against other parts of the Draft Proposal I left unmentioned. For example, some advocates in Rincon Hill are displeased that parts of their neighborhood would be placed into District 3 – a point where I can see arguments made on both sides. Nor did I offer detailed, block-by-block recommendations – as I am still working to finalize my maps at ReDrawSF.

But while change is inevitable, and the lines must be drawn to reflect U.S. Census numbers and equalize population, the Draft Proposal makes too many drastic changes to the current map – more than what is really required. It will be up to the Task Force to draw a reasonable compromise that incorporates all of our concerns.

In the meantime, I urge members of the general public to get involved – by attending Task Force meetings (which are listed here), and speak out for your constituency. And to all my fellow political nerds, I urge you to go to ReDraw SF, set up an account and start having fun proposing ways to re-draw the district boundaries.