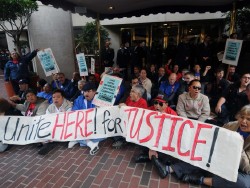 Ed. Note: After 92.3% of Local 2’s “Class A” members voted last week to authorize a strike, UNITE-HERE is planning an all-day siege of the Intercontinental Hotel today at 5th & Howard.

The Law of Momentum, one of the most powerful postulates of physics, describes a collision “where the momentum gained by one object is equal to the momentum lost by the other object.” Physics is of course one of the “hard” sciences, but the same formula can perhaps be aptly applied to the “softer” social sciences as well, where opposing economic forces collide and jockey for position. We are seeing such a clash in San Francisco …

Contract negotiations for 9000 hotel workers have not yet reached the three-month mark. Yet, there have already been over 100 arrests, several downtown protests of over 1000, a planned extended hotel “SIEGE” that “drives the cheap bosses nuts” and now an overwhelmingly conclusive strike vote.

It seems clear that another major street fight is shaping up between the powerful Local 2, UNITE-HERE, AFL-CIO, hotel workers union and two dozen of the city’s largest and most prominent hotels. Big names like Starwood, Hilton, Hyatt, Fairmont and InterContinental are all locked in a battle with the union over shifting more healthcare costs to employees and on increasing workloads.

There are another 30 smaller union hotels with expired Local 2 contracts that are also affected by negotiations with the larger chains.

At least one major hotel owned by the Blackstone Group, the Hilton, has proposed cutting starting wages for new hires by 25%. According to Local 2 figures, the CEO and part owner of Blackstone was paid $1,385,391,042 in 2008. This is not a typo though it may seem like one. The average Local 2 member earns $30,000 annually.

On the one hand, employers are stalling negotiations seeking to ride out the approaching holiday season to keep profit levels up without any disruptions. On the other hand, hoping to swing things their way, several thousand hotel workers descended a few days ago on the cavernous, huge Civic Auditorium and voted by 92% to authorize a citywide strike.

Since we are not negotiating with a multi-employer group, we intend to negotiate a ‘pattern’ agreement with one or a couple of companies … That deal will become the new Union Standard …”

But the large hotel chains are not about to cave in even though they are estimated by the San Francisco Examiner to have lost between $50 million and $100 million in the 2004-2006 battle. Though suffering these embarrassing losses, local hotels retain a bloated war chest riding high on the enormous tsunami wave of profits that produced nationally over $200 billion in the past decade. [Smith Travel Research, Price Waterhouse Coopers]

In addition, since the $5.3 billion tourist industry is the largest economic sector, they have other cards to play in exerting their own pressure on city politics. For example, a 14% municipal tax on each room generated $528 million to depleted city coffers in 2008 alone.

But Local 2 is also holding a few aces in their hands. In addition to uniting its own membership behind the strategy of “One Union, One Contract,” the union has also reached out to hotel workers in other cities. An important element of Local 2’s strategy in 2006 and again in 2009, is to gain more bargaining leverage by lining up common expiration dates with UNITE-HERE units in other cities.

As a result, Local 2 is bargaining today along with 14,000 other union hotel workers in Chicago and Los Angeles. If the bosses delay negotiations longer, other local contracts will expire and hotel workers in other major cities will also work together to establish common expiration dates and common bargaining objectives.

Obviously, this national approach puts maximum pressure on the large chains and can potentially shift the balance towards employees.

“Hotel workers in Chicago and throughout North America are experiencing the same thing as we are here in San Francisco,” Casey told me. “Everywhere they can, this industry is trying to take advantage of the economy to roll back the clock on working people, even while the companies make millions. That’s why we’re fighting side by side with hotel workers in Chicago, Los Angeles, Boston, and elsewhere.”

It’s a strategy that can work. A mass action approach of mobilizing the membership locally to directly confront employers combined with a national approach that unites hotel workers across the country behind common goals and objectives.

It may not be as profound as the Law of Momentum, but it just might be good enough to win.

Carl Finamore attended the October 22, 2009, strike vote meeting in San Francisco. He is a delegate to the San Francisco Labor Council and former President (ret), Air Transport Employees, Local Lodge 1781, IAMAW. He can be reached at local1781@yahoo.com