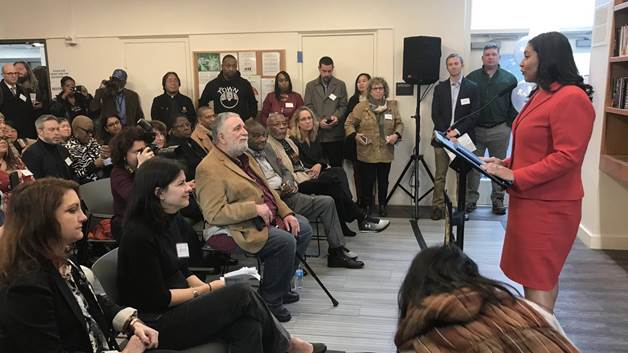 A Year of Transition and Change

San Francisco begins a new political year with three new supervisors, a contested Board presidency, and an immediate squabble over allocating $181 million gained from a one time funding windfall from the state. Aaron Peskin’s  proposal to require a conditional use application for minor home expansions is expected to soon get people down to City Hall in droves. The political year ends with a November mayor’s race and the intensifying of the 2020 Democratic presidential race.

Along the way is the Skinner-Wiener state legislative battle over SB 50. The bill would legalize apartments in most of the city, and would be the most far-reaching land use reform in San Francisco history.  With pro-housing Gavin Newsom as California Governor, SB 50’s chances look good.

Here’s my take on what all this means.

Matt Haney, Gordon Mar and Shamman Walton are all seasoned political professionals. While Mar has not previously held elected office, he has been involved in enough City Hall legislative campaigns to know the landscape and his brother spent two terms as a supervisor).

That all three won in November reflects voters’ recognition that they understood issues and would ably represent the district. It also showed voters willingness to replace three women incumbents with men. Some believe Mar is too “progressive” for D4 but that term has less and less meaning in San Francisco politics. Eric Mar was said to be “too progressive” for District One—before he easily won re-election.

I do not see the three newcomers changing the city’s political landscape. Mar is a far stronger ally of  labor and tenants than Katy Tang but those hoping he works against his district’s interests will be disappointed.

(UPDATE: Yee was selected by a 7-4 vote. And after Mar asked that the vote be redone to elect Yee by affirmation, Ronen alone voted No.) It’s either going to be Hillary Ronen, Norman Yee, or Rafael Mandelman. I’ve been through enough Board Presidency battles to offer this piece of wisdom: supervisors end up voting based on their personal feelings toward candidates, not on issues or ideologies. Lobbying supervisors is usually a waste of time.

Due to an unforeseen one-time state windfall, San Francisco has $181 million in unrestricted funds for politicians to decide how best to spend (the city received a total of $415 million but the balance is governed by voter-approved set asides for schools ($35 million), MTA, children services and the like).

I attended a December 20 event with Mayor Breed when she laid out her spending plan in front of a who’s who of nonprofit housing and homeless groups. It included $20 million for the city’s Small Sites Program, $42 million for a building to house formerly homeless people, $11 million to expand existing Navigation Centers, and millions of dollars to expand the city’s shelter system and recovery beds.

As I listened to the mayor and other speakers I thought back to the decades upon decades when housing and homeless advocates wished that San Francisco would spend more taxpayer dollars on these vital needs. San Francisco historically limited its affordable housing spending to its allocation of federal CDBG and local Redevelopment Agency funds; general fund spending on housing programs was off-limits.

But now we had a Mayor promoting the use of unrestricted taxpayer dollars for affordable housing. And following the legal delays with implementing Prop C, which roughly doubled the city’s homeless spending, the Mayor was essentially allocating much what the city would be spending had Prop C passed.

So progressives are dancing in the streets over Breed’s spending priorities, right? Well, not exactly.

The school district faces a legal challenge to the new parcel tax used to pay for 7% raises for teachers.  So it wants $50 million from the windfall on top of the $35 million it is already getting automatically. Haney and Walton were on the School Board when it approved that funding strategy and Yee and Fewer are former School Board members.

That bodes well for the District’s funding request. But there is a larger issue here.

The School District always knew a lawsuit against the parcel tax was a possibility. The Board approved the raises anyway.  Is the District and Board now saying it lacked a backup plan to ensure the 7% raises in the event of a lawsuit? That strikes me as irresponsible.

Schools could get the money for teacher raises as a loan pending the lawsuit resolution. But since this is onetime money,  the loan should be conditioned on the district adopting an ongoing funding strategy for the raises in the unlikely event the lawsuit succeeds.

It has been reported that some supervisors want to spend some of the money on “energy independence and child care.” This sounds like progressives simply messing with Mayor Breed. The historic progressive priority of funding housing and homelessness doesn’t disappear because your mayoral candidate did not win.

2019’s first major piece of San Francisco legislation to arouse controversy is Supervisor Peskin’s measure to require a conditional use application for home expansions exceeding 10%. That effectively covers the vast majority of home remodeling projects in which at least one room is added.

The bill target historic homes that have been demolished without permits, such as 950 Lombard. Purchased by a developer for $4.5 million,  it’s exterior walls and windows were removed in violation of the permit before it was resold for $45 million

Since this speculator violated existing city law, it’s not clear how Peskin’s measure would also not be violated by wrongdoers. Peskin claims  that the legislation is “aimed at preserving the most affordable housing that San Francisco has,” but the $4.5 million home used in his example hardly qualifies as “affordable.” This seems to be a measure designed to give homeowners even more power over what their neighbors do with their homes; many  believe that the city’s homeowners already have too much power over development.

I’ve read a lot on social media about so-called “working-class” homes needing the protection of Peskin’s legislation. Such houses are a mirage in San Francisco. Progressives in particular need to stop making believe that the city’s unsubsidized single family home market is open to new buyers among the non-affluent.

I foresee Peskin’s measure being amended so that it only impacts larger home renovations. But a vocal public hearing awaits.

SB 50 will be a major talking point in San Francisco politics 2019. That’s because it effectively rezones much of the city. Those like myself urging San Francisco to legalize apartments in all neighborhoods could see this occur by the fall of 2019.

Is a local November ballot measure necessary so that apartments are legalized even if SB 50 does not happen?  I understand that argument but the optics are not good. It creates appearance that even strong backers of SB 50 lack confidence in its passage. The best approach may be for local activists to see the response to the April hearings on SB 50 and then assessing whether moving forward on a local measure is necessary.

The elephant in the room for 2019 is the November mayoral election.

Will Mayor Breed face a serious opponent in November? We really will not know until the week before the June 11, 2019 filing deadline. At this point the only issue that could doom Breed’s re-election is if homelessness sharply worsened,  which I see as unlikely.

The two San Francisco’s two mayors who lost after one term—Agnos and Jordan—both suffered from defections from their original election base. I have not seen such defections from Breed.

Nor are there issue areas where her base is shaky. To shore up her support on the critical issue of housing, the Mayor announced on January 7 that she is moving toward placing a $300 million affordable housing bond on either the November 2019 or March 2020 ballot.  That should prove a popular move.

Overall, Breed lacks constituency defections, has no major vulnerabilities on key issues and there is no obviously strong challenger preparing to run. This puts Mayor London Breed in a strong position for November.

Randy Shaw’s new book is Generation Priced Out: Who Gets to Live in the New Urban America.