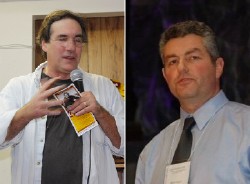 While progressives battle tea baggers, the insurance industry and the traditional media over universal health care, San Francisco is gripped by fierce union vs. union battles. In one corner we have SEIU, which has reportedly brought 600 staff to the city to defend its representation of health care workers against decertification efforts by NUHW. SEIU’s San Francisco campaign is also targeting UNITE HERE Local 2 and its President, Mike Casey, for supporting NUHW’s campaign. Seeking to isolate Casey, Andy Stern and Bruce Raynor sent an August 10 letter to International Union Presidents stating that they were “disturbed by a recent BeyondChron piece that details San Francisco Labor Council head and HERE Local 2 president Mike Casey’s material and public support for a rogue and corrupt organization (NUHW).” This was followed up last Saturday by UHW Trustee Dave Regan telling Casey that SEIU was withdrawing its financial support for the Labor Council in retaliation for Local 2’s backing NUHW. So while progressives push on health care, and unions have an historic opportunity to pass the Employee Free Choice Act and comprehensive immigration reform, SEIU battles Local 2 and NUHW in San Francisco, far from the arenas where the nation’s future is being decided.

The Battle in San Francisco

SEIU has already reportedly brought 600 staff to San Francisco, which exceeds the 400 they have organizing nationally for health care reform. SEIU’s contingent does not match the estimated 900 they brought to Fresno in June, but it still represents a major financial and staff (I asked UHW Trustee Dave Regan about the 600 figure, but he refused to confirm or deny).

SEIU is fighting a three-prong war in the city.

First, it is trying to prevent 33% of San Francisco’s 17,000 home health care workers from signing decertification petitions by the end of September that would lead to a fall election between SEIU and NUHW.

Second, SEIU is seeking to boost its support in hospitals where NUHW has already filed decertification petitions but where elections have been delayed due to SEIU filing challenges with the NLRB. It is rumored that the NLRB will soon allow these elections to proceed, which SEIU’s increased presence in hospitals appears to confirm.

Third, SEIU is mounting an unprecedented campaign against Local 2 President Mike Casey in response to his union’s joining NUHW’s decertification effort. SEIU is accusing Casey of hurting his members by diverting resources from the hotel contract campaign to NUHW’s home health care fight, and by rejecting Regan’s offer to have UHW help Local 2 battle the hotels.

When I told Regan that it was SEIU that brought Casey into the home health care decertification campaign by handing out a flyer calling him a liar, the trustee replied “he is a liar.” Regan went on to call Casey “lying, conniving, and despicable,” and said that his support for NUHW is “beyond contempt.”

SEIU is also targeting Casey’s role as President of the San Francisco Labor Council, of which SEIU-UHW is an affiliate. Regan told me that Casey’s efforts to decertify an affiliate violated his oath of office, though Casey later read me the president’s oath and it says nothing about this.

Regan told Casey last Saturday that that SEIU Locals 1021, 1000 and UHW were going to discontinue paying per capita to the San Francisco Labor Council. He stated this despite Local 1021’s Executive Board not having approved such an action, which could weaken a body that has fought hard to protect its members.

According to Regan, “Mike Casey wants to yell and scream about how he’s fighting these hotels, but he doesn’t want help from SEIU.” Regan would not tell Casey about SEIU’s specific plans to attack Local 2, but one possibility is for SEIU to send letters to Local 2 members accusing Casey of acting against his members’ interests, a tactic SEIU used months ago to little effect.

Regan repeatedly emphasized that he could not understand why progressives would support Local 2’s decision to help decertify another union. He refused to accept that Local 2 was responding to SEIU raids against UNITE HERE bargaining units in Puerto Rico, San Antonio and elsewhere, saying that this had nothing to do with the SEIU-NUHW fight.

In fact, Regan argued to Casey last Saturday that it was it was “flat out wrong” for Local 2 to support the organizing of a competing union (NUHW) in the homecare industry. But when challenged that SEIU was doing precisely that against UNITE HERE – organizing a competing union in the gaming, hotel and food service industry – he said that should be resolved at the International Union level.

Regan expressed anger to me over how San Francisco’s progressive community is backing Casey in this fight. He clearly does not understand Local 2’s historic role in local struggles, or realize that Local 2 is not a top-down union, that Casey does not act alone, and that the rank and file strongly supports NUHW’s campaign.

While NUHW is barred until 2010 from seeking decertification of SEIU’s 50,000 Kaiser Hospital members, both sides are trying to maintain worker loyalty. Last week, 1800 SEIU workers received notices from Kaiser regarding their job status, and while media accounts said there were no union layoffs, NUHW claims otherwise.

Here’s what Kaiser distributed to these workers:

Like all health care organizations, Kaiser Permanente has been affected by the difficult and uncertain business and economic climate. Unfortunately, it has become clear that we must make some workforce adjustments. As a result, we need to notify some employees that their positions are being eliminated.
Therefore, we find it necessary to provide you with a sixty (60) day notice that your position is being eliminated.

If we are unable to locate a job opportunity for you by October 19, 2009, you will have a choice between a voluntary severance package including wages and benefits or remaining in a redeployment and transition status. You will be provided with more detailed information on these options during the week of October 19, 2009.

Regan insists that “nobody will be laid off at Kaiser,” and that “every SEIU member who wants to keep working there will be able to do so.” He credits SEIU for negotiating a severance package “above and beyond the union contract” that guarantees members “one year minimum pay and health benefits.” Regan says his members’ response to Kaiser’s action has been “overwhelmingly positive.”

Ralph Cornejo, an NUHW volunteer who was formerly the Director of the Kaiser division of SEIU-UHW, disagrees with Regan. He asks “why SEIU is holding informational pickets against layoffs at Kaiser hospitals if there have been no layoffs.” He also wonders why, if there’s not layoffs planned, Kaiser management is holding informational meetings with SEIU members to discuss job eliminations.

Cornejo claims Kaiser workers are “extremely unhappy” with the situation, and cites the case of a former SEIU firebrand who showed up at the recent picket wearing the all red colors of NUHW.

When SEIU decided to fight UNITE HERE, Andy Stern insisted that it would not impact his union’s priorities. But SEIU’s national agenda is not being realized, with the union devoting massive amounts of money and staff into a battle with UNITE HERE that has now spilled over into its San Francisco struggle with NUHW.

Speaker Nancy Pelosi’s district is about to see some of the most vicious, nasty, and bitter inter-union fighting in decades. The current situation leaves Stern’s mid-July insistence that “we are close to putting the dispute with UNITE HERE behind us.” even less credible.

Randy Shaw discusses many of the figures in the SEIU-UNITE HERE struggle in Beyond the Fields: Cesar Chavez, the UFW and the Struggle for Justice in the 21st Century