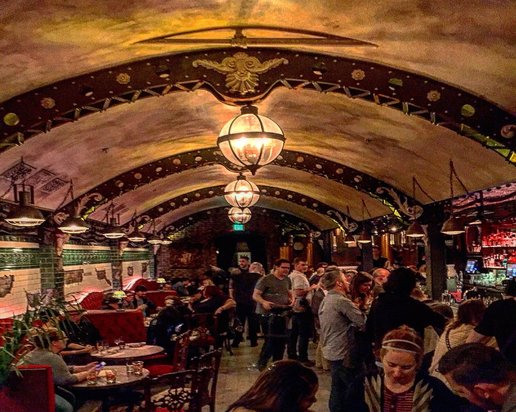 The spectacular new Whitechapel bar at Turk and Polk

On November 19, San Francisco’s Lower Polk Business Collaborative holds a public meeting to discuss whether a 2013 moratorium on Polk Street liquor licenses should be renewed for six more years or allowed to expire.

It may sound surprising that a city known for its drinking and bars enacted such a neo-Prohibitionist measure, but nearby residents were tired of having their sleep disturbed by noisy bar patrons. They  got then Supervisor David Chiu to pass the moratorium.

I can’t speak to the specific impacts of bars on Polk Street, but overall San Francisco needs more restaurants and bars that sell liquor, not barriers to their opening.

San Francisco’s most successful nighttime neighborhoods have a strong supply of bars or restaurants with liquor licenses. And the converse is also true: areas like the Tenderloin’s Little Saigon on Larkin that do a great lunch business find nighttime foot traffic wanting because the area lacks bars. Emperor Norton’s Boozeland is a great bar a block before Little Saigon and the popular Gangway is a block above but their main business is later in the evening. The restaurants that draw lunchtime business lack adjacent bars (the Gangway is the only Tenderloin bar to find its way into J.K. Dineen’s new book, High Spirits: The Legacy Bars of San Francisco).

The contrast between Little Saigon and the Valencia Street/16th Street restaurant scene is striking. The latter has packed bars whose patrons go to nearby restaurants after having a few drinks; the former does not get any spillover from nearby bar patronage so its restaurants get much less business (and some of the best Little Saigon restaurants, like Turtle Tower, close at night due to a lack of patronage).

Geary Street in the Tenderloin gets far and away the neighborhood’s most evening foot traffic because of its many bars. The opening by the FutureBars group of Bourbon & Branch and Tradition at O’Farrell and Jones has dramatically increased nearby evening restaurant business.

In my book, The Tenderloin: Sex, Crime and Resistance in the Heart of San Francisco, I describe how from 1907 to the 1960’s nearly every retail space in the Tenderloin was a bar or restaurant with a liquor license. This was particularly true along Turk and Eddy Streets.

Those were great times in the Tenderloin. Bars and restaurants boosted the Tenderloin’s economy, keeping it afloat even during slowdowns. And starting in WW II and through the 1950’s and early 1960’s the Tenderloin’s gay bar scene helped launched the city’s GLBT movement.

The Tenderloin’s economic problems were caused by a decline in its bars and restaurants. This sharply reduced evening foot traffic, increased public safety concerns and left the neighborhood’s economy reeling.

I’ve often joked that I should support extending the Polk liquor license for six years because those seeking to open such businesses in that area might instead consider the Tenderloin. But there’s no reason for any new liquor license bans in San Francisco.

Liquor licenses are targeted because nearby residents are tired of having their sleep disturbed by drunk and disorderly patrons. They see banning liquor consumption is one way to reduce this problem.

But such bans should target specific establishments who are failing to control their customers instead of imposing restrictions based on geography. The Tenderloin Housing Clinic, which I head, did precisely this in a high-profile battle with an entertainment venue on Sixth Street in 2007. Neither THC nor the complaining SRO tenants sought to ban liquor licenses or nighttime entertainment at Club Six; the goal was simply to get the club to comply with the city’s noise ordinance. When it consistently failed to do so, its license was suspended.

As Paul Hogarth wrote at the time, “We don’t want the Club to be thrown out of business, but we want it to respect the laws and the residential neighborhood. What that means is keeping the noise down so tenants can sleep at night, and truly listening to valid concerns.”

San Francisco should be prosecuting offending businesses, not banning liquor licenses from streets that have long had such uses. Late-night bars, restaurants and night entertainment venues distinguish San Francisco from the suburbs.

If you think people walking the streets of San Francisco late at night is a problem, you do not understand the city’s history.

What Kind of Economic Development?

We are in a time when some criticize San Francisco’s remarkably low 3.2% unemployment rate for creating the “wrong” type of jobs. But don’t bars and restaurants with liquor licenses create jobs that these critics support?

I find few critics of bars and restaurants as jobs generators. The combination of the city’s local minimum wage and the ability of restaurants with liquor licenses to generate greater revenue does a lot to ensure that the industry’s workers are decently paid.

Bans on new liquor licenses contribute to the escalating costs of procuring one. San Francisco already has an artificial limit on liquor licenses, and neighborhood bans make the problem worse.

And if you are looking at San Francisco history, when Prohibition was put before statewide voters in 1916 the two neighborhoods in San Francisco that voted most strongly against it were North Beach and the Tenderloin. Liquor licenses are part of the DNA of both communities.

The November 19 Lower Polk Business Collaborative meeting is at 1098 Sutter and starts at 6:30 pm.