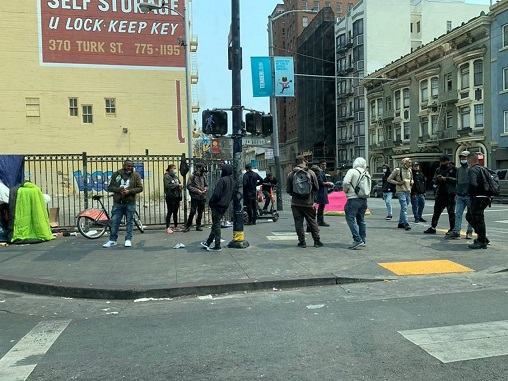 My recent story on the Tenderloin’s recovery led many to ask why the city allows an out of control drug market surrounding the Local 87-owned parking lot at Turk and Hyde. Hyde Street is the main car route and a heavily traveled pedestrian path through the Tenderloin; the scene at Turk and Hyde hurts public perceptions of the entire neighborhood.

Tom Wolf (@twolfrecovery), a true champion trying to stop open drug sales, tweeted a photo of the Turk/Hyde drug scene last week. He said “I count 12 drug dealers in this pic. How many are repeat offenders? Why do we allow this? Every one of these dealers is selling illicit Fentanyl.”

Wolf’s core question—why San Francisco allows the illegal open sales of a product that is killing people—is one the entire city should be asking. Turk and Hyde is even worse than Wolf relays—adding the dealers halfway down the 200 block of Hyde and 300 block of Turk there are usually at least fifty, and they work long hours. Shootings have increased in the area. There are reports that some of the tents bordering the parking lot house weapons.

Wolf’s tweet got a huge response. Many highlighted the city’s tolerance for activities in the Tenderloin it would never accept for an hour in more affluent neighborhoods.

Many responses blamed the drug scene on D6 Supervisor Matt Haney and DA Chesa Boudin. But Haney has been far more outspoken against Tenderloin drug dealing than any prior D6 Supervisor. He backed the Hastings lawsuit to stop tents from blocking sidewalks, helped increase funding for the mayor’s “Mid-Market Vibrancy and Safety Plan,” and  has done as much as he can to impact a SFPD over which he has no legal authority. Haney has tried his best to combat Tenderloin drug dealing.

My June 2020 verdict on DA Chesa Boudin—that he is “failing the Tenderloin”—-has not changed. Boudin’s failure to publicly speak out about the scene at Turk and Hyde and other high drug dealer areas is inexcusable. He has utterly failed to show the Tenderloin’s working families that he cares about their kids or is on their side.

Unlike Matt Haney, Chief Scott can solve the problem. When I met with the Chief soon after he was appointed in 2017 I told him how Mayor Lee closed down the open drug supermarket on the unit block of Turk. Lee forced Chief Suhr to have two officers on the block 24/7, overcoming Suhr’s insistence that this was not a good use of personnel.

Thanks to Lee’s strategy the open drug scene on Turk was soon gone. And it never returned.

Yet this success has not led the SFPD to apply a similar strategy—- known as “hot spot” policing— in other parts of the Tenderloin. Hot-spot policing has a track record of reducing crime without displacing it to other areas.

Chief Scott told me that SFPD lacks the resources to implement hot spot policing in the Tenderloin. A wealthy city with a police department whose command staff (described in a 2017 article as “top heavy and expensive”) includes multiple positions earning well over $200,000 a year “lacks the resources” to protect Tenderloin residents, workers and businesses.

This well-financed command staff cannot end massive open drug dealing on a single corner of the Tenderloin. Maybe if these commanders went out to the corners and directly helped stop drug sales from killing people at Turk and Hyde these “resources” would be more effectively applied.

I’ve worked in the Tenderloin since 1980. Drug dealing is nothing new. But the situation at Turk and Hyde is far worse than ever before.

I describe in my book, The Tenderloin: Sex, Crime and Resistance in the Heart of San Francisco, how starting in the 1960’s City Hall converted a long great neighborhood into a drug dealer containment zone. Illegal activities were allowed in the Tenderloin to keep them from spreading to more affluent neighborhoods.

Mayor Lee vowed to change this. Mayor Breed says the same. But it’s still the case that if the dealers at Turk and Hyde were transported to Noe Valley, Union Street, or to the Upper Fillmore,  the SFPD’s alleged lack of resources would not be an excuse for not removing them.

And let’s be clear here: the dealers are not Tenderloin residents. Nearly all come from the East Bay. The U.S. attorney has conclusively established this. So this is not a case where illegal and dangerous activities are occurring in a neighborhood because local residents are the cause.

Mayor Lee’s struggle over lower Turk reflected the historic inability of San Francisco mayors to control police resources. Mayor Moscone tried and police simply stopped making arrests. That’s why Mayor Breed can only do so much. It really comes down to demanding that Chief Scott explain why the SFPD is incapable of stopping the open sale of murderous drugs in the Tenderloin. And why it has no problem preventing this in other neighborhoods.

I hope the media start asking him about the SFPD’s priorities. The Tenderloin deserves no less.