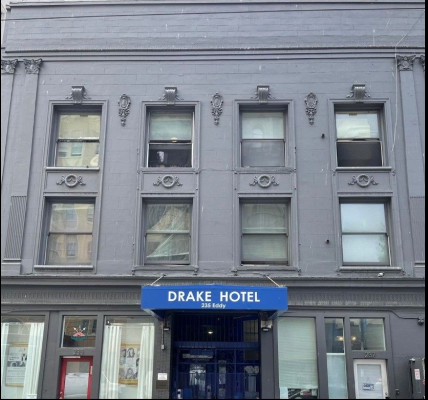 The Drake is among city's sober hotels

But the status quo isn’t working. New city homeless policies are urgently needed. Here are some that can happen soon.

Until the demand among the unhoused is met, every property San Francisco acquires with Prop C funds should be a sober home. Current homeless policies make sober living too hard to obtain for the unhoused.

Why is San Francisco not already doing this? Supervisor Ahsha Safai has championed sober housing. Mayor Breed has arranged funding for some sites. But its way too small scale and underfunded.

San Francisco needs to go big on recovery and sobriety.

All of the existing HSH-funded permanent supportive housing properties will remain non-sober. So those who want to use alcohol and drugs will have ample opportunities for housing that allows this. But given the current scarcity of sober hotels, future acquisitions should mandate a clean and sober environment

Sober hotels also cut down the drug market for nearby dealers.

In addition to adding  exits from homelessness the city should resume its step up housing program. This  moves formerly homeless residents of SROs who lack private bathrooms into high quality all private bath hotels like the Abigail and Bristol. Step up housing can also provide sober hotel options for those currently living in permanent supportive housing.

Step-up housing adds to the overall affordable housing supply by using smaller properties that don’t work for full service SROs. Since those moving into step-up housing create vacancies in their former rooms, the strategy further increases capacity for the unhoused. Step-up housing is also far more cost effective because tenants do not require the level of on-site services.

When I last checked the city’s permanent supportive housing supply had 600 rooms ready to rent but sitting vacant. That’s unacceptable. With so many people lacking homes we can’t have 600 vacancies (and this does not count rooms vacant due to disrepair).

I explained why SRO permanent supportive housing vacancies “exploded” in 2019 (“San Francisco’s Failed Homeless Strategy,” February 23, 2021). HSH has not fixed this vacancy crisis. I suggest a Board of Supervisors committee require HSH to provide bi-weekly reports on filling these vacancies as this will bring attention to the crisis.

I heard from a landlord last week about the large number of vacant BMR units in their building—which have been vacant for a year! The city has epic waiting lists for affordable housing and the Mayor’s Office of Housing (MOH) can’t figure out how to fill vacancies?

Nonprofits dependent on MOH action report similar delays. Why does San Francisco have a dysfunctional operation for filling affordable housing units? How about pre-qualifying those on waiting lists so they can occupy vacant units within a month?

This is another area where a Supervisors committee must take ownership. This problem precedes Mayor Breed but her administration is perpetuating it. San Francisco can pass a vacant unit tax but what about all the vacant BMR units that everyone wants filled but stay vacant due to city inaction?

Nonprofit providers and advocates have long pushed for the city to acquire facilities for those unable to effectively function in the standard permanent. Instead, San Francisco sends people to traditional sites where the tenant then causes harm to themselves and others.

The problem has worsened as the unhoused population has become more challenging. These problem tenants make life miserable for those around them and the staff that tries to help; yet the city does not want to spend the money to appropriately house this population. The city also figures (correctly) that the media will blame the nonprofit service provider for any problems these high need tenants cause.

I can’t think of a single media story  about the need for San Francisco city government to stop sending very troubled people to housing not suitable for them. Reporters find it easier to blame the housing provider.

Prop C gives San Francisco enough money to provide suitable homes for the high-service need unhoused. Our streets tell the story of the city’s failure to serve this population.

The Problem is Not Outreach

San Francisco must stop making believe that most people are on the street due to a lack of outreach. In fact, there’s so much overlapping outreach that services have been offered to people time and again and most aren’t interested.

So why do we promote the outreach fiction? Because it enables us to avoid the real challenge: how can San Francisco deal with unhoused people who reject housing or shelter? People who do not want to pay rent?

San Francisco has long preferred avoiding this question. We instead talk about the vast majority who want housing. But those rejecting services block sidewalks with tents and  make life more difficult for those living in lower-income neighborhoods.

It’s time for San Francisco politicians to honestly address how the city should respond to people who reject all services.  As with the other ideas raised above,  San Francisco’s homeless strategy needs to   get off auto-pilot—sticking primarily with the status quo will not make the necessary progress.