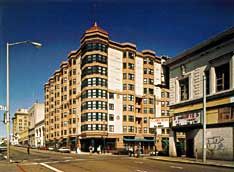 Momentum is building for a new affordable housing strategy in San Francisco, as people recognize the inadequacy of the city’s inclusionary housing law (see “Land Use Hears Housing Report,” below). The current law requires too little of most developers, fails to help those most in need, allows developers to pay into a fund instead of ensuring affordable units get built, and does not require that any affordable units are rented to families with children. With federal cutbacks in affordable housing on the horizon, the Board of Supervisors must enact a new law.

After spending two years working out deals with private developers on a project by project basis, the Board of Supervisors appears ready to enact a new inclusionary housing law. This effort has been recently spurred by Board President Aaron Peskin’s comments on the need for a more effective law, as well as efforts by Jim Meko and the SOMA Leadership Council to bring together diverse constituencies to examine strategies for building more working-class housing.

Most of the discussion about a new law centers upon the development formula. Supervisor Daly’s success at getting developers to provide affordable housing at 25% and 34% of their projects confirms the inadequacy of the current 12% requirement.

Rather than impose a blanket percentage on all projects, the new law should keep the 12% requirement for projects between 10- 20 units while requiring 20% for projects between 21-99 units and an additional 5% for every additional fifty units until capped at 34%. Currently, developers of a 20 unit building provide the same percentage of affordable units as for a 200unit project. This ignores the financial reality that the larger the project, the easier it is for developers to cover the cost of providing below-market rate units.

Another problem is that the current law does not benefit anyone earning less than 60% of area median income. When the law passed, the 60% figure was praised as better than the standard 80% of median. But the 60% of median no longer works when a studio apartment “affordable” at this income level costs $998 with utilities.

The income level of 40% of area median now targets the population that the 60% of median was supposed to serve. The Supervisors could either lower the requirement for all units from 60% to40%, or simply allow developers to provide an equal number of units at 40%, 60%, and 80%.

The Board must also prevent developers from meeting their affordability requirements by paying an in-lieu fee to the Mayor’s Office of Housing. This fee is based on a calculation of the cost of building the required number of affordable units, but payment of the fee does not create housing units until years after the market rate project is built.

The Planning Department’s study of inclusionary housing revealed that developers prefer the in-lieu fee; but it brings the least number of affordable units to the city. Since the in-lieu payment can be delayed until the day before the permit of occupancy on the market rate units is issued, it is years later before any affordable housing connected to the project is actually occupied (in contrast, affordable units built off-site must be completed before the market-rate project opens).

In addition, the nonprofit groups building housing with the in-lieu payments cannot build anywhere close to the number of units that would be created with the same money by a private developer. So regardless of the percentage of affordability the in-lieu fee is supposed to represent, fewer units always result.

The best argument for preserving the in-lieu fee is that it at least creates the opportunity for building affordable housing for families with kids. In contrast, developers providing on-site affordable one or two bedroom units are free to rent or sell to two single adults, and Latino families with children are far less likely be selected to live in such below market rate units.

The solution to this problem is for the Supervisors to require developers of two-three bedroom units to rent or sell their affordable units exclusively to families with children. This would guarantee that the inclusionary housing law helps working-class families, and eliminate the chief need for the in-lieu option.

Although the Mayor recently created a Task Force to examine how to keep families with children in San Francisco, he has not called for redirecting more affordable housing funding toward the working-class families driven from the city by high rents.
Amending the city’s inclusionary housing law could help address this critical problem.

The debate over the need fot a new inclusionary law has gone on long enough; it is time for the Board of Supervisors to act.