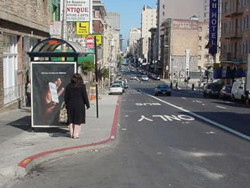 Five years after the San Francisco Board of Supervisors enacted a key transit plan to make the Tenderloin more pedestrian friendly, the project’s first phase is in limbo. The first phase of the Tenderloin/Little Saigon Transit Plan began in September 2010, with large signs posted throughout the neighborhood saying it would be completed by October 28, 2010. But the project’s creation of two-way streets on Ellis and Eddy west of Leavenworth never happened. Even worse, the plug was pulled without explanation. In multiple e-mails from summer 2011, MTA committed to resuming the project by mid-January 2012, but that did not occur—and as of today, nobody is clear why. Input from Tenderloin residents who attended community meetings and filled out surveys in 2005 produced the Plan, yet nearly seven years later MTA acts as if the entire process, including the city’s enactment of the plan, never happened.

It’s time to issue a missing project report on the Tenderloin-Little Saigon Transit Plan, promoted by residents to reduce traffic speed in the pedestrian-filled residential neighborhood. Neither District Six Supervisor Jane Kim nor the Mayor’s Office has been able to clearly understand why MTA abandoned the project, and new SFMTA head Ed Reiskin is still trying to get to the bottom of the mystery.

It’s been clear for some time that Reiskin inherited a highly dysfunctional agency from his predecessor, Nathaniel Ford. Ford and his crew were not much interested in neighborhood transit projects that did not involve buses or streetcars.

Unfortunately, the Tenderloin-Little Saigon plan began under Ford. And, if residents could trust the posted signs, should have been completed under Ford.

Betrayal of a Neighborhood

I have been trying to get the first phase of the Tenderloin-Little Saigon Transit Plan completed since work stopped over one year ago. And I have a huge number of e-mails trying to get answers from what is unquestionably among the most unresponsive city agencies I have dealt with in over three decades working for the Tenderloin Housing Clinic.

I was surprised as anyone back in 2005 when neighborhood residents overwhelmingly told focus groups and filled out questionnaires saying that changing Eddy and Ellis to two-way streets was a top priority. I did not understand the importance of the shift at the time, and recalled asking people why they saw this as so important.

I got the message. Study after study shows that two-way streets reduce traffic speeds and increase business activity as drivers are more likely to see retail shops rather than just rushing through the neighborhood. Both Eddy and Ellis Streets were two-way from the time of construction into the 1960’s, when planners made them one way to speed traffic to downtown.

But after the Board of Supervisors enacted the Tenderloin-Little Saigon Transit Plan in 2007, nobody in the Tenderloin stayed abreast of its implementation schedule. Instead, my office began meeting with SFMTA in the summer of 2010 to get cost estimates for implementing the entire Plan as part of the traffic mitigations for the proposed new CPMC hospital.

During this time we saw signs around the neighborhood which announced that Phase 0ne of the Plan would commence in September 2010 and be completed October 28, 2010. Phase One’s commencement was also news to the transit planner reflecting an informational disconnection that has typified the project.

I wish we had taken pictures of those signs, which stayed up well beyond the stated finish date.

SFMTA staff was thrilled about the project’s commencement, but the poor communication between the agency’s planners and either DPW or whoever else was actually managing the project continued. I kept being assured that everything was “on track;” what I did not gather was that this track led nowhere.

I initially assumed that this was another example of the Tenderloin not getting its fair share of city infrastructure dollars – along the lines of our having only a fraction of the standard number of street lights for other residential neighborhoods (and we’d even have fewer lights if Mayor Ed Lee in his former job hadn’t taken the initiative to install some on Taylor and Mason Streets).

But I learned in talking to others that MTA’s problems extend to other low-income neighborhoods. Again, under Nat Ford, anything outside getting public transit to move faster was not a priority.

A State of Limbo

If we ever find out why MTA unilaterally abandoned completing the first phase of the Tenderloin-Little Saigon plan, my guess is that the project was funded for the 2010 budget year and when it was not completed the money was shifted elsewhere. District Six recently saw millions of dollars transferred to District Nine without a branch of MTA even notifying Supervisor Kim, so shifting Tenderloin-Little Saigon funds would be par for the course.

If a deal between the city and CPMC is ever reached, funds to make all of Eddy and Ellis two-way streets will be available. But the community’s and city’s “ask” of CPMC was only to fund the area east of Leavenworth, because Phase One to the west was supposed to have been long completed.

Back in 2010, MTA planners were apologetic that three years after the Board of Supervisors passed the Tenderloin-Little Saigon Transit Plan, only the small first phase was going forward.

And it’s now clear that the MTA could not even manage that.