San Francisco Mayor’s Race is Off and Running 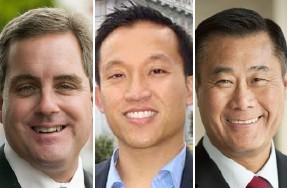 It’s eight months before San Francisco’s mayoral election, with the eventual winner already in the field. While a candidate identified with the city’s political Left still may emerge, the current frontrunners are Board of Supervisors President David Chiu, City Attorney Dennis Herrera, and State Senator Leland Yee. Former Supervisors Bevan Dufty and Michela Alioto-Pier and Assessor Phil Ting will shape the outcome due to ranked choice voting, but none have reached the top tier. This is the first time since 1975 where there is no clear favorite in the Mayor’s race, but keep in mind that Jack Molinari in 1987 and Art Agnos in 1991 were heavy favorites in March and both lost. Here’s my assessment of the major upsides and challenges affecting the three current leading contenders.

2011 is shaping up to be the second consecutive San Francisco Mayor’s race where no candidate has a lock on the progressive vote. While the absence of such a consensus figure as Tom Ammiano or Matt Gonzalez, or even an Art Agnos circa 1987 may disturb some, it also means that candidates will be competing for progressive support as never before.

Starting alphabetically, David Chiu enters the race with a reputation as a consensus-builder, strong fundraiser, and with a strong claim on the increasingly significant Asian-American vote. Chiu can attract votes from a wide range of constituencies, and will have support among African-Americans after being the only sitting Supervisor to back African-American Malia Cohen in District 10 (Yee also endorsed Cohen, who has not made an endorsement in the race).

Chiu has another advantage over his rivals: he can use 2011 to cast votes that build support for his mayoral campaign. For example, he can greatly bolster his progressive support by helping to derail the poorly conceived plan to demolish 1500 units of sound rent-controlled housing at Parkmerced, and by working out a fair community benefits agreement around the proposed new California Pacific Medical Center (CPMC) slated for Cathedral Hill on Van Ness.

Both proposals could be described as “too big to fail.” Yet tenant groups strongly oppose displacing 1500 tenants (over 400 have lived at Parkmerced for over ten years) for newly built housing that, unlike the situation that faced tenants at Trinity Plaza, is not superior –
or preferable – to their current homes. With city policy opposing the demolition of sound rental housing, Chiu’s actions will either boost or weaken his progressive support.

Chiu has been publicly critical of CPMC’s current negotiating posture, and will benefit enormously if he can help resolve the increasingly contentious struggle between community groups and the hospital giant. Chiu could turn CPMC into a case study for his ability to move the city forward as mayor.

As I have previously written, San Franciscans have historically not elected mayors who were newcomers to local politics. Matt Gonzalez is the closest analogy to Chiu, but his near upset victory over Newsom in 2003 included the citywide activist Green Party’s strong support and a uniquely charismatic candidate who was able to attract substantial support beyond the progressive base. And while Gonzalez was only in his third year as supervisor, he was highly regarded in legal circles through his longtime work as a public defender.

Chiu also must convince the city’s progressives that he can be trusted to support their agenda. This means winning the backing of Supervisors David Campos, John Avalos, and Ross Mirkarimi, all of whom are trusted by the city’s Left (progressive Eric Mar has already endorsed Chiu). Campos has stated that he does not view Chiu as a progressive, and Chiu needs to bolster his progressive credentials in 2011 to overcome suspicions among progressive voters.

As my colleague Paul Hogarth has noted, Chiu also needs to increase his gay and lesbian support. This will not be easy given Herrera and Dufty’s support among gay and lesbian voters, but Chiu needs to at least be the second choice of many to win.

Dennis Herrera may be the most effective City Attorney in the United States, and has a demonstrated record of being able to manage a large city department. He has enormous support in the gay and lesbian community for his skilled handling of marriage equality litigation, and will also have the backing of the city’s legal and business establishment, who see him as a solid choice who they can work with as mayor.

Herrera’s gang injunctions and his lawsuits against nuisance businesses also give him support among more conservative voters primarily concerned with crime and quality of life issues.

The biggest concern I hear about Herrera – and perhaps his chief challenge – is that people keep telling me that they do not know where he stands on issues.

For example, on perhaps the two biggest progressive issues on 2011 – Parkmerced and CPMC – I do not know where Herrera stands. I could make some calls and find out, but the point is that the general public does not know, and it’s possible that for legal reasons – both involve critical legal opinions by his office – Herrera cannot take a position on either issue.

I have been told that Herrera is out at meetings taking public stands, and he’s got several months before most voters start studying the candidates’ stances. But Herrera is competing with Chiu for progressive votes, and if Chiu gets out in front on issues while Herrera is prevented by his current job from taking a stand on these and other issues, that could hurt him in November.

Leland Yee has a long history of winning elections and is a prodigious fundraiser. He has a solid base on the city’s Westside, and will be labor’s primary choice in the Mayor’s race (the Building Trades have already endorsed him, and he is the favorite to get the endorsement of public employee unions.)

Like Chiu, Yee can also use his current position to garner campaign support, which anyone on his press release list – his office issues multiple releases daily – knows that he has been attempting to do for some time. Yee has been courting progressives in recent years, and will have some support among those not sold on Herrera or Chiu.

Yee’s challenge is to maintain progressive support once voters learn about his long history backing landlords over tenants, and his opposition to virtually every piece of meaningful pro-tenant legislation locally and statewide. Yee was also the only Democrat in the State Assembly in 2003 to oppose fellow San Franciscan Mark Leno’s bill protecting Single Room Occupancy Hotels (SRO’s) from the state Ellis Act – a bill that only passed by one vote.

When the media and his opponents start uncovering Yee’s other votes as a Supervisor, he will have a hard time winning progressive support for Mayor. In a field with Herrera, Chiu, and Phil Ting, Yee is likely the fourth most progressive candidate in the race.

Yee could potentially win the election by sweeping the Westside and conservative voters citywide, and taking just enough moderate and progressive votes to prevail. His success likely depends on his ability to overwhelm Chiu among moderate Asian-American voters, and to defeat Herrera among Pacific Heights and Marina voters (whose first choice may be Alioto-Pier) and among voters in Districts 10 and 11 primarily concerned about law-and-order issues.

While none of the current frontrunners share the charismatic qualities of former Mayor Gavin Newsom, this lack of flash will actually help them this November.