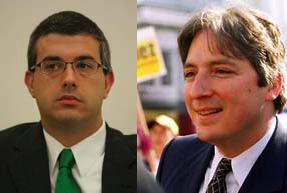 Matt Gonzalez’ revealing interview in our pages last week eliminated much of the speculation surrounding San Francisco’s 2007 Mayor’s race. Gonzalez strongly hinted he was looking to run, but would not be prepared to begin his candidacy on June 2, the date Supervisor Chris Daly picked for a “progressive convention” to select a mayoral candidate. Some onetime Gonzalez supporters believe that his stand has undermined the convention, since the progressive with the best chance of seriously contesting Mayor Newsom will not submit his name for consideration that day. Is this much ado about nothing, since Newsom is widely seen as unbeatable in November, or does Gonzalez, as in 2003, have a better sense of voters’ desires than political insiders?

Those attending Chris Daly’s “progressive convention” next Saturday will face a choice: nominate Daly as mayor that day, or take no action while awaiting Matt Gonzalez’ July or early August entry into the race. The former action would not forestall the latter, as Daly could enter, start building a campaign organization, and then turn it over to Gonzalez in two months.

Based on reactions I have gotten to Matt’s interview, not all progressives are happy with him these days. Some feel that he left the fight against Newsom when he did not seek re-election in 2004, and that he is now undermining the person—Daly—who has come to embody anti-Newsom politics in San Francisco.

Of course, Gonzalez also alienated some progressives when he entered the 2003 mayor’s race. He was even subjected to charges of “homophobia” for entering a race where Tom Ammiano was already a candidate.

Now Gonzalez is being attacked because he wants to run a mayoral campaign on his own schedule, not the timetable others want. Unless he told Daly that he would be available to run on June 2—and there is no evidence of this—than the rancor toward Matt’s unwillingness to start a campaign on that date is clearly misplaced.

First, there are those who believe that there is no point to running a candidate against Newsom since a) he has governed from the center-left since getting elected and b) his re-election is a virtual certainty.

Second, there are those who believe that a challenger is needed to expose the deficiencies of the Newsom Administration, given the corporate media’s failure to do so. This camp believes that challenging Newsom will force the mayor to either become more truly progressive, or expose him as a corporate-controlled moderate who steals and then dilutes progressive policies.

Those urging Chris Daly to run for Mayor are in this camp. Their feeling is that since Newsom is going to win in November, progressives should run someone who knows where the proverbial bodies are buried and will not hesitate to call the mayor out

The third group includes those who believe that Newsom’s re-election is not a done deal, and that the right candidate and campaign could send the incumbent’s poll-numbers crashing. These folks want Matt Gonzalez to run, and see a Daly candidacy as leading to a landslide Newsom victory that weakens and splits the city’s political left.

An important difference between the latter two groups is the nature of the campaign they envision. If the sole goal were defeating Newsom, then Gonzalez is the best candidate and winning would require the type of massive grassroots effort Gonzalez mounted in 2003. But if progressives are reluctant to run such an all out campaign because they believe it will lose, and are content with an “educational” campaign, then the June 2 convention should proceed with selecting Daly and not worry about Matt’s future plans.

Although my own views lie closest with the first camp, the most interesting question is whether Gonzalez’ assessment of Newsom’s vulnerability is correct. Matt’s instincts were certainly more accurate than anyone’s when he decided to run in 2003, and he is talking about a much different campaign for 2007.

Analogizing San Francisco in 2007 to Los Angeles in 2005 is not accurate, as Newsom is far more popular than former Los Angeles Mayor James Hahn. But there is a parallel between Antonio Villaraigosa’s decision to run for mayor in 2005 and Matt Gonzalez’ potential candidacy this year.

Villaraigosa and Gonzalez both surprised political observers with their making mayoral runoffs in 2001 and 2003. Both then lost narrowly. Villaraigosa ran for City Council after losing the Mayor’s race and pledged to not run for Mayor in 2005; since the powerful LA County Labor Federation chiefly responsible for Villaraigosa’s strong 2001 campaign was in Hahn’s camp, most assumed that the onetime challenger lacked the core support necessary to defeat Hahn in 2005.

But Villaraigosa surprised everyone by seeking to broaden his support throughout the city. He was even accused of neglecting his labor and Latino base. He ended up winning easily over Hahn despite the fact that nobody had given him a chance a year earlier.

As noted, Gavin Newsom is not the bland, boring James Hahn. His poll numbers show none of the vulnerability that Hahn showed.

But Gonzalez’ talk of winning votes on the West Side, and his focus on broadening his base, has some similarities to Villaraigosa’s winning strategy.

We should learn on June 2 whether progressives who want to challenge the mayor still have confidence in Gonzalez’ political judgment, or whether they see Daly’s candidacy as serving their needs.