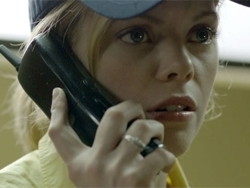 Come late April, the San Francisco International Film Festival (SFIFF)’s 55th edition will delight viewers new and old with two weeks’ worth of entertaining and thoughtful cinema from around the world. This preview will hit some of the highlights from a program featuring 174 films from 45 countries.

Inaugurating this year’s festival is the timely French film Benoit Jacquot’s “Farewell, My Queen.” The Queen, Marie Antoinette (Diane Kruger), and her court attempt to deal with the repercussions of the Bastille’s fall. Dramatic focus is provided by the relationships among the Queen, the despised Madame de Polignac (Virginie Ledoyen), and Marie Antoinette’s personal reader Sidonie (Lea Seydoux). Pro-French Revolution wags may mutter “Farewell, my Queen/See you at the guillotine.”

What links Mike Tyson with The Dixie Chicks? It’s this year’s Persistence of Vision Award winner veteran documentarian Barbara Kopple. Her subjects have ranged from culture to politics and sometimes both. Ms. Kopple, in addition to receiving the award, will present a screening of her seminal film “Harlan County USA,” her riveting documentary portrait of a miner’s strike.

Another SFIFF tradition has been a program pairing a silent film with a live instrumental soundtrack provided by a contemporary musical act. Previous acts have included Dengue Fever, Lambchop, and Tindersticks. This year, acclaimed Oakland-based musician Merrill Garbus and her band tUnE-yArDs (accompanied by guitarist Ava Mendoza) will perform a new soundtrack for a quartet of short Buster Keaton films.

Several previously reviewed films from the recent Sundance Film Festival are also part of the SFIFF program. Ra’anan Alexandrowicz’ Sundance World Documentary Award winner “The Law In These Parts” provides an inquiry into how the Israeli government’s application of their special laws for the Occupied Territories frequently undermined Palestinian interests.

Rory Kennedy’s warm and loving documentary “Ethel” is both a biography of the filmmaker’s mother and an intimate backstage look at life with the late Robert F. Kennedy. David France’s powerful must-see documentary “How to Survive a Plague” uses previously unseen video footage to tell the story of how ACT-UP’s aggressive direct action tactics literally changed AIDS from a death sentence to a treatable condition.

Other must-sees from Sundance include Kirby Dick’s Sundance Audience Award winner “The Invisible War,” a powerful look at the unacknowledged epidemic of rape of female American soldiers by their male counterparts. The documentary “The Queen of Versailles” is not another biography of Marie Antoinette. Instead, Lauren Greenfield’s film is a portrait of a couple whose plans to build a McMansion and make a fortune in real estate run afoul of the bursting of the 2008 housing bubble. Craig Zobel’s polarizing “Compliance” adapts a 2004 incident from a Kentucky Mc Donald’s into a parable about people’s gullibility in submitting to authority.

Speaking of the perils of obeying authority, FBI informant Brandon Darby managed to mentor two naïve young men into prison sentences for plotting terrorism at the 2008 Republican National Convention. This tale was recounted in last year’s SFIFF award-winning documentary “Better This World.” Now Jamie Meltzer’s documentary “Informant” gives Darby the opportunity to be the hero of his own life story. Unsympathetic and masochistic viewers are advised to bring their own vomit bags.

Sam Green, who wowed a previous SFIFF with his live documentary “Utopia in Four Movements,” returns with his newest live documentary piece “The Love Song of R. Buckminster Fuller.” This film looks at the proposed Bay Area building projects of a man who sought to create radical change through architecture. Providing a live soundtrack will be famed indie band Yo La Tengo.

Acclaimed novelist Jonathan Lethem, the author of “Motherless Brooklyn” and “The Fortress of Solitude,” will give this year’s State of Cinema address. His speech will consider how the Occupy Wall Street movement, YouTube, and mumblecore films can transform both cinema and even our daily lives.

This year’s Mel Novikoff Award goes to a man whose name will be unfamiliar to the general public. The name Pierre Rissient may draw blank stares, but to the likes of Clint Eastwood and Quentin Tarantino they have good reason to respect him. This man has a career which stretches back to the formative days of France’s nouvelle vague. He has rescued the John Fords and Samuel Fullers of cinema’s past from the cruelties of time’s obscurity. Equally importantly, Rissient has found and helped bring to the Cannes Film Festival such then-new directors as Tarantino, Abbas Kiarostami, and Jane Campion.

Fans of Hong Kong genre filmmaking have two treats in store. Johnnie To’s “Life Without Principle” looks at how aftershocks from the Greek economy’s 2010 collapse sends three different men in pursuit of a bag of stolen money. The Hong Kong Film Critics Society honored the film with awards for Best Actor (Lau Ching-wan) and Best Screenplay.

Despite its title, Peter Ho-Sun Chan’s “Wu Xia” is not a balls-to-the-wall martial arts action film. Instead, the film pits supposedly simple papermaker Donnie Yen against detective Takeshi Kaneshiro in what might loosely be described as “’A History Of Violence,’ but with martial arts.”

Other veteran filmmakers returning with new films include award-winning documentarian Jessica Yu (“Last Call At The Oasis,” a look at the world water crisis), Mathieu Kassovitz (“Rebellion,” about hostage negotiations between a French counterterrorism captain and his rebel counterpart), Joachim Trier (“Oslo, August 31,” which loosely adapts the same novel that Louis Malle’s “The Fire Within” is based on), and Andrea Arnold (“Wuthering Heights,” a grittily loose adaptation which may annoy Bronte purists by making its central couple interracial).

Readers are encouraged to check out some of the other films and programs which have not been mentioned here. Whether it’s Francis Ford Coppola’s return to genre filmmaking with “Twixt” or a presentation by cartoonist journalist Susie Cagle, there is bound to be something which will interest them.

(The 55th San Francisco International Film Festival runs from April 19, 2012 to May 3, 2012 at various venues in San Francisco and Berkeley. For further information and advance tickets, go to www.sffs.org.)