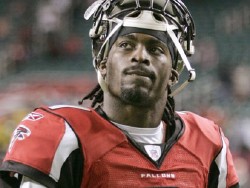 Michael Vick medical reports tend to be fungible, like Vietnam War body counts. But as this article was being written, he was assuring one and all of the “100 percent chance” that he will start Sunday’s game at quarterback for the Philadelphia Eagles. Since the 49ers are the Eagles’ opponent, Bay Area television viewers will be complicit in the next rubber-necking twist of the increasingly grotesque Vick saga.

Two weeks ago he got knocked silly when he was thrown into his own lineman in a nationally televised game. However, the National Football League’s cowardly partners at NBC didn’t dare call it a concussion. The “C” word, you see, is nearly as taboo as “Voldemort” was for Harry Potter’s friends.

After an “independent neurologist” cleared him, Vick got rushed back to the starting lineup last Sunday. My pleas to the Eagles and the NFL to provide the name of this vigilant descendant of Hippocrates went unheeded. Where did the I.N. get his medical degree, I wonder – a correspondence course in the Bahamas?

Perhaps the “independent neurologist” will apply for a position on the panel of experts soon to be appointed by the federal Centers for Disease Control and Prevention, and charged with developing national guidelines for management of concussions in school sports programs. If he’s not available, then I’m sure Joseph Maroon of the Pittsburgh Steelers, the University of Pittsburgh Medical Center, and World Wrestling Entertainment – whose team carefully reviewed Vick’s neurocognitive results last week against his “baseline” tests – will be glad to buckle up his chin strap.

Even before Vick got knocked out of the game with the New York Giants by a hand injury, he was fuzzy and ineffective. “Not right today,” “just didn’t seem like he was 100 percent,” “something was off,” Fox professor of footballogy Howie Long mumbled.

Vick first complained that NFL refereees weren’t giving him his fair share of roughing-the-passer penalties. Then he took it back.

The Eagles first said Vick’s right (non-throwing) hand was broken. On Monday they said nah, it was just a boo-boo. Darn that ancient and unreliable X-ray technology!

So the next installment of the Vick soap opera, “As the Stomach Turns,” resumes on schedule. “From where we sit — contusion or break — Michael Vick must sit this week. He needs to get his mind and hand right,” Philadelphia blogger-columnist Frank Ward wrote. From where we sit, in front of our TV screens, he has to play. There are NFL standings and fan-league fantasy standings at stake. I wish Vick no ill, but if more comes his way, the opportunity to educate should not be missed.

Tony Basilio, a radio sports-talk host in Knoxville, Tennessee, who has interviewed me about pro wrestling, encouraged me to keep it up. “What Philly did with Vick disgraceful,” Basilio wrote on Twitter. “Somebody’s going to die on an NFL field soon.”