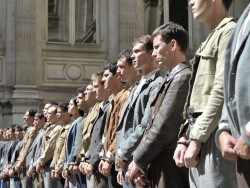 Guediguian’s film begins in 1944 Paris as a group of men and women are taken to be executed. Their common denominator seems to be their foreign surnames. The rest of the film then becomes a flashback which fills in the details.

It’s 1941 Paris. France has comfortably settled into having Nazi soldiers casually walk through its streets and enjoying the local brothels. Communists may get harassed and Jews may get deported somewhere, but who cares about them? For many French people, collaboration with their foreign occupiers doesn’t interfere with their ordinary lives.

There are objectors to the Occupation. Some engage in self-denial that “the land of human rights” can ever descend into torture and worse. Others engage in small acts of rebellion, such as the random slaying of an unwary German soldier. Still others just try to survive the worst of the Occupation.

One such survivor is given a different choice. French Armenian poet Missak Manouchian (Simon Abkarian) is given the opportunity by the Communist Party to organize a resistance cell. With his wife Melinee (Virginie Ledoyen), the poet brings together an international mix of Jews, political refugees, foreign workers, and anti-fascist veterans of the Spanish Civil War into a fighting unit. The Parisian unit engages in acts of sabotage and terrorism against the Germans and their French collaborators. However, their successes spur the French police to form a Special Brigade to hunt down and wipe out Manouchian’s resistance cell.

The presence of dramatic flourishes should not obscure the fact that the resistance unit depicted in Guediguian’s film actually existed. However, according to the press notes, the unit has been largely forgotten by history. “Army of Crime”’s treatment shows why that historical amnesia occurred.

Admittedly, there are frequent scenes of German soldiers blown up or shot to death. Yet the filmmaker is not interested in depicting macho heroics or romanticized resistance to the invader. The closest such macho character, Thomas Elek, is portrayed as a reckless liability to the unit’s safety. Instead, Guediguian focuses the film on how people react to living under foreign occupation. Do they meekly go along and hope nothing bad happens to them? Do they cooperate with the new order in the interest of public safety or personal survival? Or do they risk their lives and their freedoms fighting for a goal they might not live to see?

The wonder of Guediguian’s film is that he gives equal time to this spectrum of reactions. On the downside, many of the characters’ internal lives consequently remain sketchy. But the script’s broad dramatic strokes gives the viewer looking at the film’s huge cast of resistance members and collaborators a sufficient working understanding of the various characters’ motivations.

That said, Missak and Melinee provide the film’s dramatic focus. Missak’s dramatic arc shows how circumstances can change someone with personal objections to killing into a man who can plan an assassination of a high-ranking German officer. Particularly effective is the sequence where the poet takes a human life for the first time. An effective mix of camera shots, staging, and suspenseful music contribute to this effect.

Melinee takes on several roles over the course of the film. She’s a confidante for such secrets as Missak’s moment of personal weakness, which one suspects compels him to agree to head the partisan unit. Her work as part of the partisan support staff ranges from inventively using home music practice to supplying an improvised grenade pin. But her major emotional role is her love and loyalty to Missak, best expressed in her willingness to travel to her husband’s countryside prison to deliver a decent meal to him. Ledoyen makes the viewer believe in her character without the need for explanatory dialogue.

Guediguian also doesn’t rationalize the actions of Missak’s cell. The Gestapo and their French police collaborators are justified in calling those actions terrorism. Intimidating collaborators or burning an unsuspecting busload of German soldiers to death are politically ruthless actions. Yet in Occupied France, as one character notes, “No one can be neutral now.” Should one let repression happen unmolested?

The film does offer some parallels to modern day struggles with “terrorism.” Media complicity in official repression is unfortunately timeless. Offering dark irony is a line about answering Resistance violence with “firm but merciless repression.”

However, comparing “Army of Crime” to the classic “The Battle of Algiers” does no one any favors. Both films may deal with official French responses to urban terrorism. But the script by Serge Le Peron, Gilles Taurand, and Guediguian lacks the memorable polemics of Jorge Semprun’s script for the earlier film. On the other hand, Semprun’s script didn’t have time for an emotional relationship similar to Missak and Melinee’s pairing.

“Army of Crime” still offers lessons for present-day America. This film will challenge minds conditioned to put down Communists and regard police as inherent paragons of society. Here, the Communists are the only ones actively opposing the Nazis’ vile regime. The French police are shown nonchalantly sending off Jews to German death camps or torturing a prisoner with a blowtorch flame applied to the chest.

Equally importantly, Guediguian’s film challenges the idea that only successful enterprises are worth pursuing. The odds of badly supplied partisans perpetually outrunning a numerically superior combined force of army and police were close to nil. But sometimes assuring personal glory can be far less important than doing something that was ethically right.

(“Army of Crime” premieres at the Sundance Kabuki (1881 Post, SF) on August 20, and will run for at least one week. For advance tickets, go to www.sffs.org .)