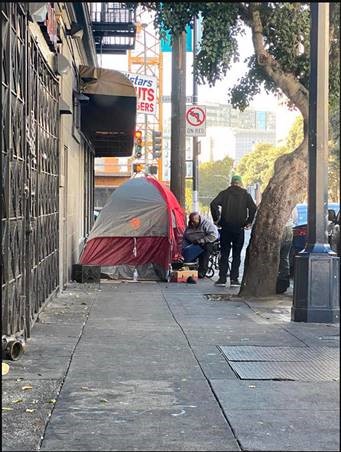 The Tenderloin, a low-income, multi-racial, kid-filled neighborhood in a gentrified city, is unequally and disparately treated in many ways. Most impactful— the Tenderloin is the only neighborhood where the city allows East Bay dealers to operate multiple open air drug dealing supermarkets. This has triggered shootings, fatal drug overdoses, and effectively closed off  Tenderloin residents and workers from walking on certain blocks.

Was there a public vote whereby progressive San Francisco selected a low-income community of color to be subject to such disparate treatment?  Or has San Francisco simply allowed East Bay drug dealers to choose where they want to do business?

The Tenderloin drug scene would never be allowed in other neighborhoods. Yet its persistence in the Tenderloin is now attributed to East Bay drug dealers overwhelming the collective power of the SFPD, DA and City Hall to protect an historic residential neighborhood.

I’m often asked why the Tenderloin was chosen to become a drug dealer containment zone. I know the answer for the Tenderloin’s early 1960’s decline—which I explain in my book—but I don’t know what to tell people about today’s situation. After all, neither Mayor Breed nor the Supervisors want the Tenderloin to be an open drug supermarket. Yet resources are not allocated to solve the problem.

Perhaps the Board of Supervisors should hold a special hearing on why its acceptable to allow open drug dealing in the Tenderloin. Let’s get the reason for this disparate treatment out in the open! Let’s stop making believe that San Francisco is some sort of passive witness to the takeover of a 31-block national historic neighborhood by East Bay drug dealers.

There are some obvious steps City Hall can take. For example, the city could start by protecting vulnerable Tenderloin small businesses from drug dealing and violence.

San Francisco claims to love small businesses, right? But the city has allowed a drug dealer to operate a tent against the glass window of  AllStar donuts at Golden Gate and Hyde from September 30 to the time of this writing (see above photo).  A few years ago its Cambodian-immigrant owner was  assaulted by hot coffee thrown at her by a drug dealer. But police still won’t adequately protect her business.

My office texted a photo of that drug dealing tent to Tenderloin Captain Chris Canning on September 30. I also spoke to him personally about it. Yet the police did not remove the tent. Instead, he texted me that he’ll “have it added to the list.”

It must be a very long list. The tent is still there as of today, nearly a month later.  I told the captain weeks ago this would not happen in any other neighborhood. I guess he’s eager to prove my point.

In case anyone forgot, the city is under a court order to remove tents in the Tenderloin. We don’t need to relitigate the blocked sidewalks, use as drug dealing centers etc. Why is the city openly violating a court injunction even when its directly brought to their attention?

I look forward to discussing this with David Chiu when he becomes City Attorney on November 1.

After Mayor Breed backed a $5 million plan to reduce Tenderloin and Mid-Market drug dealing (See “Breed Backs Tenderloin/Mid-Market Revival Plan,” May 18, 2021) I thought the Tenderloin situation would be much improved.

But here was my mistake. When the mayor announced that in addition to funding Urban Alchemy to address public safety “the SFPD will also increase deployments in the area, including foot patrols, motorcycle and bicycle deployments, and officers on horseback” I believed the latter would happen.

It never did.  I’ve had better luck playing “Where’s Waldo” than I’ve had finding any Tenderloin neighborhood foot patrols. In fact, police foot patrols are less visible now than ever before.

Urban Alchemy is doing a great job living up to its side of the job. But they can’t do it without police assistance. Potentially violent drug sites like Turk and Hyde require police intervention. Instead, the police seem content to allow a large corner on a major thoroughfare to become the dealers’ turf.

Given that San Francisco treats the Tenderloin as unworthy of equal protection, how does the city justify collecting equal property and business taxes? If drug dealers prevent you from doing business, why should you pay any taxes to the city at all?

I regularly hear from business owners and owners who ask, “Why does the city allow this?” Many have invested heavily in trying to bring quality businesses to the Tenderloin. They are losing faith in the city’s willingness to act.

I can tell them that I think the community’s efforts to improve the situation will eventually succeed. But there’s no specific end in sight. Many parts of the Tenderloin are fine but Hyde is terrible along with Jones and McAllister, Larkin between Turk and Eddy and the 600 block of Eddy.

At least if all business taxes were waived owners could use their savings to hire private armed security guards (the waiver could be tied to that purpose). This seems the only way for businesses to thrive in the Tenderloin given the lack of SFPD and District Attorney commitment to clearing the drug trade.

Progress in Near Future?

The expansion of the Urban Alchemy program to more Tenderloin blocks will make a huge difference. So will the return of city workers on November 1, which brings positive foot traffic and lunch business to Little Saigon and other Tenderloin spots.

The opening of new housing on the Tenderloin’s Market Street border will help, as will Mid-Market coming back to life. Plus the Tenderloin still has a great selection of restaurants and bars—La Cocina’s Municipal Marketplace, the Black Cat, Son and Garden, Whitechapel to name a few)—cultural destinations—the Tenderloin Museum, Piano Fight, CounterPulse, Exit Theater, Cutting Ball Theater  —-and a brilliant collection of murals, many painted during COVID.

The Tenderloin also has 409 buildings on the national register of historic places. Its place in the city’s history makes the decision to hand the community over to East Bay drug dealers even more troubling.

The past 18 months have reminded us of one critical fact:

If any equity is going to be restored in the Tenderloin it will have to come from the residents, workers and owners there. It’s up to Tenderloin activism to drive its revival.