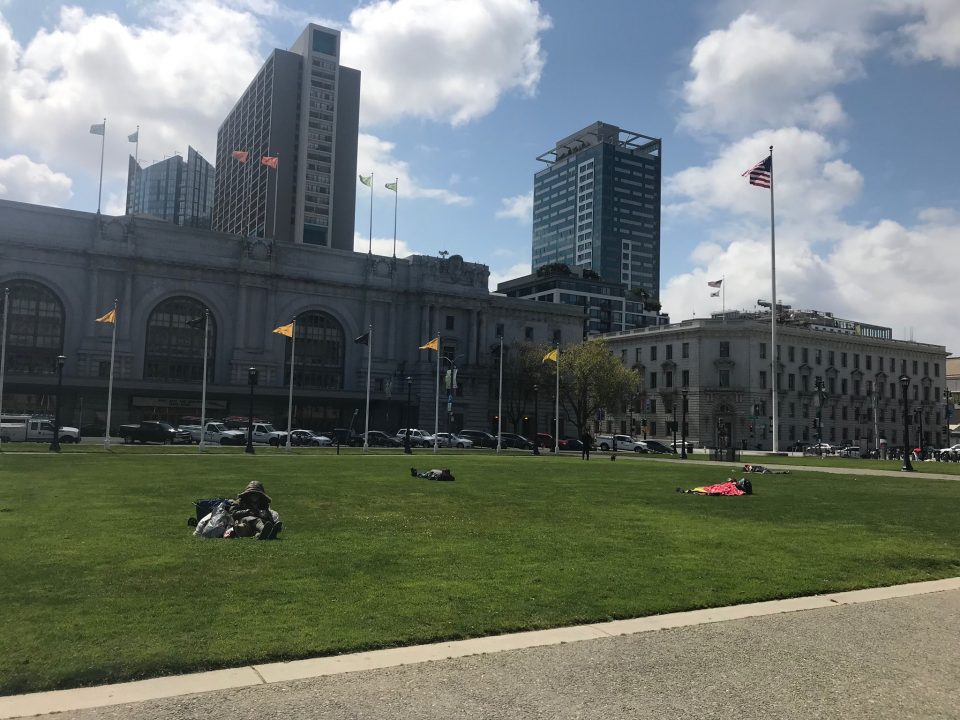 SF must shift tents in Tenderloin to Civic Center Park

There were 232 tents in San Francisco’s Tenderloin yesterday morning. That’s by design. The city is  converting the working-class neighborhood into a containment zone for drug dealers and the unhoused.

That’s why Tenderloin residents and workers are not applauding the city’s “success” at social distancing. This “success” has all the authenticity of former NYC Mayor Rudy Giuliani’s “success” at reducing homelessness.

Giuliani’s police rounded up the unhoused from Manhattan and dropped them in the Bronx. Since most tourists only visit Manhattan,  they were astonished at the lack of the visibly unhoused. Many concluded that Guiliani had done what other cities could not: sharply reduce homelessness. San Francisco officials returning from New York City routinely asked me why our city couldn’t match Giuliani’s results: my answer was that we couldn’t use Daly City to deposit our unhoused like Giuliani used the Bronx.

I thought of Giuiliani’s strategy after seeing the video, “San Francisco Shutdown.” It has over 470,000 views. The Tenderloin, only blocks from City Hall and in the heart of the city, was excluded. It had to be. Otherwise, the video’s portrayal of San Francisco’s people-free sidewalks would be exposed as a fraud.

In fact, the same video showing a low-income neighborhood whose sidewalk crowding equals or exceeds  pre-pandemic levels would have sent a very different message. People across the nation would be questioning why “progressive” San Francisco as a matter of policy endangers Tenderloin residents and workers. And challenging the city for jeopardizing the health and safety of  low-income, ethnically diverse residents to better protect the affluent.

SF Park and Recreation Director Phil Ginsburg recently tweeted out photos of city parks clear of people. But this social distancing victory came at a price: even well before the pandemic people in tents were cleared from Golden Gate Park and Civic Center Park but allowed to pitch tents in the Tenderloin.

After the pandemic began,  the SFPD cleared tents from UN Plaza while the city allowed them in the Tenderloin. UN Plaza was apparently perceived to threaten social distancing for city workers, many of whom now work from home. The SFPD cleared UN Plaza knowing full well that many of those dispersed would end up in the Tenderloin—and that the city would allow them to stay there  (the police were just following orders).

Think about that. After the shelter in place order the city prioritized removing tents and breaking up crowds in UN Plaza— where no low-income children live—while shifting those dispersed to the Tenderloin, a large residential neighborhood.

Does anyone outside City Hall really believe that there are 232 tents in the Tenderloin because that’s where the unhoused most want to be? As opposed to occupying the only place in San Francisco where City Hall will allow them to be?

Families walking down Tenderloin sidewalks cannot put six feet between themselves and the occupant of the tent. Many tents take up half the sidewalk and are located far closer than six feet apart. The city’s policy of encouraging tents on Tenderloin sidewalks has effectively quarantined Tenderloin residents in their homes.  The lack of social distancing means that even going outside on the sidewalk puts their health at risk.

Healthy Streets Operations Center director Jeff Kositsky recently told Phil Matier of the San Francisco Chronicle that the unhoused are in the Tenderloin because the people on the street “are their family.” So why is the city breaking up these “families” in other neighborhoods? I sure don’t see tents and encampments in Kositsky’s own home neighborhood of Bernal Heights.

Why does the city’s concern with keeping families of tent dwellers together only apply to the Tenderloin?

The Tenderloin/North of Market Community Benefits District (TLCBD) sent a letter to Mayor Breed and other city officials last week highlighting the safety concerns of their sidewalk cleaning staff due to the lack of social distancing. The TLCBD recommended “sanctioned, serviced and organized open fields such as the Civic Center lawns as places for people to shelter in place in tents.”

That makes perfect sense. And follows San Francisco’s strategy following the 1906 earthquake and fire, where parks were used to house people.

But today’s San Francisco prioritizes a pristine Civic Center Park over protecting the  health and safety of Tenderloin families. The city prefers to keep Tenderloin children and other residents trapped in their often very small homes to moving sidewalk tents to nearby and more appropriate green space.

There’s no health risks situation tents in Civic Center Park as City Hall is virtually closed. There’s no risk of jeopardizing city or state workers. Yet the city cares so little about protecting the health of Tenderloin families that preserving a grass landscape  is a higher priority.

Shifting the over 200 tents to Civic Center Park and other green areas would serve Kositsky’s concern that these “families” remain connected. And it would send a message that encampments on Tenderloin sidewalks are no more acceptable than in other neighborhoods—a message that  city policy denies every day.

I raised concerns about City Hall reversing its formerly positive policies toward the Tenderloin before the pandemic (See “After 40 years the Tenderloin at Another Crossroads,” SF Chronicle, February 23).  The coronavirus has expedited the city’s push to return the Tenderloin to the full-fledged containment zone of the past. Never before have city officials so blatantly sacrificed the health of Tenderloin lives in order to better protect affluent neighborhoods.

But that is exactly what’s happening.

The city is not simply refusing to enforce social distancing in the Tenderloin; it’s treating this failure like a positive social goal. As Kositsky told Phil Matier (whose reportage on the Tenderloin has been stellar), “We should not come to the Tenderloin and judge people — they are not out here enjoying a picnic, they are trying to survive.”

Yes, Jeff Kositsky, the families of the Tenderloin are trying to survive. And city policy is making it much harder. Your claim that subjecting people in the Tenderloin to the same social distancing rules as other neighborhoods is inappropriate “judging” is both false and condescending; it reflects an indifference toward protecting the health and safety of low-income people that has no place in San Francisco.

Randy Shaw explains how City Hall held back the Tenderloin’s progress for decades in The Tenderloin: Sex, Crime and Resistance in the Heart of San Francisco,