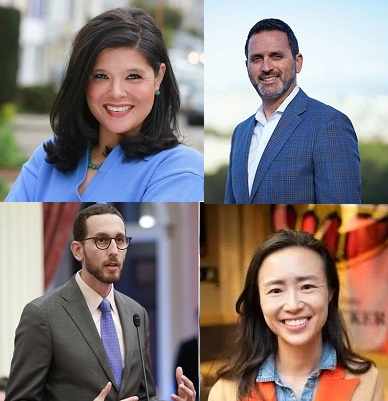 San Francisco Board of Supervisors

San Francisco has five Board races. Hillary Ronen is unopposed in D9.  And while Danny Sauter has run a spirited campaign against Aaron Peskin in D3, the incumbent should win easily. I willl address the more contested races.

Before getting to my picks, let’s examine the reduced value of slate card endorsements in the San Francisco races.

Historically, people took slate cards to guide their in-person voting. They were long, narrow and provided a full slate so that it would be the only piece of paper a voter needed. The traditional SF Democratic Party slate card has been particularly influential in highly-partisan presidential election cycles—like 2020.

I analyzed the D1 race in my September 14 story, “Will San Francisco’s D1 Vote for Change?” My article preceded the sendout of the SF Democratic Party slate card which could be mistaken for a Connie Chan mailer. “Progressive” activists have also been out in force for Chan.

D1 is between Chan and Marjan Philhour. David Lee has elevated his campaign in the past month. Lee won’t win but his second place votes could decide the election.

Last week, Chan urged Chinese-American voters to make her or Lee their top two choices. David Lee attacked Eric Mar’s progressive positions in their 2012 supervisor’s race and has always been opposed by the city’s “progressives.” Some voters may find Chan’s appeal patronizing. Chan’s support for a candidate way to her right politically confirms that her campaign see’s Lee’s second place votes as potentially deciding the race.

Most people I talked to see Chan winning. The feeling is that the self-identified “progressive” has won every district race since 2000 and that incumbent Sandy Fewer is doing everything she can to elect Chan.

I’m still going with Philhour. Her greater name recognition distinguishes the 2020 race from those won by McGoldrick, Mar and Fewer. I see Chan as a weaker candidate than her winning predecessors and Philhour has run a very strong campaign.

Dean Preston and Vallie Brown face off in a rematch of their November 2019 race that Preston won narrowly. Preston has never stopped campaigning and has been a high-profile Supervisor. In contrast, Brown dropped out of sight after losing and it was not certain she would seek a rematch.

Big donors now drive Brown’s campaign. Brown and an independent expenditure effort headed by the San Francisco Housing Action Coalition’s Todd David have together sent five hit pieces attacking Preston for his years working at the Tenderloin Housing Clinic, which I head (THC was a member of SFHAC at the time of these mailings which tells you all you need to know about Todd David’s character; we have since been removed from membership at my request).

Brown’s mailers reflect the type of projection we often see with Donald Trump. The idea is to attack your opponent for what you in fact are guilty. Brown likely lost in 2019 because of revelations that she had done an owner move-in eviction of  a Black D5 family. In contrast, as I describe in Generation Priced Out, while at THC Preston defended many tenants facing eviction. Among his most high profile cases was representing Grace Wells, an elderly Black tenant facing a very questionable owner move-in eviction from her longtime D5 home (Wells had lived in the neighborhood since 1942).

To address this sharp contrast between the candidates Brown and David’s “independent” effort have falsely claimed that Preston wrongfully evicted hundreds of tenants. Unlike Brown, Dean Preston has never evicted a tenant.

I wrote about this on September 8, “San Francisco’s D7 Has Another Tight Race.” The race remains tight, though I no longer see Emily Murase as a potential winner. Her second and third place votes, however, could decide the election.

Myrna Melgar was the top choice of the SF Democratic Party. Yet the party slate card has her picture next to Vilaska Nguyen as if they were equal endorsees. The caption identifies Melgar as the first choice but those just looking at the pictures amidst a stack high of political mailers may overlook this.

It seems clear that the progressive SF Democratic Party majority wants either Melgar or Nguyen to win. They do not want Joel Engardio. There are other moderate to conservative candidates in this race whose second place votes are likely to go to Engardio so Melgar and Nguyen need the other’s second place votes to win.

D7 is too close to call. I don’t expect the outcome to be decided until days after Nov. 3. If Melgar and Nguyen voters back each other as Jane Kim and Mark Leno backers did in the 2018 mayoral election, one of them will win. If many of their second place voters go elsewhere, Joel Engardio prevails.

Incumbent Ahsha Safai has the endorsement of the SF Labor Council, UNITE HERE Local 2 and a ton of other unions. He is also backed by Jane Kim and Aaron Peskin. If these unions and politicians believed John Avalos’ criticisms of Safai as aligned with the wealthy the incumbent would not have janitors and hotel workers supporting his campaign. The SF Democratic Party slate card for D11 is similar to that in D7; that says the city’s “progressives” are fine with Safai. I see him winning a close race.

Scott Wiener may be the Bay Area’s most polarizing politician. San Francisco “progressives” have despised Wiener since he briefly gave “moderates” control of the SF Democratic Party; his scorched earth campaign in 2016 to win the senate seat against Jane Kim intensified this progressive dislike.

I got into many tiffs with Wiener over condo conversions and Airbnb when he was a supervisor. But in 2020 “progressives” attack him for his challenges to exclusionary zoning and support for infill housing— positions true progressives should support.

The “progressive” camp’s extreme dislike for Wiener is why so much energy and money is going into Jackie Fielder’s campaign to defeat him. But Fielder has absolutely no chance to win. Here’s why.

Fielder is a 25-year old activist who launched her campaign with no political history in San Francisco. I doubt most city voters had ever heard of her. Fielder’s name recognition is even less in Daly City, Broadmoor, Colma and the part of South San Francisco that is also in the district.

A political unknown could win if faced off against an incumbent who had huge negatives and took re-election for granted. But nobody outworks Scott Wiener on the campaign trail. And Wiener’s popularity extends beyond housing advocates; he has strong support throughout much of San Francisco and will swamp Fielder outside the city.

If Jane Kim could not defeat Wiener, Fielder will not even come close. I suspect her candidacy was designed to build her support base and name recognition for a future supervisor run, and Fielder has accomplished that. So she “wins” regardless of the outcome of this election.

Check back with us on the days following Nov. 3 for updates on these races.