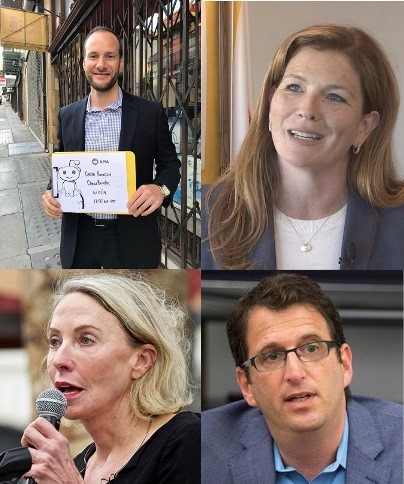 San Francisco’s November 2019 election is not what we expected. It was supposed to feature a high-turnout mayor’s race to succeed Ed Lee. But Lee’s untimely death shifted that signature mayoral match up to June 2018. Mayor Breed won that race and is now running unopposed. This leaves the District Attorney and District 5 Supervisor races to generate voter turnout, a task that became even more challenging as voters focus on President Trump’s impeachment and California’s fires.

So the standard election buzz is lacking but the outcomes still count. Here are my takes on the DA and D5 races and key initiatives.

San Francisco has not had a competitive District Attorney’s race since Kamala Harris beat Terrence Hallinan in 2003. Former DA George Gascon won two terms despite alienating all sides of the city’s political spectrum. The DA’s race has never been a contest that drives San Francisco voters to the polls.

But this year may be different. Four candidates have waged serious campaigns. Nancy Tung and Leif Dautch have run serious, issue-driven campaigns but neither has a chance to win. The next DA will be either Chesa Boudin or Suzy Loftus, the latter of whom was recently appointed to serve as District Attorney.

Much has been written about Loftus’ appointment. I think its impact on the outcome of this race has been vastly overstated. In fact, I would doubt that even 25% of the electorate could name SF’s current DA. People have been focused on Trump and fires, not the San Francisco District Attorney’s race.

Boudin has run a great campaign. He has gone from a virtual unknown—I had never heard of him until he announced his candidacy—to inspiring local volunteers and donors from across the country. He has situated himself within the national movement for a more progressive approach to criminal justice, which brought victory in the DA’s race in Philadelphia and nearly did so in Queens, NYC.

Boudin also represents the rising political power of the San Francisco Public Defender’s Office. This began with Jeff Adachi and increased with the elections of District 9 Supervisor Hillary Ronen (her husband is a top public defender) and D6 Supervisor Matt Haney (who worked in criminal justice prior to his election). The Public Defender’s office now aspires to take over leadership of its chief rival, the District Attorney’s office.

Chesa Boudin’s campaign will unquestionably bring low-frequency voters to the polls. But despite the recent poll that had him in the lead—was the San Francisco Chronicle trying to boost interest in the race by publishing a poll taken by Boudin’s own campaign?—I see him facing an uphill path to victory. Boudin essentially has to get more votes than the other three candidates combined.

In 2018 London Breed defeated the nearly combined votes of Mark Leno and Jane Kim (over 2/3 of Kim second place votes went to Leno). Loftus should get most of Tung and Dautch’s second place votes despite neither of these candidates openly urging their supporters to make Loftus their second choice as Leno and Kim did for each other. Even if Loftus gets only 25% of the second place Tung and Dautch voters it still requires Boudin to pretty much overcome all of his competitors combined.

That will be tough. I see Loftus winning big in the high-turnout districts 2, 4, and 7. She will exceed his totals (accounting for ranked choice votes) in districts 1, 3, 8, 11 and possibly 10. Loftus’ electoral map parallels that of London Breed’s successful 2018 campaign.

Boudin’s best case scenario is to win districts 5, 6 and 9 by colossal margins. But progressive Jane Kim was unable to do this in 2018. I doubt Boudin will match Mark Leno’s success in D8, and the D8 Supervisor Rafael Mandelman endorsed Loftus.

A Boudin victory requires a very low turnout race where the electorate is disproportionately extremely progressive voters. It also requires that a low percentage of Tung and Dautch voters make Loftus their second choice.

Both are possible, which is why nobody should count Boudin out. Boudin also has the clear political identity that Loftus may lack. When Loftus announced her candidacy in March 2018 I wrote that she had an excellent chance to defeat incumbent DA George Gascon. But Gascon’s decision not to run left Loftus  running as the progressive choice against Tung and Dautch. Boudin’s success then led her to return to her original message of being the tough, experienced and fair prosecutor San Francisco needs. With so much voter focus on Trump and fires, Loftus’ political identity might not as clear as it should be on Election Day.

My September 2 story on the D5 race (“D5 Race Takes a Surprising Turn”) was written after Brown won three endorsements that I saw as confirming her progressive status: the San Francisco Democratic Party,  SEIU 1021 and NUHW all made Brown their sole endorsement.

I’ve asked more people about this race than any prior contest over the last fifteen years. And nobody is clear on how it will turn out.

The source of the complexity starts with the candidates themselves.

I worked with Preston for years at the Tenderloin Housing Clinic. His stellar legal representation of tenants is highlighted in my book, Generation Priced Out. I was a big supporter of Dean’s plans to form Tenants Together and never got the impression he was interested in running for office.

Preston performed much better than projected in his 2016 race against London Breed. True, Breed did not run an all-out campaign.  But bottom line, Preston only lost by roughly 4%.

Preston’s 2016 race led me to see him as the early favorite in 2020, which would have been for an open seat had Breed not become mayor.  Vallie Brown is likely the only appointee Mayor Breed could have selected who could defeat Preston.

Brown’s big edge is her long history serving D5 as a supervisor’s aide. She also has one of the most likeable personalities to be found in politics.

Brown also has the overwhelming support of D5’s African-American electorate. Their level of turnout may be the single biggest factor determining if she wins.

Until three weeks ago, Brown’s campaign was sailing along. Victory was not assured but she was running a very strong campaign. Preston’s camp then released a story about Brown evicting tenants in 1994. It’s said that the Preston campaign had this information for some time and was just waiting for the best time to break the story, which was soon after absentee voting began. I’m not sure about that. Preston may regret not breaking this story months before Brown’s positive image was solidified. Now the news may have far less impact, particularly since it occurred 25 years ago.

Many facts about the eviction remain garbled, forgotten, unexplained or simply unknown. It seems clear that Brown and her associates purchased and planned to occupy a building that was housing tenants.  Some voters will not support a candidate who conducted or planned an owner-move in eviction. It’s not clear how many of these D5 voters were already backing Preston.

Preston got 48% in 2016. That’s a great base. He won’t keep all his former voters— Brown has deeper roots in the community than Breed had in 2016 and has run a far more aggressive door to door campaign—but will keep most.

It all comes down to how much of Preston’s 48% declines with the reduced 2019 turnout. The Trump scandals are dominating people’s political space. And while the Preston-Brown contest excites insiders, those worrying about the fate of the nation may not care about voting in this race.

Brown’s advantage is that she does well among the older residents who always vote. She also has a huge edge in the African-American community.

I offer predictions, not guesses. Turnout is simply too uncertain for me to predict a D5 winner. I will predict this: the race will be decided by the level of turnout among African-Americans and tenant voters under 35. Brown cannot win without a strong turnout among the former; Preston requires at least a decent turnout among the latter.

This 2019 race is a special election. The winner must face voters again in 2020. So even should Preston lose he might give it another chance with the high turnout election next year. In contrast, a Brown defeat would almost certainly end her political career.

The only heavily funded San Francisco initiative—the ill-conceived Prop C—was abandoned by Juul and is headed for defeat. Prop C is the only measure where the “No” side will win. Everyone tells me that Prop A, the $600 million affordable housing bond, will definitely win. I had a little concern over the low voter turnout but  Mayor Lee’s 2015 housing bond got over 70% with a lower turnout than we are likely to have next week.

San Francisco has another election is in March. And with the competitive Democratic Presidential primary, the city’s voter turnout for that election cycle will be huge.

Randy Shaw is Editor of Beyond Chron and has followed San Francisco politics for over forty years. His most recent book is Generation Priced Out: Who Gets to Live in the New Urban America