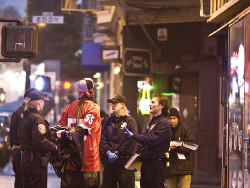 San Franciscans will be pleased to note that, according to Crime Mapping, the software which the San Francisco Police Department uses to allow citizens to check up on localized crime data, not a single person was arrested on a drugs/narcotics-related offense in the first five months of this year. At last, San Francisco is completely drug-free. Of course, that isn’t true. Not only is San Francisco not drug-free, but some parts of the city, most notably in the Mission and the Tenderloin, are getting steadily worse when it comes to drug traffic. But while CompStat reports for each of the SFPD Districts and for the city as a whole show numbers for narcotics offenses, the search results on Crime Mapping, upon which residents rely for more specific and immediate information about their blocks and neighborhoods, don’t show a single drug arrest. This, despite a page on the website which promises that searchable offenses include “homicide, forcible rape, robbery, aggravated assault, arson, burglary, larceny (theft), vehicle theft, vandalism, and drug offenses.”

According to the computer, there were 46 drugs/narcotics arrests in Dallas during the first five months of the year. Although they were scattered widely throughout the city, the highest concentration of them appeared in the Knox-Henderson neighborhood, which is located near the campus of Southern Methodist University and is home to a lively bar and restaurant scene. In Detroit, there were 680 drugs/narcotics arrests, and although the computer gives the impression that they blanketed the city, the worst cluster was located in the Upper East part of the city, particularly Regent Park and Mohican Regent. In Oakland, there were about 750 arrests, clustered along the San Leandro border, up and down East 14th St. and International Boulevard, near the Coliseum, and in West Oakland.

This is the kind of information that the Omega Group’s Crime Mapping service is supposed to provide residents of a city. The Omega Group contracts with 237 law enforcement agencies to serve as an easy, accessible way of presenting mapped crime statistics to the people who most need to know about them.

The San Francisco Police Department is one of those 237 agencies. In a city whose makeup is constantly shifting, a city whose inhabitants are always on the move, it’s important to know where—and what types of—crimes are occurring. As most San Franciscans know, the city has a bit of a homelessness issue on its hands, and issue that all too commonly goes hand-in-hand with drugs. Because drugs and narcotics are not only linked with homelessness, but also with many other types of crime, knowing where drugs/narcotics crime is concentrated can help a person make more informed and safe decisions about where to live, where to work, and where to be on guard.

I uncovered this glitch while researching Tenderloin crime data. In an effort to figure out where all the narcotics arrests were on Crime Mapping, the net was accidentally cast just wide enough to fish out a drugs/narcotics violation from across the Bay. Someone got arrested for possession on Goss St. between Wood and Pine at 5:45 pm on May 18. The computer knew about it. So why didn’t it know about the drug trade at 16th & Mission, or on Turk between Mason and Taylor?

According to Vance Stewart, the Operations Manager for the Omega Group, “Each police agency decides which crime types are to be posted…Some agencies choose to limit the types of crimes based on internal criteria.” Among those criteria are crimes in which the victim’s personal privacy should be protected (not applicable here) and crimes not having been “deemed worth reporting.”

SFPD’s webmaster, Wilson Ng, insisted that the error was not the result of such a decision. According to Ng, the department switched away from an older, different mapping software called CrimeMAPS. “The drug arrests would have shown up on the older system because of the way that incidents were reported,” Ng explained. However, SFPD was receiving too many complaints of technical glitches, computer errors, and other frustrating end-user issues, so they moved to switch over to Crime Mapping.

The issue with narcotics arrests showing up in San Francisco on Crime Mapping is that, according to Ng, “There are two versions of the Crime Mapping system here. There’s an internal one, which we use, and there’s an external one, which is what’s available to the public.” The internal system is based on a complex, sophisticated analysis and breakdown of incident reports, and is used by police officials to compile their CompStat reports. “I wish I could show it to you,” Ng said.

The external system, however, is based solely on calls for service. Whatever the category of a call for service is, that’s how the offense shows up on the external Crime Mapping results.

Why does this impact drugs/narcotics reporting? Aside from the fact that many durgs/narcotics arrests do not arise from calls for service, and would therefore not necessarily be entered in the system anyway, those drugs/narcotics arrests that do come from calls for service apparently go under the category of “Suspicious Person.” But Suspicious Person reports don’t show up on San Francisco’s Crime Mapping results either. Ng was unable to determine why they did not appear.

Ng did say that the department has been working on upgrading the reporting system used for the external Crime Mapping results, trying to create an efficient system that doesn’t rely solely on calls for service. He said that the upgrade was scheduled for completion sometime in September or October, and that when it was completed, the external system’s results would mirror those of the internal system.

In the meantime, Ng advises concerned citizens to contact their local police stations to get more accurate and detailed reports of crime in their area. He also said he would remove the reference to citizens’ being able to search for drug offenses from the website, although this has not yet been done as of June 22.

When a city — even this city — tells citizens that it’s going to offer them a service, there is a certain expectation that the service will be delivered. And if it can’t be delivered, or if it has to be modified from its original form, the citizens ought to be among the first to know.

The City has failed so far in that obligation, promising citizens a complete picture of crime but subtly omitting an important subset of information, either intentionally or unintentionally lulling citizens into believing that crime in their neighborhoods is less severe than it truly is. It’s time for the City to correct this failure.