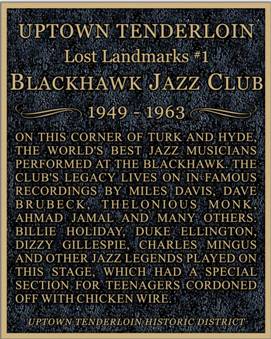 Thanks to San Francisco’s Neighborhood Arts Collaborative Program, the history of such “lost landmarks” as the Blackhawk Jazz Club, Compton’s Cafeteria, and the California Labor School will be revived through sidewalk plaques in the Uptown Tenderloin National Historic District. Similar to the plaques comprising the Barbary Coast Trail, the project will provide details of transformed existing buildings as well as places like the former Arcadia Dance Pavillion (later the Downtown Bowl), which is now Boedekker Park. Other landmarks include the city’s first B’nai Brith at 149 Eddy and Sally Rand’s Music Box, now Great American Music Hall.

While San Francisco’s Uptown Tenderloin has undergone remarkably few changes to its historic architecture, some buildings and uses which played important roles in local and even the nation’s history are now gone. San Francisco’s Neighborhood Arts Collaborative has provided funding to create sidewalk plaques for nine of these landmarks, creating a walking trail that will further highlight the neighborhood’s historic character.

It was not until Susan Stryker’s critically-acclaimed 2005 film, Screaming Queens, that most San Franciscans, and the rest of the world, learned that San Francisco’s gay and lesbian rights movement was galvanized by the transgender community’s resistance to police attacks at the Compton Cafeteria in the Uptown Tenderloin. The Compton “riots” in 1966 preceded Stonewall by three years, but until Stryker reclaimed this history, it was largely forgotten.

The Compton Cafeteria is long gone, and all that has been left at its former Turk and Taylor site to commemorate this historic event is a small sidewalk inscription. Soon, the site will have a 20”h by 16”w plaque describing the riot and the historic events that occurred on this site.

The California Labor School occupied 240 Golden Gate from 1947-51, and is now home to SEIU Local 87. The California Labor School’s enormous contributions to the city’s political and artistic life have been largely erased from history because of its alleged connections to the Communist Party; in fact, government harassment of the school over its political leanings eventually resulted in its having to close.

The School featured artists like Anton Refregier and taught classes to Maya Angelou and many more, and was the citadel for those producing socially conscious art. A sidewalk plaque will soon revive the memory of this lost landmark.

A more recent “lost landmark” is the Screening Room at 220 Jones. Currently the Power Exchange, the Screening Room was the first movie theater in the United States to show adult films, premiering in 1968 with Alex De Renzy’s “Pornography in Denmark: A New Approach.” Time magazine wrote in 1970 that De Renzy “bestowed the coup de grace to movies last remaining sexual inhibitions,” and the film brought long lines of well-dressed customers to the neighborhood

From 1949-1963, the Blackhawk Jazz Club was at the northeast corner of Turk and Hyde. Many of the world’s best jazz musicians performed at the Blackhawk, whose legacy lives on in famous recordings by Miles Davis, Dave Brubeck, Thelonious Monk, Ahmad Jamal and many others. Billie Holiday, Duke Ellington, Dizzy Gillespie, Charles Mingus and other jazz legends played on this stage, which had a special section for teenagers cordoned off with chicken wire.

The building that housed the Blackhawk was demolished in 1970, and the site has remained a parking lot. The sidewalk plague will be the first commemoration of the Blackhawk at its former site.

Wally Heider Recording (1969-73) at 245 Hyde is still a recording studio, and its current ownership and management operates as Hyde Street Studios, an acclaimed facility in its own right. From 1969-73, Wally Heider Recording on this site was preeminent in the Bay Area if not the nation, with the Grateful Dead recording “American Beauty” and Crosby, Stills, Nash and Young, Jefferson Airplane, and Creedence Clearwater Revival all turning out huge hits recorded here.

Few walking on Hyde between Turk and Eddy have any idea of the music history created there. The Sidewalk Plaque Project will change this.

Installing sidewalk plaques to recover the Uptown Tenderloin’s lost landmarks is part of a broader effort to reclaim the neighborhood’s lost history.

Last March, Mayor Newsom spoke at a ceremony unveiling the installation of historic plaques on 73 neighborhood buildings. Plaques have since been installed on an additional 25 buildings, bringing the total to nearly 25% of the over 400 historic structures in the National Historic District.

In November, a walking map of the historic Geary and O’Farrell corridor of the Uptown Tenderloin was published. The map highlights both the buildings and the bars and restaurants in the area, whose popularity continues to grow.

Precita Eyes will soon begin a long-sought restoration project of historic advertisements on two buildings on Taylor Street between Turk and Eddy. Funded by the San Francisco Community Challenge Grant Program, the project restores a visually stunning historic mural for the Telegraph Railway Schools, which features a train illustration on the building adjacent to the former Original Joes.

The project also includes a large restoration of a PAR-T-PACK Beverage Ad, as well as a rectangular ad for Original Joes (which should encourage customers to visit its future North Beach location).

The Uptown Tenderloin’s historic past was ignored from the start of the neighborhood’s decline in the 1960’s until recent years. But it is steadily being recovered for all who walk through the neighborhood to enjoy.

Randy Shaw is the Editor of Beyond Chron, and is on the Board of Uptown Tenderloin, Inc, which will implement the Sidewalk Plaque Project.