San Francisco and the Biodiesel Revolution 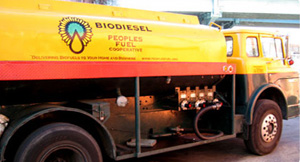 Through the efforts of the SF Department of the Environment, virtually all of San Francisco’s diesel fleet will be running on B20 biodiesel by year’s end, including MUNI, the SF Zoo, Airport Shuttles and elements of the Fire Department. The Public Utilities Commission’s “greasecycle” program of collecting restaurant grease and converting it into biodiesel, (and its glycerine by-product ultimately turned into soap), is off to a flying start. SF may perhaps be the largest city in America to use the veggie-oil based fuel to reduce some of it’s greenhouse gas emissions and deal with it’s waste in such a sustainable way.

In addition to the city’s efforts with converting their fleet to biodiesel, the Dept. of the Environment recently funded several programs to promote the use of biodiesel; specifically in Bayview Hunters Point and Potrero. SF Petroleum, holders of the city’s master fuel contract, has also recently made B100 biodiesel available to the the city, fleets and now SF residents via the San Francisco Biofuels Cooperative; and Rainbow Grocery has begun “after hours” fueling of biodiesel at their loading dock. This recent movement toward using biodiesel in San Francisco is a far cry from it’s earlier days in 2004.

Made from vegetable oil, biodiesel owes it’s name to Rudolph Diesel, inventor of the diesel engine. Diesel’s engines were originally designed to run on veggie oil and only after his untimely (and some say mysterious), death, were his engines re-designed to run on the petroleum based diesel we see today. With the advent of the oil crisis of the 1970’s, Diesel’s work was improved upon in a search for alternative fuel sources, and the modern day biodiesel movement was born. Biodiesel produces far less greenhouse gas emissions than petroleum diesel and it’s exhaust smells akin to french fries!

Much of San Francisco’s current biodiesel movement can be traced back to 2004, to the early days of the SF Biofuels Cooperative, a fledgling group of grass roots enthusiasts, scientists and generally green-thinking folks. Through their efforts, they convinced a previous owner of the Olympian station at 23rd and Third, to offer the first B100 biodiesel pump. For nearly a year the group fueled their cars in Potrero, until ultimately the station was sold, and their biodiesel supply seemingly came to an end.

Fortuitously, five women, including Melissa Hardy and Jennifer Radke of the women’s owned and operated “Biofuel Oasis” opened around that same time in Berkeley and the Bay area’s longest running biodiesel pump born. With classes on changing fuel filters; workshops on making “lavender” biodiesel, and fueling 7 day days a week, the Oasis has become a role model for the DIY biodiesel seller and user, and even frequented by the likes of Willie Nelson, Peter Coyote and the U.K.’s BBC.

As the SF biodiesel community continued to search for more alternative fuel sources, the city’s first biodiesel tour bus company, Incredible Adventures, (run by the SFBC’s Jolie Ginsberg), emerged to offer a new home to the biodiesel starved SFBC, organizing “Biodiesel 101” classes and some occasional fuel for the SFBC and it’s members. With bus tours to Yosemite, Lake Tahoe, Las Vegas and even supplying shuttle service during a few Green Festivals, Incredible Adventures had become a green, biodiesel ambassador to visitors and locals alike.

With the success of Kevin Danaher’s Global Exchange, the SF Green Festival and Mayor Newsom’s alternative fuel mandates, the time seemed right for San Francisco to take the lead in the growing biodiesel movement. Years earlier, the city of Berkeley had been the first to use biodiesel in it’s vehicles and learned the hard way, that like real estate’s famous mantra of “location, location, location”, in the biodiesel world it’s “quality, quality, quality”, and in their understandable zeal to embrace this new fuel, they got a “bad batch” which sadly killed two new truck engines.

The city of San Francisco also faced a dilemma as well; a recent batch of natural gas MUNI buses couldn’t adequately climb the hills of Bayview and Portrero, leaving it with only one viable alternative: diesel. Fortunately for them, folks like MUNI’s Marty Mellera and others were biodiesel advocates and suddenly the idea of MUNI using hybid-electric diesel buses sprang to life. What better way to mitigate the effects of diesel than to use not only hybrid-electric buses, but to also run them on biodiesel just as cities in Europe and recently, New York City had done?

Not wanting to repeat the misfortunes of Berkeley, San Francisco enlisted the aid of the SFBC’s founding members, it’s president Eric Bowen, Ben Jordan of Peoples Fuel, and CytoCulture’s Professor Randall von Wedel, among others. The SFBC stressed the need for quality, sustainability and availability. With most of California’s biodiesel arriving from the Mid-west and Texas at times as much as .25 a gallon more, the desire for sustainable, local alternatives became an obstacle to be overcome.

Jordan, an engineer and long time bio-fuel advocate, had made a living on being sustainable, having worked on biodiesel in Guatemala and Nepal. His concept of “biofuel recycling” and waste regeneration was a novel one; one that Susan Leal and the PUC has amazingly brought to life with the will of some very forward thinking folks. Jordan’s “Biofuel Recycling Cooperative” hopes to export that approach other municipalities, in what can only be a positive step in mitigating waste and pollution.

Today, members of the SFBC, the Biofuel Oasis and Peoples Fuel Cooperative, continue to work with the city, Mayor Newsom, Supervisor Jake McGoldrick, the SF Dept. of the Environment, the PUC, Dept. of Health and others to craft guidelines and policies governing the use of biodiesel via the Biodiesel Access Task Force. San Francisco is creating a blueprint for working with city government, residents, grass roots activists, and advocates alike, and with the success of these programs, one can only hope there will be more replicated throughout California and perhaps the country.

If I have learned anything, it’s that there is no “magic bullet” in the world of alternative fuels; not biodiesel; not ethanol; not electric; not hydrogen. None of these fuels alone will replace our dependance on oil. Together, all of them may yet contribute to the design of a true “flex” fuel vehicle that can run on them all. In the meantime, each of these emerging technologies will surely aid in the fight against global warming, toxic air and foster a healthier, cleaner environment.

E. “Doc” Smith is the inventor of the musical instrument, the “Drummstick“, and the program director for Green Depot, a non-profit organization funded by an SF Environment environmental justice program, advocating the use of biodiesel in Bayview Hunters Point and Potrero. He can be reached at esmith@greendepot.org