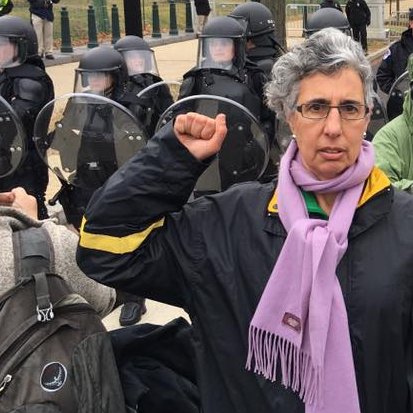 When Karen Topakian was studying filmmaking at the University of Rhode Island and getting arrested at a New York City demonstration against nuclear proliferation in 1982, she had no idea it would lead to a lifetime of arrests for nonviolent civil disobedience, culminating in a protest on a crane near the White House. Topakian, now the board chair of Greenpeace, Inc., is the subject of a new short documentary, “Arrested (Again)”, which debuts at the San Francisco Green Film Festival on Sunday, April 23, 2017.

“My first foray into activism started in 1977 when my public interest lawyer roommate asked me to testify before the Rhode Island Public Utilities Commission about lowering residential rates during off-peak hours,” says Topakian. “Shortly after that I became a community organizer and haven’t stopped organizing since.”

In Washington, D.C. on January 25, 2017, Topakian and six other Greenpeace activists scaled a crane at a construction site near the White House to unfurl a 70-foot-long banner emblazoned with the word, “RESIST.”

“The protest itself and the simple message, ‘Resist,’ resonated with thousands of people in this country and around the world who need support and hope in the struggle for peace and justice,” says Topakian. This protest took place after “Arrested (Again)” was filmed.

The activist, who is 62 and lives in San Francisco with her female spouse, believes that nonviolence plays a key role in these direct actions. “I approach acts of civil disobedience with a strong commitment to do no harm to property or to people,” she says, “though I understand the anger felt by those who want to destroy the power structure that property can represent.”

She’s taking a break from being arrested for the time being, however. As a condition of her Deferred Sentencing Agreement in the Washington, DC, banner case, Topakian is prohibited from further arrests, for any cause, until after September 1, 2017.

After completing her film studies in Rhode Island, Topakian moved west to study film as a graduate student at the San Francisco Art Institute. After graduating in 1987 – and ahead of the IRS, which had caught up with the tax-resister and threatened to garnish her wages – she became a nuclear disarmament campaigner for Greenpeace in San Francisco. That was followed by 16 years as the Executive Director of the Agape Foundation Fund for Nonviolent Social Change, which awarded grants, loans, and fiscal sponsorship to California-based grassroots nonviolent social change organizations. In 2010, she became chair of the board of Greenpeace, Inc., and she now runs Topakian Communications, a freelance writing and communications consulting business that works primarily with advocacy organizations.

Along the way, Topakian’s commitment to activism never wavered. She’s regularly arrested at Hiroshima and Nagasaki Day protests at Lawrence Livermore National Laboratory and was arrested in October 2016 at Citibank’s San Francisco headquarters for protesting the bank’s financing of the Dakota Access Pipeline. She has protested the launching and commissioning of Trident submarines in Connecticut, blocked railroad tracks in Antioch, California, where DuPont produced now-banned ozone depleting chlorofluorocarbons (CFCs), and was once arrested in San Francisco for simply being in the vicinity of a protest against Henry Kissinger.

“Taking risks every year is part of the credential of being an activist,” Topakian says, “and with the new president, I’m concerned that if I don’t exercise my First Amendment right, he might try to take it away from us.”