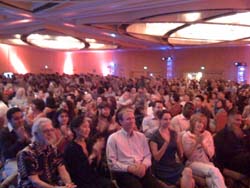 Barack Obama’s speech was much like his candidacy has been. The audience saw in it what they wanted to. And they loved it. At Roe Restaurant in San Francisco, progressives cheered lines that acknowledged support for paid sick leave — a policy pioneered in San Francisco, passing with 61 percent of the vote two years ago. MSNBC had to cut off constant Obama critic Pat Buchanan, because he was gushing about the speech for too long. He said that the speech “wasn’t liberal, it was centrist.” Markos Moulitsas of Daily Kos said the speech came from the “democratic wing of the Democratic Party” and was “a full-throated defense of progressive principles, devoid of mushy centrist crap.”

There was an anger not seen recently in Obama speeches. And he was able to frame that anger not as that of an unhinged extremist, but of someone too patriotic to stay silent any longer. “America, we are better than these last eight years,” he said. “We are a better country than this.”

It was a more scathing attack on the Republican record than anything Vice Presidential nominee Joe Biden could muster yesterday evening, as Obama told Republicans to “own their failures.” The stark word “enough” echoing across Denver’s Invesco Field, the crowd stunned silent, before they were able to react with applause.

“He was really detailed on the policy this time,” said Kate Noerr, who watched the speech at an Eric Mar fundraiser at Roe Restaurant. “This is one of the greatest political speeches I’ve ever seen, and I was on the Mall in Washington 45 years ago.” Obama never named Dr. Martin Luther King directly in his speech, but alluded to him as “the preacher” several times.

Obama returned to the theme of the 2004 DNC keynote speech that helped rocket him to political fame, that there is no difference between red America and blue America when everyone is united by their love of country. This time he framed it around soldiers who have fought and died “under the same proud flag.”

“It’s hard for me to react right now and say something,” said District Nine Supervisor candidate Mark Sanchez. “I was crying if that tells you anything. I guess I’m like Michelle Obama. I feel proud of my country.”

“To be a Latino supporter of Obama’s, to see what this means for us too,” said Sunny Angulo, Sanchez’s campaign manager. “It’s really a new vision for America.”

“It’s amazing that someone on the national level is even considering it,” said Byrne. Mehta believes that the success of paid sick leave in the city proves it can work everywhere. “A lot of people made this happen on the local level,” said Mehta. “And now it’s come up on the national level in this speech. Young Workers United led that change.”

Obama did everything that has been asked of him. He attacked, sharply. He focused on the economy first, and played up Phil Gramm’s infamous “nation of whiners” quote. He was detailed and hit hard. The grandiose uplifting prose of past speeches wasn’t entirely missing, but wasn’t the focus. He came as close as ever to telling the public that his tax cuts for the middle class are larger than that of McCain’s.

After this week in Denver, Obama should have solidified the Democratic base and McCain will have to focus his attention on Independents. With President George W. Bush speaking at the convention on Monday, we will see if he can accomplish this in St. Paul next week.