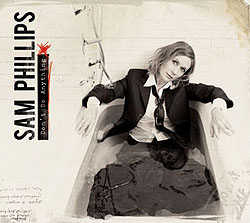 My first exposure to the singer Sam Phillips came during tie mid-nineties, while touring on the summer folky-circuit. Her album “Cruel Inventions” quickly became one of my all-time-favorites, and my band mates and I played it to death. Songs like, “Tripping Over Gravity”, “Standing Still”, and the killer “Raised on Promises” were simply unbelievable. No small wonder, Phillips was joined on the album by future husband T Bone Burnett and Elvis Costello. It remains one of my favorite albums of all time and I play it regularly. Now Phillips makes a rare San Francisco a appearance this Saturday night at Yoshi’s in support of her latest album, “Don’t Do Anything”. Oh you do not want to miss this one.

Phillips was born in Glendale, California, and began her musical career as a vocalist in the early 1980s, singing background parts for Christian artists Mark Heard, Randy Stonehill and others. After a short time, Phillips was signed to a solo contract with Myrrh Records – under her given name – where she went on to record four Christian pop albums, Beyond Saturday Night, Dancing with Danger, Black and White in a Grey World and, finally, The Turning, which teamed her with producer and future husband, T-Bone Burnett. Throughout the Myrrh period, Phillips wrote more and more of her own songs and several were Top 10 singles on Christian radio.

Since Cyndi Lauper was popular at the time and also had an high-pitched, idiosyncratic vocal style, Myrrh insisted on promoting her as “the Christian Cyndi Lauper.” Phillips was never comfortable with this image, and it became a bone of contention between her and the label. She began using the name “Sam” professionally in 1988 when she left Myrrh Records and signed with Virgin Records, partially in order to distance herself from her somewhat embarrassing Myrrh-imposed persona.

Like many Christian artists before her, Phillips expanded into more secular content at the new label. She released “The Indescribable Wow”, which featured the orchestrations of Brian Wilson lyricist Van Dyke Parks. The aforementioned “Cruel Inventions”, which was released in 1991, included a guest appearance from close friend Elvis Costello, and she (with her husband) supported Costello on his 1991 tour. 1994’s “Martinis and Bikinis”, was widely praised by music critics and was even nominated for a Grammy Award; this was Phillips’ first nomination. That year also gave Phillips a chance to write a song with Brian Wilson which would appear on Rob Wasserman’s Trios album, performed by Carnie Wilson.

In 1995, Phillips made her silver screen debut in the Bruce Willis blockbuster “Die Hard With a Vengeance”, in which she played a mute terrorist. She was originally supposed to have a speaking part in the film but it was decided that her character would be silent, since it made her appear much more imposing and lethal, although it also placed her in a more stereotypically femme fatale role at the same time. In 1996, Phillips released “Omnipop (It’s Only A Flesh Wound Lambchop)”, which featured a song cowritten by Phillips and R.E.M.. Omnipop, which was more experimental musically, ended up being her worst-selling album to date. After releasing a contractual obligation “best-of” album for Virgin in 1999, the label sadly dropped Phillips from their roster.

In 2001, Phillips signed with Nonesuch Records and released a stripped-down acoustic album called “Fan Dance”, which featured some of the most critically acclaimed songwriting of Phillips’s career. Van Dyke Parks contributed string arrangements for a track or two. Phillips also began writing music for and scoring the television series “Gilmore Girls”, and even appeared on screen during the final episode of season six, performing “Taking Pictures” from the Fan Dance album. In 2004, she released “A Boot and a Shoe”, another collection of acoustic cabaret songs in the same vein as Fan Dance. After the release of A Boot and a Shoe, news spread that Phillips and husband/producer T-Bone Burnett had divorced, although they continued to work together to finish the album.

Phillips’s latest album, “Don’t Do Anything”, was released last June and produced by Phillips. It is her first self-produced album and her first post-Myrrh album not to feature Burnett on any instruments, although he is credited in the thank-you section of the album credits.

Phillips is a truly amazing performer and there is really no one quite like her. Watching her with my chums in “Die Hard With a Vengeance” and listening to “Cruel Intentions” for the billionth time are the kinds of memories that will stay with me forever. Once you hear her, she’ll be with you forever too.