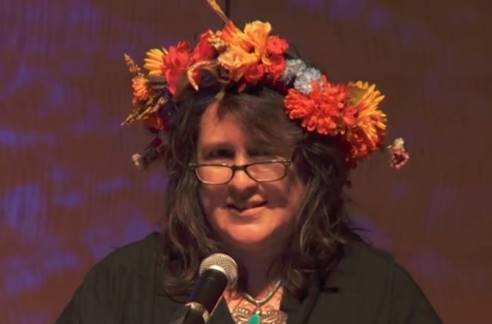 In 2020, when Kim Shuck was selected the San Francisco Poet Laureate, the San Francisco Public Library wanted to publish a poem of hers every day during her tenure. Shuck proposed they use the library’s website instead to give voice to lesser-known Bay Area poets. Calls to former poet laureates and poetry instructors brought in thousands of poems. To date, more than a hundred poems have appeared on the library’s Poem of the Day page, including poems by each of the three poets in this article.

We’re featuring three poems here – two of them appeared on the library page – that focused on aging. Each uniquely expresses the preciousness of life and our place in the world. Or, as Paul Corman-Robert, the facilitator of the library’s Older Writers’ Lab and one of the many people who helped with this article expressed it, “our growing sense of appreciation, knowing as we do that it could have turned out much worse.”

She entered her first LitQuake class only to discover they were writing poetry, which she “hated.” She wanted to leave; she had an unfinished novel to complete. “But I was too polite to get up and go.” She stuck with it and now considers herself a poet. Not only is her novel unfinished, she hasn’t looked at it in a year. And she’s been a member of OWL for the past five years. Poetry, she said, “is more compelling and it’s easier to write.”

Cooper was born in Savannah, Ga., the older of two children. At 18, she left home to attend Mercer University in Macon. After receiving her degree, she moved to Bloomington, Ind., to study Spanish literature. “I thought I would be more marketable if I spoke and wrote in Spanish.” After receiving a master’s in Hispanic Literature (as it was called in those days) and stuffing her belongings in a cardboard box, she boarded a Greyhound to California.

Jobs were difficult to come by in 1983. When she was turned down even for a phone solicitor’s position, she realized her best hope for work was through a temp agency. But she soon learned she hated secretarial work. “I would have continued, but the 1989 earthquake altered my plans. Life was too short to plug away at jobs I didn’t enjoy.” For the next 25 years, until her retirement in 2014, Cooper cobbled together a living as a teacher at a childcare center, an after-school program and the San Francisco Unified School District.

Now that she’s retired, she’s had time to attend OWL meetings and writing classes hosted by the San Francisco Community Living Campaign, and to concentrate on her poetry. “These activities have become my life. They mean so much to me with this pandemic.”

Her poem “Fire” is about confronting the issues of mortality and faith. “When you’re a child, you feel other people will protect you; as an adult, you think you can seize control. Old age is the time to … look for the true light and to come to grips with a lot of things.” Like the imminence of death and the reality that she won’t write the many novels she once thought she would. Her ambitions have become more of “an inner thing.”

Then again, old age is also a magical time, in some ways it’s like “being a child again,” she said. Pre-Covid, she joined some drumming circles. Then there’s the magic of daily life: her neighbor calls every day to check on her; her poetry teacher helped her set up her computer; a writing instructor checks in periodically. “People are just showing incredible kindness.”

While Cooper walked away from organized Christianity long ago, she’s begun looking for the “spiritual icons, the great mother” within herself. “The spirt and comfort beyond the human can be alive in my consciousness,” and expressed through her poetry.

When young and suffering with
manifold unfulfilled desires,
ideas, even cliches sustained her.
Oxygen of faith–
Life gets better.
All must change.
This too shall pass.

In old age, she entered
a time of stillness.
Not so many hours left
for breathing.  Improvement.  Passages.
Only the heart remained.

And although it had burned
too frequently too hot
with flailing need,
in her eightieth year, she began
to watch over passion
with growing clear-eyed contemplation
of what still kindled in her chest,
sometimes matured sweet warmth, and still
on many occasions, a bonfire
of craving time.
More love and time.

Every day, she was learning now
a certain reverence,
like what would be brought forth
for the strong spirit within a child,
just beginning to search
for truest light.

This Minnesota native has always been creative: art, theater, dance, writing – she explored them all.  After graduating from the College of St. Catherine in Minneapolis, she became a Vista volunteer and assigned to a job in Baltimore, Md., after training in New York City. She had always hoped to pursue theater in New York, but while she found the City “cool, it was too big and grinding to think about really living there.” When some of her Vista friends moved to San Francisco, she joined them.

Her high school and college theater experience came in handy when she was hired to direct a play about scams on seniors for the San Francisco District Attorney’s Consumer Fraud Unit “The cast was all seniors, mostly non-actors.” Though she describes the experience as “like herding cats,” the play was successfully performed at senior centers around the city.

Marriage and children temporarily slowed her down, but she still found time to attend classes at San Francisco State University. In 1974, she received a master’s degree in creative arts.

She worked as a creative arts teacher at the Edgewood Children’s Center and creative arts therapist at St. Luke’s Hospital, followed by a stint as volunteer coordinator. At St. Luke’s, she “brought in tap dancers and stilters and a pot-bellied pug. I wanted to give people a little enjoyment.”

Her poem “The Last:15″ addresses the importance of living fully, doing those things that are really important: listening, appreciating, laughing, and those things “only I can do” or always wanted to do.

D’Anca regularly attends the LitQuake Elder Writing Project, as well CLC’s Wednesday and Friday afternoon writing classes. An active member of the Older Writers Lab, she “labors over every word,” bringing her story or poem to the group multiple times. She also participates Evan Johnson’s Cosmic Elders Theatre Ensemble where one of her pieces was recently performed.

It’s all on Zoom, of course. “I couldn’t make it out to all these groups without Zoom. It’s a lifesaver.” In the beginning D’Anca was kind of terrified of Zoom, but now she sees it as a banquet because there’s so much to choose from.

My last 15 minutes
I hope I won’t say
I wish I had listened more
with a full ear quiet mind
and showered waterfalls
of appreciation, realized
that a clean house
and doing everything
and no thing is not precious
said thank you more
laughed more
did things only I can do
made art out of scraps
danced in the front row
sang solo an out-of-tune hallelujah
to my beloveds
and an anthem
to me.

Politics and art are inextricably entwined in Johnson’s life. He’s a cultural worker and poet, deeply involved in the Chicano Rights movement and in his community, the Tenderloin. “I’ve been lucky in my mentors. Raul Salinas and Corky Gonzales in Texas, Jose Montoya in San Francisco. They led me along.”

The 12th and youngest child of a Mexican mother and Swedish father, Johnson grew up in a Chicano neighborhood in Austin, Texas, where he began writing poetry as a youngster. “I love my family. My family is very tribal; most of them stayed in Texas.”

After jobs in the Chicano Rights movement and as an AIDS educator in Austin, Johnson moved to the Tenderloin where he crashed out and slowly made his way back up. Being a “drug addict wasn’t an issue in the Tenderloin. Drugs were all around,” he said.

“That allowed me not to worry about it, and it became less interesting. I could do other things and not spend time worrying about it. I love the Tenderloin. I don’t regret anything I’ve done. I learned humility, compassion, not to be judgmental. It made me much more human.”

Though poetry was important to him, Johnson never called himself a poet. That is, until he attended a workshop on death and dying where he had to write his own obituary. He now writes poetry almost every day. “I agonize over every word; I torture it. In no other area of my life am I such a perfectionist.”

Johnson has taught poetry at Hospitality House, and in 2017 and 2019 received the Wildflower Institute’s Hidden Gem Award for his poetry – both based in the Tenderloin.

But he’s not unusual, he emphasizes. “The Tenderloin has more artists than any San Francisco neighborhood. Most of us don’t even consider ourselves artists. It’s a neighborhood where you’re free to be who you want to be.”

But a neighborhood where all are welcome to be who they want to be doesn’t happen on its’ own. It takes work. Johnson co-chairs the Tenderloin People’s Congress, an organization striving to ensure the neighborhood receives its full share of resources and remains a vibrant and thriving community for all residents, housed or unhoused.

His poem “The Great Spirit “is about his father’s death and going back to Texas for his funeral. His father was the youngest of his generation and the last to die. “With his death our generation has to step forward, give guidance to the next generation. We’re the elders now. One way of being older is to accept responsibility.”

1.
The Great Spirit
that is the sky
spreads it wings
to conjure a night
ablaze with stars
fragrant with juniper
and the promise of rain.

East to where my father
will be buried
at the edge of the southern plains.

2.
We shall all
each through our own journey
arrive
with bare feet and dusty hair
to a field of stone and yellow flowers.

There we wander
among the grave markers
and broken angels
mouthing the names
of ancestors and dead lovers.

The tragedies
and miracles of life
are exhausting.
We grow heavy with nostalgia.
Lower our bodies
to the stony ground.
Close our eyes
and give ourselves
to the cicadas singing
in the broomweed
and yarrow.

We dream.
We dream of purple thistles.

Barking dogs will wake
those who must return.

3.
Hiking up hills and along dried arroyos.
I seek the counsel of crows.
I laugh with coyotes.
I burn copal and sage.

When I cross a path
that my father walked
I miss the comfort of his arms.

His absence is a sack of stones.

Leaves swirl into
the quiet of the storm.

I am now
an elder of my tribe
and I must show no fear.