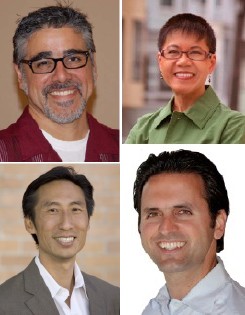 (Note: I address San Francisco and Berkeley races today, and state and national contests on Monday.)

While Bay Area activists remain riveted on the presidential race, there has been a dramatic upsurge in campaign activity around local races in the past month. As in the last two election cycles, big money independent expenditure campaigns from downtown and real estate interests have infiltrated key San Francisco supervisor races. These attacks failed then, and the question is whether they will succeed in 2008. San Francisco has 22 ballot measures, most of which have drawn little attention. But Proposition V has become a major vehicle for conservative interests to indirectly funnel money against progressive candidates, and PG&E’s $10 million “No on H” campaign is serving a similar function. I predicted 100% of the races correctly in June, but as investment bankers always say, past results are no guarantee of future gains. Here’s my analysis and projected winners.

In 2000, longtime progressive neighborhood activist Jake McGoldrick won an upset victory over incumbent Michael Yaki in the return of district elections to San Francisco. In 2004, downtown interests saw McGoldrick as vulnerable, and found a potentially strong candidate, Superior Court Judge Lillian Sing, to run against him.

Although Sing was a progressive judge, her campaign managers had her run as a pro-business, pro-landlord conservative. Despite a massive influx of downtown money, Richmond District voters rejected this message, and gave McGoldrick a surprisingly easy victory.

In 2008, downtown forces are heavily funding Sue Lee. Lee is running as a former “community organizer” and neighborhood activist. Lee’s progressive opponent is School Board member Eric Mar, who has built a base in the community over the years.

What makes this race hard to predict is that the last two supervisor races included factors—an anti-Willie Brown mood in 2000, a poorly run campaign in 2004—that make it unclear whether District 1 is more like the progressive District 5 (Haight-Ashbury) or the conservative District 4 (Sunset). I think the high tenant population in the district makes it closer to the former, which gives a huge edge to Mar.

I also see Mar as having superior name recognition to Lee, and a more committed volunteer base. Mar’s vote in favor of terminating P.E. credit for JROTC could cost him votes in a district where this issue has more importance than elsewhere in the city, but those who passionately support military training for high school students were unlikely to support Eric Mar.

Lee has run a strong campaign, and will benefit from the vicious direct mail attacks on Mar funded by independent expenditure campaigns and Yes on V.

I see Mar prevailing in a close race.

Two months ago, David Chiu looked like he would head to an easy victory. Endorsed by popular incumbent Aaron Peskin, the Harvard Law School graduate had no negatives and no serious opposition.

But the city’s downtown and real estate interests decided that, while they couldn’t defeat Peskin, they could wage an all-out campaign to beat Chiu. A blizzard of mail and money was then funneled to Joe Alioto, a virtual unknown in the district whose only prospects for victory rested on his last name and raising Chiu’s negatives through an expensive negative advertising campaign. This strategy appeared to be working, with an early October poll showing Alioto ahead of Chiu.

But that poll prompted Peskin to send out the same kind of “ALERT” about Chiu that he did for Chris Daly in October 2006, which brought activists flooding to the Daly campaign and secured his re-election. In the past few weeks, Chiu and his volunteers are everywhere, phone banks are full, and the campaign has forced the realtors to retract the false advertising about his record.

Chiu will win by a larger margin than many suspect.

This race has gotten less attention because the Board’s political alignment is not at stake; a strong progressive in the Ammiano tradition is assured of winning.

Mark Sanchez entered the race as a popular School Board President who presumably would also have the strongest field campaign, relying upon the extensive Green volunteer base that helped elect Ross Mirkarimi and Matt Gonzalez. I was not alone in assuming that he would get the San Francisco Bay Guardian’s top endorsement.

But David Campos and Eric Quezada have matched if not exceeded Sanchez’s grassroots volunteer effort, and Campos got the Bay Guardian’s top nod. Campos had already secured the Democratic Party’s backing, and winning the Bay Guardian nod gave him the two most important endorsements in District 9 (I see the Guardian’s influence as greatest in Districts 5, 8 and 9).

This race has similarities to District 1. In both cases, a progressive won in 2000 against a flawed opponent, and then withstood a massive downtown and real estate funded campaign to secure re-election in 2004. The actual political bent of District 11 is not clear, which is why this race is the hardest on the entire ballot to predict.

John Avalos is the clear choice of most progressives, and organized labor has helped Avalos build perhaps the biggest grassroots campaign of any local candidate this political season. Not surprisingly, Avalos is also the chief target of downtown and real estate interests, who have spent heavily denouncing him as a tool of “extremist” Supervisor Chris Daly, for whom he once worked as an aide.

Randy Knox has the support of Matt Gonzalez, and might be described as the candidate some progressives are backing because they believe Avalos cannot win. Knox has performed far better than expected, but his lack of name recognition and prior political involvement in the city makes victory unlikely.

Ahsha Safai is hoping to follow Bevan Dufty’s path to the Board (Dufty is backing Knox) by parlaying his experience in the Mayor’s Office of Neighborhoods into a district elections victory. Safai’s mailers pinpoint all the specific accomplishments that the candidate had brought to the community while working in the Mayor’s Office—an effective message for a district whose residents often feel they do not get their fair share.

Independent spending by realtors and downtown has boosted Safai, whose background as a real estate speculator has been obscured by his campaigning as a strong neighborhood advocate.

For the first time in the four years I have been making predictions for Beyond Chron, I must judge this race as too close to call between Safai and Avalos. The winner will be determined by which candidate gets most of Knox’s second place votes. Since Knox is drawing both progressive and moderate voters, how this plays out is too unclear to assess.

I will say this: progressives who think ranked choice voting is so great should look at this race. Avalos would easily defeat Safai in a December runoff, but he could lose in November.

Proposition B, the affordable housing set-aside, has broad support and has been backed by a field campaign that has been working for months. Originally, Mayor Newsom’s opposition to the measure coupled with the city’s financial problems made Prop B look like an uphill struggle. But Newsom has not used his popularity to defeat the initiative, and the opposition campaign to Prop B is too little, too late.

I see Prop B particularly benefiting from Barack Obama’s message, and winning easily.

If Proposition H, the Clean Energy Act, were put on the ballot to divert PG&E money from backing conservative supervisor candidates, it was a brilliant move. But if progressives put the measure on the ballot expecting to win, it was incumbent upon Prop H backers to build a massive field campaign necessary to defeat what everyone knew would be a multi-million dollar opposition campaign.

Progressives do not advance the cause of clean energy or public power by pushing initiatives that get crushed at the polls. And since PG&E’s $10 million campaign was foreseeable, blaming “big money” for Prop H’s landslide defeat is no excuse for the weak grassroots campaign backing the measure.

The primary purpose of Proposition V, the JROTC initiative, has been to serve as an unlimited soft money vehicle for anti-progressive candidates. Prop V is only a policy statement, but it has garnered over $200,000 in contributions—including $110,000 from the Committee of Jobs, whose agenda involves changing the Board of Supervisors, not education policy in city schools. Prop V will easily prevail.

Norman Yee and Sandra Fewer are widely considered shoe-ins. Jaynry Mak, who like the other two was endorsed by both the Democratic Party and the United Educators of San Francisco (the teachers union) is likely to finish third. Longtime incumbent Jill Wynns, Rachel Norton, and Barbara Lopez will fight it out for the fourth and final slot.

The big question in Berkeley is who will replace the late Dona Spring on the City Council. The two leading candidates, Terry Doran and Jesse Arreguin, present a sharp contrast. Doran is a retired teacher who spent two terms on the School Board, and will be a virtual automatic vote for Mayor Tom Bates’ agenda. Rent Board Commissioner Arreguin would stake out a progressive independent path in the Spring tradition, and, if elected, would be the only Councilmember under fifty (he is 24).

Conventional wisdom says that Bates-backed candidates always win in Berkeley, which would make Doran the favorite. But I like Arreguin’s chances to pull off the upset, and he is my pick.

Berkeley also has two hotly contested ballot measures. Measure KK, which would require voter approval of bus lane changes impacting parking, is headed for defeat. Measure LL, which changes the city’s historic preservation law, is backed by Bates and his allies and on that basis could be expected to prevail. But the “No on LL” folks have run a strong campaign, and this effort, coupled with voter confusion about the measure, should bring LL’s defeat.