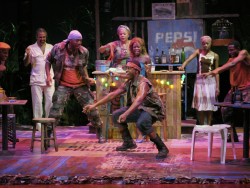 Right from the beginning “Ruined” draws you right into a frightening, sexual compelling atmosphere. This is a world where men rape at will, whenever they feel like it. When they run out of women, they turn to other men. Those that refuse to be raped are dragged into the jungle to be “Ruined” (damaged sexual organs). You could look at it this way: It’s the Dark Side of the musical “South Pacific.” But there are some wonderful light moments in the play. There is even a little band (wonderful) and a few songs sung by one of the “Ruined Girls.” No doubt about it – the Genius, outrageously talented cast is magnetic.

The story about war in the Congo is somewhat depressing. But the magnetism of the play keeps you in your seat. The script at times is savagely funny – and then without a moments notice – there is fear in the air and you begin to feel the tropical steam.

Sweating yet, are you? Well, you will be.

The complete fusion of character, music — and biting wit work splendidly in the Lynn Nottage play. It all takes place in a ramshackle bar that not only sells drinks — the Owner offers “Sex for Sale” to the Soldiers and Miners who work nearby at her ominous jungle retreat. She’s called “Mama” and she has surprising charm. It reminds me of some of the waterfront dives we used to have in San Francisco, until they paved over them.

I’ll tell you one thing. When you go to this bar – it’s not just the drinks that are shaken and stirred. No – you will get MUCH more than that. All I can say is that it might be a good idea to keep your legs crossed.

“DO YOURSELF A FAVOR. GO SEE THIS SPELLBINDING, EXPLOSIVE MIRACLE”

HOLLYWOOD CALLING: Michael Douglas Tunes Up for his Next Role as ‘Liberace.’ Michael Douglas says: “Part of Liberace’s charm – yes, his piano playing was wonderful – but people kind of inherently just picked up on his joy and graciousness, on how much fun he was having!” Matt Damon will play his young lover. Douglas thought that Damon was brave to play this role. Liberace died at age 67 in 1987. –“Extra.”

GUESS WHO’S COMING TO TOWN? If you want to see (and I’m sure you do) – Sarah Dash, T.V. Star Joyce Dewitt, Sally Kellerman (star), Florence Larue, Gloria Loring, Deana Martin (Dean Martin’s daughter), Melba Moore, Kim Nalley, Cece Peniston, the Fab Martha reeves, Paula West, Edna Wright & The Honey Cone, — plus Pia Zadora – ALL AT THE RRAZZ ROOM’S 3rd Annual Gala Celebration & Benefit for St. Jude Children’s Research Hospital. Fabulous Cocktail Attire recommended on Thursday March 17, 8pm. As one Studio head might have said: “There are more Stars at the Rrazz Room than there are in the Sky”. It’s all at the Hotel Nikko right off the swank Lobby. http://www.therrazzroom.com/

HEADLINES: Jimmie Fallon makes fun of Charlie Sheen. And, guess what – he sounds just like him …. More on Charlie: His twin boys have been removed from his home. But then, he still has his two toys – the goddesses.

AMERICAN IDOL: So far it looks like the Boys are out polling the Girls. Tonight we will find out – and a bunch will have to leave. TALKING OF IDOLS – One from an earlier Idol Contest will be the star of “Rock of Ages” at the Curran Theatre. Opens Next week. http://www.shnsf.com/

REGRETS ONLY: Imagine yourself in a Park Avenue Penthouse. You know — the way I live. It’s all about luxury, friendships, marriage and squandered riches. Isn’t that just what you love? The Paul Rudnick play opens at New Conservatory Theatre this weekend.

PINTER IN THE SPRING. The Pinter Play “The Homecoming” will open next Wed. (the same night as “Rock of Ages” – so the sidewalks will be crowded. Love the Poster in the Bart tunnels. The picture looks like it was dragged from “Cat On a Hot Tin Roof.” Sexy Pix. Has Homecoming come into the modern age? At American Conservatory Theatre.

And that’s the EXTREE! Wrap for today.