‘Ruin, Rubble and Race’: A Progressive Perspective on the 1906 Quake 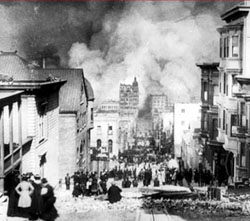 As San Franciscans watched in horror while Hurricane Katrina ripped across New Orleans, then witnessed the blatant racism that followed as survivors went months without governmental help, many of us probably assured ourselves with a pleasant thought – that it could never happen here. A forum being held next Monday, however, hopes to expose this thought for the myth that it is. Using the 100-year anniversary of the 1906 earthquake and the displacement of working class people, immigrants, and communities of color it caused as a launching point, ‘Ruin, Rubble and Race’ seeks to show that another major quake in San Francisco could cause a Katrina-like aftermath in a place considered to be one of the nation’s most progressive cities.

One of the lesser-known stories of the 1906 quake involves the city’s Chinese American population. Chinatown was severely affected by the tremor, which damaged the thousands of homes and businesses clustered there.

Two years prior to the earthquake, development interests had drafted a plan to relocate the Chinese population who lived there to the Bayview area. They hoped to then expand the Financial District into Chinatown, effectively wiping Chinatown off the city’s map.

“The city had endorsed the plan to relocate Chinatown before the earthquake,” said David Ho, one of the organizers of ‘Ruin, Rubble and Race.’ “But the earthquake really facilitated an opportunity for the usual suspects – the old wealth, the developers – to capitalize on it.”

It took a strong organizing effort and resistance to the proposal by Chinatown residents along with representatives of the Chinese government weighing in to stop the city’s plans. Even their efforts were unable to stop some of the destructive events that occurred during the quake, including the dynamiting of structurally sound Chinatown buildings to keep the fires raging across the city from making it up to Nob Hill.

Nicole Derse, another organizer of ‘Ruin, Race and Rubble’ who has recently been working to support Katrina survivors, says it’s easy to draw connections between the treatment of the Chinese-American population in 1906 to the way blacks are being treated in post-Katrina New Orleans. In both situations, those in power were attempting to dramatically alter the demographics and culture of an area, clearing out low-income people and communities of color to achieve economic gain.

Even worse, says Derse, is that it’s not hard to imagine modern-day San Francisco launching a similar effort in the aftermath of a disastrous earthquake.

“What happened in New Orleans isn’t unique,” said Derse. “Should an earthquake strike San Francisco, all signs point to us having the same type of displacement of poor people and people of color.”

‘Ruin, Rubble and Race’ will seek to open San Franciscans eyes to Chinatown’s role in the 1906 quake, the possibility that similar displacement could occur here in the future, and create a forum for discussing how to best organize to ensure Katrina doesn’t happen here. The event will feature a diverse panel of historians, organizers and activists at the front lines of current community struggles to foster this discussion.

The brainchild of a small group of dedicated organizers, the event has blossomed into a what should be a widely attended event, with The Chinatown Community Development Center, Mission Agenda, the Progressive Voter Project, Senior Action Network, and the San Francisco People’s Organization all co-sponsoring.

The event will be held from 6:30 to 8:30 at Gordon J. Lau Elementary School, located at 950 Clay Street, between Stockton and Powell. Admission will be free, and food will be provided.