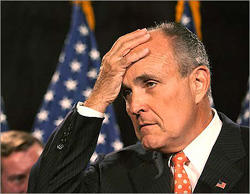 Statements made by former New York Mayor Rudolph Giuliani during the 2008 presidential campaign on issues such as Iraq, terrorism, and foreign policy have been essentially to endorse and completely embrace the Bush doctrine without providing any policy specifics of his own. While this may win over the conservative base in republican primaries, it may not sit well in a general election where moderates and independents play a huge part in electing the President.

The former mayor who is best known for his handling of 9/11 doesn’t seem concerned or is oblivious to the fact that a majority of the country in the 2006 midterm elections rejected the Bush doctrine, and disapproves of the way President Bush has handled the Iraq war. Although Senator John McCain (R-AZ), have been heavily criticized for wholehearted supporting President Bush’s Iraq war policy, the same has not been true for Mr. Giuliani. He has essentially gotten a pass from the mainstream media and Iraq war critics.

Rudy Giuliani is not a member of Congress and did not vote for the Iraq War Resolution like his rival John McCain, but has been one of its biggest

supporters. And when the ex-mayor make statements like the one’s he did on Tuesday at a Lincoln Day dinner in New Hampshire, it makes clear in no uncertain terms to the broader American public, to Iraq war critics and pundits… just how much of Giuliani a strong backer and proponent of the President’s Iraq war policy.

On Wednesday Giuliani did not back down from his previous statements and released a transcript distributed by his campaign which stated: “They do not seem to get the fact that there are people, terrorists in this world, really dangerous people that want to come here and kill us,” Giuliani said on The Sean Hannity Show. “They want to take us back to not being as alert which to me will just extend this war much, much longer.”

New York’s ex-mayor stated that if a Democrat is elected, “it sounds to me like we’re going on defense. We’re going to wave the white flag there.” But, he said, if a Republican wins, “we will remain on offense” trying to anticipate what the terrorists are going to do and “trying to stop them before they do it.” Giuliani has also stated on Larry King that he still thinks Iraq was worth invading knowing what he knows now.

Again, this may not matter in a Republican primary, but voters in a general election will find comments like that one troubling. Similarly the 2006 midterms provided the same smear and fear politicking by top Republican strategist Karl Rove, but Democrats still won the majority in both houses.

According to the latest USA Today/Gallup Poll a majority of voters approves of a timetable for withdrawing US troops from Iraq, and a majority of

Americans also disapproves of how President George W. Bush is handling the situation in Iraq. Most polls regarding Iraq have consistently showed most Americans believe US troops should begin to pullout of Iraq. A new UPI/Zogby Interactive poll showed “more than half of Americans give President Bush 55% negative ratings on his performance in keeping the United States safe from terrorism and give the Department of Homeland Security a similar negative rating (56%) on its efforts. Nearly half of Americans (49%) believe the Bush administration has tipped the balance between personal security and personal freedom too far towards security, depriving the American people of too many freedoms.”

Rudy Giuliani despite his rhetoric has not visited Iraq, has no foreign policy and political experience beyond the municipal level. He is also the least experienced top-tier presidential hopefuls in both the Republican and

Democratic parties. If he wins the republican nomination, he will have to be able to articulate his position on Iraq as being more than just a continuation of Bush’s war on terror policy, which most Americans have rejected. This becomes an even greater concern given the fact Giuliani has relatively little foreign policy experience.

EDITOR’S NOTE: Nadia Brown is a freelance writer, poet, and author of Unscrambled Eggs. She is also the founder of Author-Promotion.com. For more information about her, visit her website at www.nadiabrown.com