Ru Paul – Putting a Little of the Castro in your Box; Colma: The Musical; Special Forces – Big Sound Effects 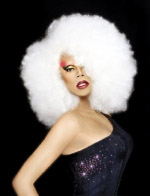 It was the Saturday night before the Gay Pride Parade when I was invited to see the Ru Paul movie Starrbooty. I took the underground train, because I always find it to be more civilized than the over ground Muni buses. When I got out of the tunnel at Castro, I noticed a lot of people milling around. When I crossed the street and tried to get to the Castro Theater I was stopped by a couple of cops. One said: “You have to walk on the pink carpet. The sidewalk is closed.” I said, “I don’t want to walk down the pink carpet –I’m going to the Castro Theatre.” The lady Cop said: “Oh, O.K. Awesome.”

So I trotted down past the long line to let the publicists know that I was there. They told me that the doors were not open and that Ru Paul would be along in about a half hour. I think that the look on my face gave them a hint that I did not want to stand and wait outside for a half-hour, so one of them said “Or, you could go inside and wait”. I did that and found what could be called a Royal chair with a high back right by the men’s restroom. So, I sat there and the long line of guys moved slowly in front of me waiting to get to the john in the basement. Well, at least I had a seat.

After awhile I went back outside to see Ru Paul Arrive. Just before the Star arrived, a naked guy strolled past us. A guy next to me said out loud, “have you ever noticed that the naked guys are never the hot ones?” Another one chimed in and said. “Yeah, but I’d have sex with him but under a sheet.”

Right after that comment Ru Paul arrived – the shouts, screams and whistles gave us a clue. And then the star of the movie who is at least seven feet tall made a grand entrance past the box office of the theater. She was wearing an enormous white bouffant wig. You could have easily confused her with Diana Ross. Ru Paul signed autographs smiled at the clicking cameras and answered a couple of quick questions. She played it every inch a star. Shucks — her heels were taller than me. I tried to take a couple of photos but I either aimed too high or too low. Most of the pictures I took were of her midsection.

I followed her into the theater. She announced to her entourage: “Where should I sit? I don’t want to block anyone’s view.” Well, that would be a problem. At seven feet tall and a wig that was at least four feet tall, I don’t think she could find a seat that wouldn’t block someone’s view.

The Movie: Remember the old T.V. Series “Maxwell Smart?” He was kind of a bumbling Detective who never got things right, but always got the crooks. In Starrbooty, Ru Paul plays a detective who is sent out to crack a Prostitution ring that lures prostitutes into their lair, only to cut up their body parts and sell them to rich people. I can’t even tell you what the body parts are. But here is a hint. You need them for sex.

Keep in mind that this is a comedy. In the T.V. series “Max” Smart was always clothed. In this takeoff, he waves his ‘standard’ around in the back of a car with Ru Paul as he tells her that to make a good impression in front of the Prostie ring she would have to go all the way. Or down the way would be more like it. Wearing glamorous Prostitute clothes, Ru Paul manages to get into the “Ring” and more trouble than a Drag Queen could expect. But everything turns out fine in the end, just like an ending of a ‘007’ movie.

Ru Paul marries “Max the Dick”. Apparently she liked what she saw in the back seat of the car. The movie is a lot of fun. It has a lot of explicit sexual scenes that may not be for everyone. But not to worry, the movie won’t be opening at the Metreon or the Embarcadero Theater for that matter. I was surprised that the place wasn’t raided.

RATING: THREE BOXES OF POPCORN!!! Or maybe it should be Three Condoms!!!

The new movie that opens this week at The Embarcadero Cinema is the locally produced movie Colma – The Musical. The story is about three friends who are going through the coming of age thing. One guy is an actor, one is a gay would-be poet, and the third is a female who is overweight and always hoping that she will get laid. Some people might consider her a fag hag.

One minute they have this great bond between them, but when they go out to party they drink too much and say things that bring storm clouds to the relationship. The Actor seems to float from being gay and straight.

The movie was filmed in Colma, California – a place that everyone jokes about being the City where there are more dead than residents. It’s a small town that is known for its graveyards. Since it is called a musical, they sing. Sometimes on the hood of a car and other unlikely places. The music is pretty much the same from song to song. Only the lyrics change. Some of them are quite clever and amusing.

As for the voices of the singing actors they are weak. If this were a Broadway show, it would already be closed. Even the acting is not spectacular. They look the parts, but there is very little depth. It’s as if the director tells them “Now do something stupid.” Then they do something stupid.

I really didn’t like any of the characters. I found them all to be pretty obnoxious. Teenagers have been known to do a lot of dumb things, but this film makes complete fools out of that age bracket.

There are some really swell shots of interiors. The Cinema photography was quite interesting, but I did not find Colma to be cutting edge or especially inventive. This story has been done before, and no doubt will be done again. But as an Indie film, it will pick up some cult following and they will of course be mostly teenagers. Adults will most likely find it to be self-pitying hog wash.

‘Special Forces’ the play is a fascinating, but strange look at the War in Iraq. Written by Artistic Director John Fisher, who also directs and acts in the film has concocted a story about the war and other issues as well. There is a Drag Queen who performs at a bar in Kuwait. One of the soldiers has taken a keen interest in the Drag Queen. That interest leads us to believe that he is having sex with the trans-gender.

Fisher plays Colonel Gerald Jessup with a stern Marine upper lip. He’s likeable, but you would not want to cross him. But underneath the toughness Fisher brings to the character a softness that shines
from time to time, making Colonel Jessup likeable.

There is a lot going on in this play. There is the Marlena Dietrich-like Drag Queen (Mathew Martin) on one side and a female LT. “Dame” Anderson (Helen Sage Howard). I not sure what Fisher is trying to
show here – but I saw a woman who was out of control. On a secret mission she shoots the wrong guy, knowing that she shot the wrong guy, but yet is not punished by Gol. Jessup.

What comes out of this is that when you give a woman too much power they all of a sudden start to grow testicles. This kind of person seems to want to show, beyond any reason that they can do everything that the men can do and even better. At the risk of sounding misogynist this doesn’t always work on the battlefield.

It’s hard to tell what the real message is in the play. There are so many directions that it takes and nothing really takes us to the end. Oh, it ends – but leaves you wanting more explanation. The play is
well crafted and well acted. Howard (Dame) does a great job of acting, but the role is over the top. If that were a real situation she would be up on charges.

The Colonel even sends the Drag Queen to the front dressed up in a kind of Muslim dress and head covering to deliver a message to his ill-fated troupes after he realizes that he has sent them on a death trap mission. Well, I guess Mati Hari did something similar during World War I. Amusing, but this Colonel should go back to basic training. He not only puts his troops in harms way, but also sends the Drag Queen, who he has previously told that he’s shutting her down. “You can’t perform here”, he tells her. But it’s all right for him to send her to the front.

The action onstage acting is exciting and the sound of battle noise was quite impressive. The stage is pretty much bare, but serves the action well. The actors are on a ‘High Plane’ and Fisher’s directing was crisp and expedient. Also, the lighting was very effective. When you see it, let me know what you thought of the story.