New Film on the Great but Forgotten Rosenwald 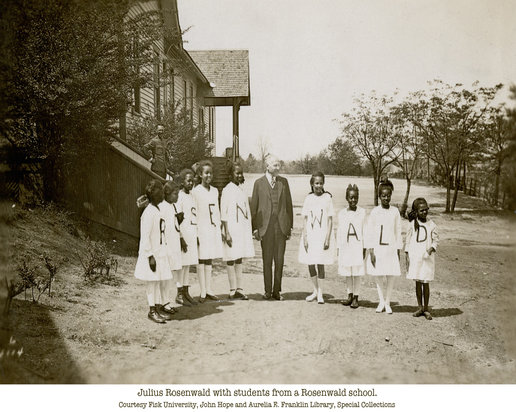 Julius Rosenwald, Kempner’s film subject, was both influential businessman and philanthropist.  As the businessman, he turned Sears Roebuck and Co. into the early 20th century version of Amazon.com.  As the school funder, his seed money helped build over 5,000 rural schools in the Jim Crow-era South.  Finally, as the nurturer of future talent, his fund’s grants helped what W.E.B. DuBois called the “talented tenth” develop their individual potential in various fields.  While Rosenwald’s philanthropy helped shape the course of 20th century African-American life, Kempner deftly avoids turning the socially-minded businessman into a white savior.

The genius of Julius Rosenwald’s philanthropy didn’t come from the mere act of transferring money for a good cause.  It catalyzed both black community pride and better interracial relationships.  Providing one third of the funds needed to build a new school came as a challenge to both the black and white communities to raise the balance.  In the white community’s case, those funds usually came from the state board of education.  But in the black community, everything from holding food sales to contributing sweat equity went towards the building of what became known as a Rosenwald school.  The love and community pride given to these rural black schools imbued them with a magnificence which matched the bigger white schools.

The section dealing with the Rosenwald schools is the strongest portion of Kempner’s film.  It nimbly captures the emotional validation the schools provided to the South’s rural black communities by showing they could work together for a larger communal goal.  The careers led by such Rosenwald alumni as Congressman John Lewis, Washington Post columnist Eugene Robinson and acclaimed writer/civil rights activist Dr. Maya Angelou among others serve as living examples of the Rosenwald schools’ benefits.

Kempner boldly lifts the Rosenwald schools part of her documentary out of feel-good turf by discussing why educating rural blacks was a political act.  Southern society’s economic and political order thrived in part on the existence of an uneducated and subservient black labor pool.   Altering that oppressive dynamic by giving blacks education quietly undermined that order as well as calling into doubt the unstated assumption that blacks were incapable of matching white cultural achievements.

Rosenwald’s decision to spend what would be a billion dollars in today’s money to repeatedly aid America’s black communities came about through a confluence of three factors.  First, there was his sense of empathy in seeing similarities between Russian pogroms against the Jews and Ku Klux Klan public intimidation of blacks.  Second, there was the mentorship of social activist Rabbi Dr. Emil G. Hirsch, who taught him how to use charity to make peoples’ lives better.  Finally, there was Booker T. Washington, who shared Rosenwald’s belief in practical over theoretical change.

Kempner’s film gives Washington credit for improving the lot of America’s black communities even without directly confronting segregation.  His input sparked Rosenwald’s funding of rural school construction.  Teaching practical skills at Tuskegee University gave the university’s graduates skill sets beyond the limited employment options racist society offered.  Like Dr. Martin Luther King Jr.s’ “content of one’s character” line, Washington’s “lifting oneself up by the bootstraps” got co-opted by conservatives to demean blacks who couldn’t rise above their current lot.  But the film shows that the original intent behind the sentiment was black empowerment independent of white benevolence.

The recipients of Rosenwald grants covered an impressive range from historian John Hope Franklin to blood researcher Dr. Charles Drew.  Kempner breaks up what would have been a long but storied list of recipients with anecdotal moments.  These stories include tales of how Rosenwald money helped the notoriously slow Ralph Ellison get his classic novel “Invisible Man” developed, or how the French study grant financed by the Fund helped Alberta Savage learn the skills needed to become an award-winning sculptor.  Yet even with these anecdotes, this portion of “Rosenwald” feels emotionally distant compared to the film’s earlier joyous parts.

What still makes “Rosenwald” worth seeing is Kempner’s magnificent gift for finding the right analogy or oddity that breaks down the past’s separation from the present.  It could be learning young Julius Rosenwald lived across the street from Abraham Lincoln’s house.  Or it might be how Eleanor Roosevelt’s impromptu plane trip paved the way for black airmen to fight in World War II’s skies.

Honors for the most relevant historical rarity resurrected by Kempner belong to a film clip of a speech given by Rosenwald.  Its subject was the alleged wisdom of the rich.  He frankly describes those who’ve made great fortunes as not necessarily being smart.  As someone who himself never finished high school, the film’s subject piercingly characterizes most rich men as mediocre types lucky enough to stumble on a business opportunity that couldn’t help but bring them wealth.  Seeing this clip will spur a few audience members to mutter “Trump.”

If Kempner skimps on giving a well-rounded portrait of her subject, it’s ultimately forgiven because Rosenwald as a person becomes a supporting character in his own film.  What matters is seeing what was wrought in the wake of Rosenwald’s financial largesse.  In that regard, recently deceased ex-NAACP head Julian Bond acts as the soul of Kempner’s documentary.  As Bond memorably notes, Rosenwald’s generosity created his generation…which later created the generation that elected President Barack Obama.