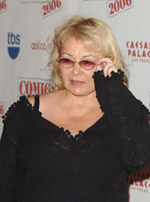 “I’ve never heard any of them say anything except for “accept me ‘cause I’m gay”… I don’t give a damn who anybody has sex with, as long as they’re not underage or an animal … I’m just sick of all the divisiveness, it’s not getting any of us anywhere.” –Roseanne Barr

Dear Roseanne: Next time, do a little research before you open your mouth. Politically active queers have always been multi-issued.

In fact, the LGBT movement owes its very existence to a multi-issued Communist Party member named Harry Hay who organized a support group for leftist gay men in Los Angeles in 1949. Hay felt it was important for queers to have a space of our own, much as feminists did in the 60s and 70s. But he never abandoned the fight for the rights of workers and others.

After the Stonewall Riots in New York’s Greenwich Village in 1969, the newly formed Gay Liberation Front (GLF) forged alliances with the Black Panthers, straight feminists and the anti-war movement. GLF members marched and organized in support of many leftist causes. For that, they sometimes received grief from within the queer community.

Straight leftists weren’t always comfortable with out queers. We had to fight hard to gain their acceptance, even when we were putting our bodies on the line for leftist causes. Some radical groups saw homosexuality as a symptom of the decadence of a capitalist society. Others dismissed our movement as frivolous. Those attitudes still exist. It wasn’t that long ago that Ralph Nader characterized our almost 60-year struggle as “gonadal politics.”

Today, queers in San Francisco regularly join workers on picket lines, and organize for a living wage, universal healthcare, and affordable housing. Queers such as Tom Ammiano, an out supervisor, successfully pushed through a universal healthcare plan for all San Franciscans. Once implemented, it will guarantee that all residents of our city have basic medical and dental coverage. Ammiano also helped pass our living wage ordinance, which covers city service contractors and leaseholders at the airport.

Then there’s the countless rank-and-file LGBT activists all over the country who can be seen every day doing progressive work, whether it’s fighting for housing for homeless and poor people, standing up for the rights of immigrants, or mobilizing thousands to take to the streets to protest George Bush’s illegal and immoral wars. We are truly everywhere and in every movement. We have been and always will be.

Sure, you can probably find queer folks who only want a piece of the American Dream, that lavender picket fence in the suburbs with the dog and the two-point-four kids. You can find that in any community. There are plenty of straight folks who don’t give a damn about the lives of poor people or workers without health benefits. Some of them even get elected to public office.

If you haven’t heard any gay or lesbian activist say anything about an issue other than our own, maybe it’s because you were too busy shooting off your mouth to listen to what we were saying.

Tommi Avicolli Mecca is a radical, southern Italian, working-class queer performer, writer and activist whose work can be seen at www.avicollimecca.com.