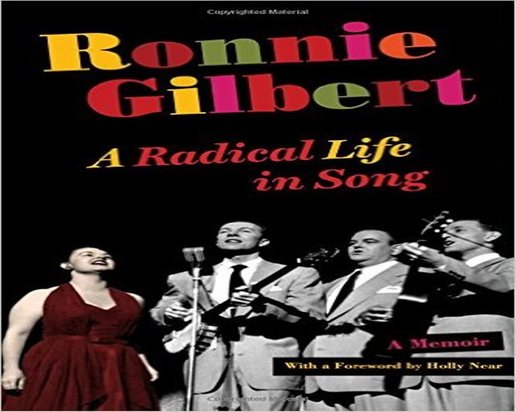 The term “legend” is too often thrown around these days, but in folksinger and activist Ronnie Gilbert’s case the label fits fits. Gilbert died at 88 this past June but  she had already completed her long awaited and just released memoir, Ronnie Gilbert: A Radical Life in Song.

Ronnie Gilbert was the preeminent female folk singer from the post WWII years through the early 1960’s. These years marked folk music’s commercial high point in the United States. Best known as a member of the Weavers, Gilbert survived the notorious blacklist of the McCarthy era to renew her successful singing career in the 1980’s.

Gilbert was always more than a singer. She was an activist whose politics—a belief in free speech and in full civil rights for African-Americans—opened her to charges of being a “radical” and a Red. Gilbert is very honest about the challenges of combining a commercial singing career with a commitment to radical politics, and her candor helps make this book special.

Ronnie Gilbert was born in 1926. Her mother was among the Jewish women immigrants  whose work in sweatshops radicalized them. Gilbert’s mother was a dressmaker in the ILGWU, and exposed her daughter to radical politics at an early age when she took the ten year old Ronnie (whose name was then Ruth) to hear Paul Robeson at a downtown New York City rally.

Gilbert sang in choirs as a youth and had a great, booming voice. In 1941, while working for the Federal Housing Authority in Washington DC, Gilbert stumbled upon a singing group that was practicing in the same apartment complex where she lived. The singers called themselves the Priority Ramblers. The group mixed country style music with topical lyrics (“Lincoln set the Negro free, why is he still in slavery? Jim Crow!”) and Gilbert was hooked.

Gilbert loved her time with the Priority Ramblers but was depressed by the extreme racism practiced in the nation’s capital. She notes how she “longed for New York’s illusion of integration, at least the seemingly common agreement that racial discrimination and the poverty that resulted from it were unfair.”

So Gilbert decided to quit her job, return to complete her high school education, and then move back to New York City. Those were the days when working class people could still find an affordable apartment on New York City’s Upper West Side, and Gilbert and her mother lived there after the war. In the summer of 1944 Gilbert was a counselor at a summer camp when she met a fellow counselor and young singer named Fred Hellerman. A year later she and Hellerman were asked to join a People’s Song chorus that Pete Seeger and Lee Hays were putting together. After the chorus spent 1948 singing for activists with the Henry Wallace presidential campaign, the Weavers were soon born.

Gilbert’s account of the launching of the Weavers begins the raising of an issue often excluded : how do cultural figures maintain their political integrity when they also need salaries to survive? All the Weavers except Seeger wanted commercial success because they had rent and bills to pay. This meant negotiating record deals and concert appearances, both of which required the singers to deal with the business side of the Weavers.

Fortunately, this is not one of those stories about talented cultural figures being cheated by managers. To the contrary, the Weavers were managed by Harold Leventhal and Pete Kameron who successfully navigated the often divergent interests among the group’s members.

Gordon Jenkins, the legendary composer, arranger and late father of longtime SF Chronicle sportswriter Bruce Jenkins, signed the Weavers to their first record deal while running Decca Records. Jenkins added arrangements and even lyrics to the album, giving the Weavers a lush sound unusual for folk singing groups of the time.

By 1950, the Weavers were selling millions of records and were national celebrities. Ronnie Gilbert loved life on the road but Seeger and Hellerman did not. The Weavers even played Las Vegas. While Gilbert and Hellerman gambled and enjoyed the town, Seeger “could hardly contain his contempt for the place.” Seeger threw a silver dollar into the hotel swimming pool to show his colleagues how they were throwing their money away gambling, only to see Gilbert’s husband dive in to retrieve it.

The Weavers huge popular success soon gave way to the Red Scare. The group was careful to avoid “any hootenannies or left-wing performances” after the anti-communist drive began, and their jukebox hits like “On Top of Old Smokey” and “So Long It’s Been Good to Know You” were hardly radical anthems.

But this book reminds us that for all of the blacklisted former Communist Party members of that era, there was an even larger number of cultural performers barred from commercial appearances that had never been CP members and had no “radical” political affiliations at all.

Actress Lee Grant was blacklisted from 1952-1964 because she defended the integrity of a blacklisted performer at a wake after his death. I describe in my new book, The Tenderloin: Sex, Crime and Resistance in the Heart of San Francisco, how the remarkable California Labor School was effectively shut down in the Tenderloin because it hosted a lecture by Dr. Frank Oppenheimer, who had once been a Communist Party member (Oppenheimer later founded the hugely popular San Francisco Exploratorium).

For the Weavers, Pete Seeger was the linchpin of the government attacks. The blacklist put the Weavers out of business until a 1955 Christmas Eve concert at Carnegie Hall. This began the Weavers resurgence. Seeger left the group in 1957 over his refusal to play in the background for a cigarette commercial (the other Weavers all smoked) He would not return until the Weavers’ fabled 1980 Carnegie Hall reunion concert, which also marked Gilbert’s revived career as a folk singer (the concert is available on dvd).

A Life of Change

By the 1980’s, Ronnie Gilbert was an inspiration to Holly Near and a new generation of female singers. Near even dedicated an album to Gilbert before the two had met. Gilbert’s political interests broadened, and she began a longterm lesbian relationship. From the 1980’s until her death last June, Ronnie Gilbert never “retired.” She was always learning, always growing, and remained as committed to building a just world as she was as a youth.

Ronnie Gilbert’s idealistic spirit and faith in a better future never wavered. And it is well captured in this book. Readers of Ronnie Gilbert: A Radical Life in Song will finish the book inspired, reinvigorated, and more committed than ever to continue the fight for justice.

Randy Shaw is Editor of Beyond Chron. Thirty years after the Weavers’ “Goodnight Irene” topped the charts, he sang it at his wedding.