Ron Paul Supporters “Scaring” People… and Darn Proud of it. 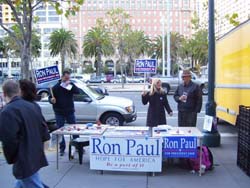 At 12:10 this past Saturday afternoon, the Ferry Building Farmers Market was in full swing, and so were a group of supporters for 2008 Presidential hopefuls. Well, only one candidate actually. According to Ferry Building staff the “very consistent” Obama people had left already and “the woman with the ironing board for Hillary” was long gone too. But there were the Ron Paul people, still, literally, whooping it up with the crowd like a group of Laker Girls on a mission.

“This is a happy revolution. It’s back to the love scene,” said 50-something San Franciscan Kevin McGlynn. “Do I got any Ron Paul supporters around here,” he shouted into the crowd of vegetable and gourmet chocolate shoppers. Passersby answered him two “whoa”s a “Go Ron Go!” while other volunteers passed out literature, Paul DVDs and “looked people in the eye” while striking up conversations.

“It doesn’t take long,” he said. “All you gotta do is catch the fever.”

In a town where one would expect Kucinich supporters to be swarming about, it’s a libertarian, anti-abortion Texas Republican Representative that has arguably gathered the largest and, at minimum, the most strikingly cheerful group of supporters at gatherings from the Summer of Love commemoration to the recent big antiwar rally.

Ron Paul’s views are on one hand alarming to many progressives, with Paul advocating private property rights over environmental regulation, elimination of the IRS and of course aggressively pro-life positions. On the other hand, he advocates pulling out of Iraq and closing most American overseas military bases.

Fifteen people volunteered at the Paul table that day, just like many have since late summer. They get there before the market opens at 8:00 a.m. and they stay until after closing time at 2:00 in the afternoon. But they’re not just showing up at outdoor public events. They’re showing up at old-school Republican gatherings too. It was one last week that got these Bay Area Paul people some national attention after things turned a little “feverish” at a local straw poll.

The San Francisco Republican Alliance conducted a straw poll on Wednesday, December 5th at the Fisherman’s Wharf Holiday Inn. A big Fred Thompson banner was hanging from the wall, with most of the $33-per-plate dinner guests themselves resembling the decidedly unenergetic Thompson.

As is the case with most straw polls, participants pay for the privilege of voting. Wednesday’s event was $33.00 for dinner and a vote, or $5.00 for just a vote. Things were going fine until dessert was being served, that’s when 75 Paul supporters walked in and event organizer and perpetual Assembly candidate Gail Neira decided to change the rules saying that the influx “wasn’t fair” and that only the dinner eaters should vote. When one non-eater then shouted that he was ready to pay $33 for every Paul supporter in the room, Neira cancelled the vote entirely and told everyone to go home. The situation grew loud enough that hotel security soon showed up and wished everyone a good night.

KCBS reported on the event with the story being picked up by outlets in several states, most prominently, by broadcast stations in New Hampshire and Iowa. CNN ran with it too. Blogs noted and debated it and, as of December 9th, 146,000 people had viewed the confrontation on YouTube.

They’re derided as “nuts” and even “terrorists” online, but the group outside the Ferry Building was friendly, very active and decidedly non-nutty. Their strategy isn’t too nuts either. Changes in how Republicans divvy-up their national convention delegates mean these Bay Area volunteers could have a disproportionate impact on the primary.

Of California’s 173 national Republican convention delegates, three go to each of the state’s 53 congressional districts, (14 more go to the statewide winner or remain uncommitted). This paradoxically means that by focusing their energy on traditionally Democratic districts like those in the Bay Area, grassroots campaigns can get a much bigger bang for their organizing buck.

Specifically, San Francisco’s 34,000 registered Republicans will get the same number of delegates as districts with 200,000 Republicans. Thus, for every six primary voters you get in Orange County, you only need to get one here.

From there, the numbers get even more enticing to Paul supporters. Considering that less than 50 percent of registered voters turnout for primaries, the San Francisco Republican pool drops to less than 17,000. Divide that by the number of candidates and you’ve got yourself to a place where 3,000 to 5,000 votes would probably cinch the district.

This lower threshold is something local Paul supporters are very well aware of, and it’s something that might help explain their enthusiasm.

If the number of former Democrats and independents among the volunteers is an indication, those numbers are coming largely from people transferring their party registrations. Unlike Democrats, Republicans have a closed primary requiring all participants to be registered Republicans by January 21st.

“You hold your nose and sign the dotted line,” said thirty-something David Baker of Hayward. Baker said he had just switched to being a registered Republican. He said that he had registered as a Democrat at the DMV, but had never voted. This was his first Paul event. “Ron Paul cured my apathy.”

Paul supporter Gerald Cullen of San Francisco seemed to sum up a focus on the transfer strategy in an email to the 450-person San Francisco Meetup.com group Sunday night.

“I have decided that my old play book of focusing on Republicans may not be valid with Ron Paul. His appeal crosses party lines and may be even more appealing to Independents and Democrats,” he wrote.

The San Francisco group alone has held more than 200 events since May, with several other local Paul Meetup groups conducting events of their own. Some don’t seem to be attracting any signups at all, while others, like the now infamous straw poll are attracting scores of participants. Their latest event is scheduled for tonight, at a Rudy Guiliani fundraiser in Woodside. The communications promoting it have an attitude that points to the increasing boldness of the Paul volunteers.

“We do not want this fund raiser ($1,500/plate) to go unchallenged. And you know how nervous Gooliani gets any time he sees a Ron Paul supporter. So let’s go scare him!”

Finally, on a national level, the Paul people are following unorthodox but somewhat infectious strategy too. About a month ago a Paul supporter suggested on line that it would be great to have a blimp. As of 5:00 p.m. Sunday, December 9th, organizers had received more than $257,000 to pay for the flight time of the new Ron Paul blimp commemorating the Boston Tea Party, scheduled to take flight Tuesday, December 11th in North Carolina en route to Washington, New York City, Boston and finally New Hampshire. According to organizers, just the money raised so far should keep the airship in the sky for at least the next two-and-a-half weeks. They have another $150,000 in pledges.

This comes after a fundraising quarter where they raised more money from supporters than Thompson, Mitt Romney or Guiliani, including a record-breaking $4.2 million in just one day. They hope to build an even bigger “money bomb” on December 16th, the anniversary of the Tea Party.

Offline Paul seems to have gotten a bounce from his increased media attention in November, with the latest Pew Research Center poll showing Paul climbing up to 9-percent in New Hampshire, but others show him with support of just two-to-four percent of likely voters. Time will tell how long the Paul campaign itself keeps afloat. Supporters in San Francisco were happy to compare Ron Paul’s future to that of the weather outside the Farmer’s Market. While one acknowledged the chilly breeze that greeted them, he looked to the sky smiling. “There’s not a cloud in the sky.”