Romney Stirs Up Democratic Base 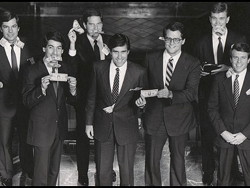 Mitt Romney bores Republicans, but he is galvanizing progressive support for President Obama. Romney’s attacks on immigrants, refusal to challenge Rush Limbaugh’s calling women sluts, and Dick Cheney-like rhetoric about waging war against Iran have bolstered the President among three key constituencies disappointed with his first term: Latinos, young people, and anti-war activists. Progressives long frustrated by Obama relish his denouncing Romney’s “bomb first, ask questions later” Iran policy, and appreciate his chiding the GOP frontrunner’s refusal to criticize Limbaugh. And despite Latino disappointment with Obama’s performance on immigration reform, Romney’s plan for “self-deportation” and backing of Arizona’s anti-Latino law as a “model for the nation” has given the President a 70%-14% lead among this crucial constituency.

Contrary to popular perception, Mitt Romney is a great community organizer. Unfortunately for the GOP, he is organizing people to mobilize against him.

Romney appears to be going out of his way to energize the most disillusioned components of the Democratic base. Barack Obama’s campaign has lots of money, but there is no way it could match Romney’s success at getting this base to align with the President.

Consider Romney’s efforts to push these disaffected constituencies into not simply voting for Obama, but likely working on his behalf:

Progressives disappointed by Obama’s escalation in Afghanistan and the ongoing war without end were reminded last week of the Republican alternative: a new war with Iran that would make the Iraq disaster seem like a cakewalk. The Iran debate shows that Romney, John McCain and other Republicans learned nothing from Iraq, and are willing to spend billions of dollars and sacrifice tens of thousands of lives for their military fantasies.

Young people coming out of college jobless and deep in debt were frustrated by the President’s delayed focus on job creation. But after seeing Romney and the Republican Party declare war on birth control and women’s health needs – as well as on gay rights, Latinos, the environment and on college itself – young voters are squarely in Obama’s camp.

A February 28, 2012 Rolling Stone article, “Why Democrats Have a Problem with Young Voters,” cited what author Rick Perlstein described as “worrying” polls showing declines in young people’s percentage of the overall electorate, as well as their levels of Democratic registration from 2008 to 2011. Yet such polls ignore the impact of campus voter registration efforts during presidential election years, and the lack of such drives in years like 2011, which lacked national elections.

Young people did not vote in 2010, which is why Republicans took the House, legislative statehouses, and the governorships of Wisconsin, Ohio, and other states. But if anyone doubted whether young people would turn out in large numbers in 2012, Romney’s campaign has ensured this – to Obama and the Democrats benefit.

Despite polls showing a majority of Latinos disapproving Obama’s performance on immigration reform, as of last week this key constituency backed Obama over Romney by a remarkable 70%-14% margin. Even a majority of Latino voters who backed McCain in 2008 are now backing the President.

Give Romney credit for this record low GOP Latino support. His call for Latino “self-deportation” and description of Arizona’s anti-Latino immigrant law as a “model for the nation” have moved even Republican Latinos into Obama’s camp.

Romney has gone from employing undocumented workers as gardeners while Governor of Massachusetts to promoting immigration policies far to the right of Gingrich and Santorum. Expect the highest Latino voter turnout in history in November, with Obama maintaining close to his current 6-1 victory margin.

Romney has also done a great job mobilizing women voters for the President, particularly those who use birth control. And the more Romney and fellow Republicans promote the Sarah Palin “drill, baby, drill” agenda, the more once disappointed environmentalists feel obligated to work hard on Obama’s behalf.

Contrary to popular belief, it is not always the case that progressives move to support a Democrat in the face of a right-wing Republican challenge. Progressives abandoned Jimmy Carter for Citizens Party candidate Barry Commoner in the 1980 race against Ronald Reagan, and I did not see many progressives going all out for Walter Mondale in 1984.

The difference in 2012 is the very real risk that a Republican President would also have control of the House and Senate. This broader political reality is why Romney and Santorum have energized progressive support for Obama better than the President’s campaign could do himself.