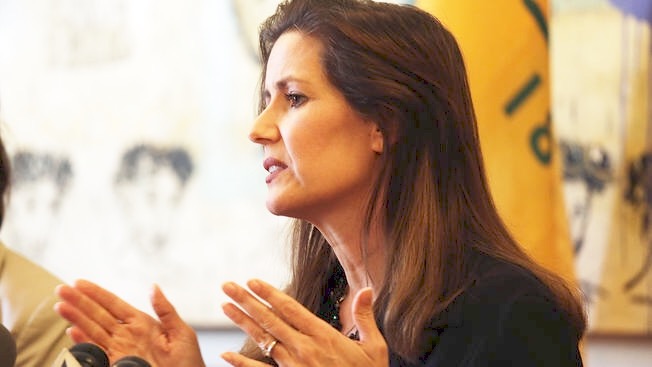 These are not the best of times for Oakland’s Mayor Libby Schaaf. Now routinely booed at public appearances, Schaaf  is grappling with big city challenges without the power of most big city mayors.

I’ve been a big fan of Schaaf’s since she ran for mayor. She got off to a great start and Oakland seemed to finally have the savvy, hands-on mayor it deserved.

But Schaaf has hit choppy waters. Some of her problems are not her fault, others are of her own making, and some are institutional. Ultimately,  Schaaf must more effectively exercisie power, as Jerry Brown did when he was Oakland mayor.

Many people blame Schaaf for the Raiders and Warriors leaving Oakland. That’s ridiculous.

Schaaf deserves credit for refusing to pay blackmail to the Raiders. The team is leaving because Mark Davis wants more money. Period. Las Vegas gave it to him and the city will regret it.

Schaaf could not stop the Warriors from returning to San Francisco. She deserves no blame for their departure.

The optics of two professional sports teams leaving Oakland are terrible. But it was not Schaaf’s fault.

Schaaf has also been unfairly blamed over the city budget.

Oakland has never had sufficient revenue to satisfactorily address its social welfare needs. As a city in a larger Alameda county it does not even control many big expenditures.

Schaaf has done a tremendous job generating new revenue for Oakland. The city’s  Schaaf-backed development boom will increase the city’s coffers once projects are completed.

But although this new revenue stream has not yet come, people hearing about all the development assume the city is rolling in money. This leads to blaming Schaaf  for not spending money the city does not have.

Schaaf announced on June 15 that the city would spend $185 million in the next two years on battling homelessness. That’s a twelve-fold increase. Yet this huge step forward was eclipsed by complaints about police spending and other issues.

Problems of Her Making: Live-Work

Schaaf has caused problems for herself by delivering mixed messages on artist live-work.

After last December’s Ghost Ship fire, concern was that the tragic death of 36 people would be followed by the mass eviction of artists living in warehouses. Schaaf made it clear she did not want that to occur. In January 2017 she supported Councilmember Rebecca Kaplan’s emergency ordinance to protect warehouse tenants from displacement. Jonah Strauss of the Oakland Warehouse Coalition described the city’s move as “a good start.”

Schaaf followed this with an Executive Order to bring warehouses into compliance with city codes. Schaaf stated, “We must take additional steps to protect physical, cultural and artistic assets and workspaces in the community.”

So far so good. Schaaf had faced a tough balancing act on the warehouse issue. She was exercising the leadership appreciated by everyone caring about the future of live-work warehouses.

But then things went south.

In February, residents of Oakland’s Salt Lick warehouse were evicted by the owner. Tenants claimed it “flied in the face” from what they had heard from the city.

In March, the East Bay Times reported, “Evictions from live/work spaces in Oakland continue with alarming frequency in the wake of December’s Ghost Ship fire, despite efforts by city leaders to work with landlords to prevent displacement in a city where affordable housing is a rare commodity. ‘We are facing evictions weekly. The number of spaces out there that are untouched are decreasing,’ said Tom Dolan, an architect and author of Oakland’s regulations governing warehouse conversions into legal live/work spaces.”

Schaaf’s plan to bring together owners, the city and artists for win-win solutions was unraveling. And that was before the recent criminal prosecution of the Ghost Ship’s master tenant.

For those cheering that indictment, it had a downside. Every owner of a warehouse that was not up to code now felt compelled to evict or risk future criminal prosecution for allowing people to live on the premises.

Schaaf ran into problems because the city could not legally stop landlords from evicting tenants living in warehouses. Artists  now blame her for reneging on city promises to protect them.

Schaaf should have publicly aligned with artists and attacked city inspection agencies and owners for not working to keep Oakland residents housed. Criticizing city agencies may sound unorthodox, but that’s what Jerry Brown would have done and the public likes it.

Schaaf took public responsibility yesterday for not effectively handling the ongoing sex scandals at the Oakland Police Department. Clearly, the short tenures of multiple chiefs reflect questionable hiring. But most Oaklanders are more concerned with crime, violence and the OPD’s performance on both than they are on sex scandals.

Schaaf’s core problem is that she lacks the strong-mayor authority that Ed Lee exercises in San Francisco. Lee can assemble fire, DBI, DPW and other agencies into a coordinated response around warehouses or other issues, and none of these agencies would dream of going against the mayor’s plans.

Oakland mayors cannot count on city agencies to back them. Jerry Brown controlled Oakland’s bureaucracy because he intimidated people with his background; Schaaf lacks this ability, which explains why we see Oakland inspection agencies freelancing independently of the mayor.

Schaaf must overcome the institutional limits of her position. The best approach is for her to effectively mobilize support from her still strong and broad base. The business community in particular needs to help Schaaf get city agencies working for Oakland’s interest rather than their own narrow needs.

Mayor Schaaf  can overcome this turbulence. Oakland’s future will be brighter once she does.