Robert Scheer Was the Ned Lamont of the 1960’s 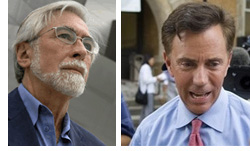 Robert Scheer’s August 23 syndicated column, “Warring Over the Heart of the Party,” states that the “fight within the Democratic Party over the Iraq war is as important as it is real.” Scheer is uniquely qualified to render this analysis. In 1966, young journalist Bob Scheer mounted a Democratic primary challenge to incumbent Berkeley/Oakland Congressmember Jeffrey Cohelan, which was based on Cohelan’s support for the Vietnam War. Scheer’s primary insurgency was attacked as a “leftist wrecking crew,” and sent shockwaves across the nation. The Johnson Adminstration and Democratic Senators and Congressmembers rushed to defend the pro-war Cohelan. Running on a campaign platform of “A Vote for Scheer is a Vote Against the War,” the now veteran journalist lost the battle but won the war. In 1970, Cohelan was replaced with a young anti-war activist named Ron Dellums, and two years later Democrats made George McGovern their presidential nominee on the same platform —Bring the Troops Home Now—that brought Lamont victory. Will history repeat itself?

Longtime columnist Bob Scheer is apparently too modest to note his own important role in the history of the anti- Vietnam war movement. But his 1966 Congressional campaign should be the stuff of legend, and the news clippings, facts etc were fortunately compiled in an out-of-print book, The Scheer Campaign, authored by his campaign treasurer, Serge Lang.

Cohelan even promoted his alleged endorsement by Martin Luther King, Jr, requiring the Scheer campaign to get a letter from the civil right’s leader’s representative denying the endorsement.

Cohelan was nowhere near as conservative as Lieberman. Scheer’s target had a 95% ADA rating, and was widely described as a “liberal.”

But, just as the Iraq War was the central concern of Connecticut Democrats, Berkeley/Oakland voters were primarily concerned with Vietnam. And as with Lieberman, Cohelan remained steadfastly loyal to the President’s pro-war policies.

While Lieberman and his media allies portray Lamont as serving the agenda of Al Qaeda, the newspapers of the time linked Scheer with communists. In its endorsement of Cohelan, the Hearst-owned San Francisco Examiner noted, “several of his (Scheer’s) campaign workers are closely associated with the Communist Party.”

While powerful San Francisco Congressmember Phil Burton might have been expected to stand up to the status quo and back Scheer, Cohelan was his brother-in-law. Nevertheless, Cohelan outraged Burton when he broke his promise to support Alameda Country Judge Cecil Poole to become the first African-American federal judge in Northern California.

Cohelan’s action, and his response to questions about his lack of support for Poole—“Cecil is a good man. He will have to wait his turn”—created an uproar in the San Francisco Bay Area’s black community. “Jeffrey Cohelan Sells Out Negroes” trumpeted the Sun Reporter newspaper, which was the Bay Area’s most read black newspaper. The Sun Reporter quoted Terry Francois, San Francisco’s only black Supervisor, as saying that Cohelan “has forfeited all claims of being a liberal. No self-respecting Negro should support his candidacy for re-election.”

Just as Lamont also criticized Lieberman’s record on health care and other issues, Scheer’s progressive critique of Cohelan was comprehensive. Cohelan refused to support Cesar Chavez and the farmworkers’ strike in Delano, co-sponsored a bill to build dams in the Grand Canyon, and supported funding the House Un-American Activities Committee, whose only role was engaging in political witch-hunts against the left.

But the heart of Scheer’s campaign was Cohelan’s vote “in favor of every authorization and resolution in support of the brutal war in Vietnam.” Like Lieberman, he stood by a President who attacked war critics for weakness, and saw “no alternative” to America’s current course of action.

On election night, Bill Moyers, then an assistant to President Johnson, called the Alameda County Clerk three times to check on results. Cohelan prevailed, but Scheer had ignited a movement that has kept the Berkeley-Oakland congressional seat in the hands of fierce anti-war activists Ron Dellums and Barbara Lee for nearly forty years.

The most disturbing aspect of Scheer’s campaign is that his push for jobs for the unemployed, more low-cost housing, an end to police brutality, quality education for blacks, and action to halt “run-away shops” from moving to areas of cheap non-union labor—remains an agenda that America has still not fulfilled.

And when people like Ned Lamont support such positions, and remind Americans of the insanity of the war in Iraq, like Scheer in 1966 their loyalty is questioned and their character attacked.