Robert Anbian’s “We3” Comes to the Madrone Lounge 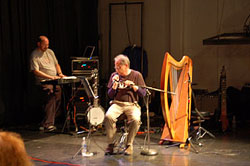 This Wednesday night, September 6th, San Francisco poet and writer Robert Anbian, and myself, will bring Anbian’s political and thought provoking poetry, with electronics, jazz and the music of my invention, the “Drummstick” to the Madrone Lounge, Divisadero and Fell Streets. Also performing with us will be legendary Bay Area musicians, saxophonist Charles Unger, and keyboardist Sam Peebles.

Anbian’s critically acclaimed “We” series, and his “Bush Hiaku” from writer Gene Stone’s best selling anthologies, the “Bush Survival Bible”, and subsequent “Cheney Survival Bible”, will be put to the music of Bobby Hutcherson, Miles Davis, and Thelonius Monk, among others, and performed electronically by Unger, Peebles and myself, in a debut of our self described group, “UFQ”, the Unidentified Flying Quartet.

Anbian’s “We” series, have been hailed as a “psycho-social poem-object of the contemporary world,” and “A passionate virtuoso steeped in these times and deep with tradition — hiply linguistic turns of natural originality, rhythmically brimming with a tempestuous taste of ecstasy, reason, and love.” — Oxygen. “Anbian is a raw mixture of poet, preacher, seer and rebel…(his) poems are unlike anything else on the market.” — Choice.

Anbian and I have been long time friends, and following the success of our July show at CounterPULSE, we decided to continue the project, with Unger and Peebles. The idea of putting Anbian’s writings and poems to the music of Miles Davis and others, had sprung from some of the 1990 recordings of the late William S. Burroughs, John Giorno and Laurie Anderson. Burroughs had successfully added the music of jazz fusion greats like Weather Report, Return to Forever, and Billy Cobham, to his poems and works, and Giorno took it one step further by adding a live band, which would add the complex vamps of the Mahavishnu Orchestra, or the punk rock grooves of Fugazi.

Laurie Anderson’s use of voice enhancing electronics was another motif both Anbian and I had experienced in those heady NYC/DC days of the 1980s and ’90s. I was no stranger to the use of that technology, a skill honed from my years of work with the pop diva, Madonna. After remembering those performances during one of Anbian’s legendary Christmas parties, we thought, “Hey, that’s some thing we could try!” Once Robert started reading, I noticed right away, that he had a kind of rhythm that would work nicely with jazz.

Charles Unger, Sam Peebles, and “Doc” Smith on his “Drummstick”

Unger and Peebles have been seen regularly at Haight Street’s Club Deluxe Tuesday Poetry Night, joining fellow Unger band mate Andy Marquetti, and sitting in with a host of local jazz artist and poets. After visiting with Unger one Tuesday night, I saw how well the mucisians played with the poets, and enlisted the legendary Unger and Peebles right away. My use of the guitar-like drum controller, the “Drummstick”, had been thrilling audiences for over a decade, and for this combo, I’ve even got jazz legends Unger and Peebles to dust off their respective electronic instruments, a MIDI saxophone and keyboards, which allow all three of us to play a variety of chords, melodies, samples and other-worldly sounds. The UFQ is a sort of an electronic Modern Jazz Quartet. We don’t know who may be in the group at any given time. It could be me, Unger, Peebles and even a laptop, or perhaps a guitar/synth player like John Moremen. We only know that it’s electric, fun and it’s got some elements of jazz.

Not unlike the “Beat” poets of the 1950s and their jazz counterparts of the past, Anbian’s “We3” with myself, Unger, Peebles and their “Unidentified Flying Quartet”, promises to be a very interesting show. A recently finished studio recording of this ensemble, as well as a live CD should be released this fall.

E. “Doc” Smith is a musician and recording engineer who has worked with the likes of Brian Eno, Madonna, Warren Zevon, Mickey Hart, Jimmy Cliff, Bill Bruford, and many others. He is also the inventor of the musical instrument, the Drummstick. He can be reached at edocsmith@comcast.net