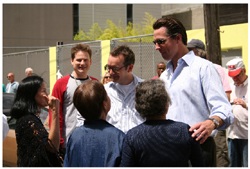 While I was cooking hotdogs at the SOMA Night Out last night Mr. Werner approached me and asked what I thought about his article. I said I was disappointed in his inaccurate reporting regarding the Mayor’s endorsement event. He said he had no idea what I was talking about, that he always checks his facts and that I must be mistaken.

Since I do not have a contact e-mail for Mr. Werner I am sending this e-mail to you. Please refer Mr. Werner to the attached photo. I believe he will find that the Mayor and I are speaking with the three lovely ladies Mr. Werner claims I ignored. I understand that there may be a particular perspective in Mr. Werner’s stories, but I trust you value honesty and accuracy in the articles on your website.

The Republican strategy of supporting Green Party candidates in order
to siphon votes from Democrats does not mean that the Green Party
candidate is in any way allied with the Republican candidate. This odd
strategy is merely a result of our defective winner-take-all system,
which is obsolete and not at all representative. If we had proportional
representation, like every other democracy except England, this
situation would not occur, and our government would be far more
representative.

This letter is to react to your texts “Osama Bin Laden Heading Toward Victory” on the Lebanese war. This conflict is the antithesis of humanism.

It is now evident that there is more in the Lebanese conflict than meet the eyes. No one can reasonably argue that there are more than 500 deaths because two Israelis soldiers were kidnapped. The Lebanese flattening is part of a bigger plan for both parties. On the Israeli side, it weakens a traditional enemy, killing their soldiers and destroying their ammunition. On Hezbollah sides, this is a well-planned fight. Going near Lebanese refuge, Hezbollah soldiers fire missiles at Israel territory. Radars’ pickup the traces left by the rockets. With precise weapons, soldiers swiftly shoot at the position identified. Buildings exploded burying innocents victims, mostly woman and child. Hezbollah public relation agents shout at Israel that kill Lebanese in fronts of world news reporters. Israeli soldiers point Hezbollah bloody tactics. That isn’t making to much difference because they are the ones throwing the bombs.

Hard to find who wins in this bloody orgy. Hezbollah suffer severe beating but receive regular flow of military help from undisclosed friends. Surprisingly, weapons are getting bigger and go farther. For its part, Israel is winning the war on the ground. It only suffers one-tenth of the victims. World leaders see the blood dripping from rubble and point fingers at the ones pulling the trigger. This conflict look like a boxing fight. Hezbollah, the swift tactician, is marking point at each round. Heavier Israel feels punches. When he hit back, it was judges who got the bloody nose. It isn’t too much good for the score. Israel knows he should win by knockouts. If this fights goes to the end the judges will declare Hezbollah the winner.

Who will come ahead in the Lebanese war? We will only know it in some months. Complex situations have too many variables to be easily predicted. One small event can drive the situation in unknown territories. It is not the same thing for the losers. Everyone’s can easily identify them. They get out of rubbles with the dead body of their kids crushed in their cold hands. They are innocents victims. Lebanese have been tricked, murdered and called collateral damages. Lets call them prime witness of our inhumanity. History got its own way to show how ridicule can be pretentious warriors. With time, enemies become friends and death, errors to forget. Remember Libya? There is one thing Lebanese war will have proved. Human lives worth nothing if we do not agrees to give it a price. This conflict is the antithesis of humanism.