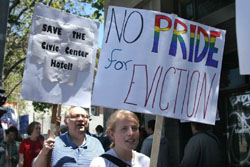 District 6 has the largest tenant population in the City, and Supervisor Chris Daly has established his bona fides over the last six years as one of the most pro-tenant voices at City Hall. So if Daly’s challenger, Rob Black, is going to run a credible campaign against him this November, he’s got his work cut out for him – and as it appears, Black has a problematic record on tenants’ rights. At this week’s meeting of the San Francisco Young Democrats, Black came out against Proposition H, which would increase relocation assistance for vulnerable tenants who have been evicted due to no fault of their own. His reason? He opposes placing propositions on the ballot without a public hearing. But that didn’t stop everyone from Supervisor Bevan Dufty to the Alice B Toklas Democratic Club from endorsing Prop H — and it puts Black in the company of Republican Mike Denunzio (who penned the official ballot argument against it.)

Nevertheless, Black appears to have at least gained the support of one large “player” in District 6 battles – Local 38 of the Plumbers Union. Today, the Plumbers Hall at 1621 Market Street features a large, prominent “Rob Black for Supervisor” in front of their main headquarters. How is the Plumbers Union a big player in District 6? They own the Civic Center Hotel, a 156-unit residential hotel of low-income tenants, and for over a year they threatened to demolish the building because they didn’t want to seismically retrofit it. It wasn’t until last August, when the Department of Building Inspection finally determined that no retrofit was necessary, that the tenants were saved from displacement.

By opposing a pro-tenant ballot measure and receiving the support of a landlord who tried to evict 156 low-income tenants in District 6, Rob Black doesn’t seem to be off to a very good start.