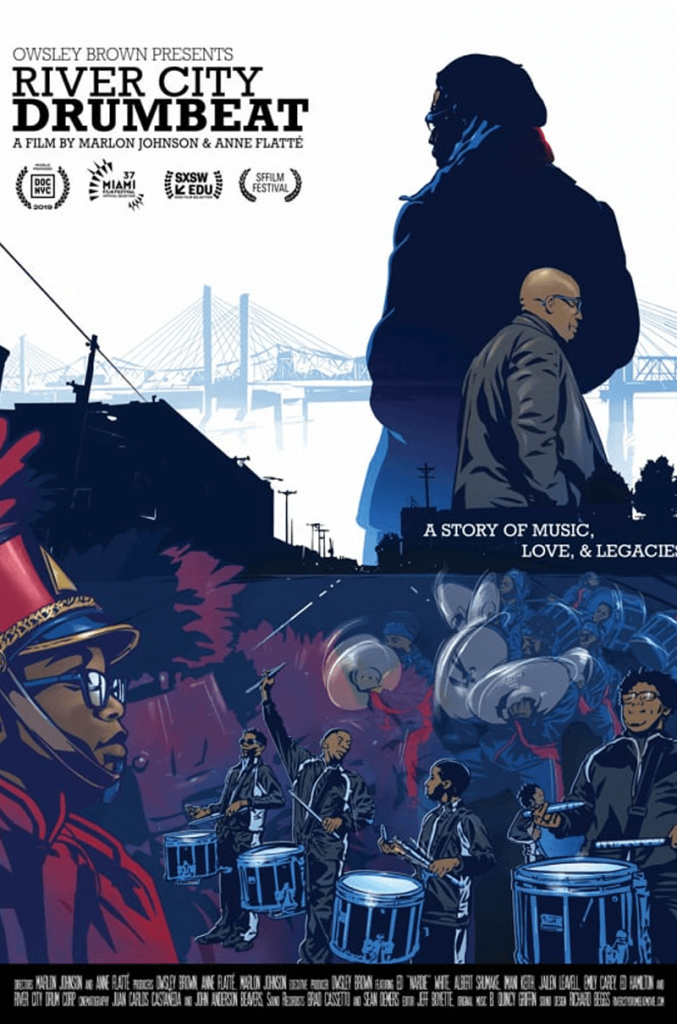 It can’t be said often enough that being able to consume the products of a different peoples’ culture is a far cry from being able to understand the people that created the cultural product being enjoyed.  In more concrete terms, liking lamb biryani doesn’t automatically make you an expert on Indian culture.

In the case of Marlon Johnson and Anne Flatte’s new documentary “River City Drumbeat,” appreciating the performances of the River City Drum Corps doesn’t mean the listener/viewer necessarily appreciates the music’s significance to its performers or audiences.  Johnson and Flatte’s film does an admirable job of filling in such knowledge gaps.

That sense of understanding begins with the African proverb which opens the film.  The proverb says “We desire to bequeath two things to our children: the first one is roots, the other is wings.”  “River City Drumbeat” shows how both goals are put into practice by the Drum Corps.

This musical organization operates out of the western part of Louisville, Kentucky.  Aerial and ground level shots of the West Louisville area shows the viewer that this part of town is an impoverished residential area.   The economic divide becomes more visually acute when the gleaming towers of the city’s more prosperous parts can be seen.  The band’s name comes from the river that’s a major geographical feature of Louisville.

Edward “Nardie” White, co-founder of the Drum Corps, didn’t initially dream he’d be the head of such an organization.  He grew up in a time and place where involvement in the arts was not considered something that black people did.  Yet athletics held little appeal for him.  Wife and eventual Drum Corps co-founder Zambia Nkrumah sparked the idea for the group by getting Nardie interested in African culture.  Inspired, Nardie looked for a way to introduce African culture to the next generation.  The answer was to teach interested neighborhood kids African drumming.

However, saying the Drum Corps exists only to teach its young charges how to play a musical instrument does the organization a severe disservice.  As former Drum Corps member Albert Shumake recalls, Nardie instilled in his students an awareness and appreciation for both their African heritage and how Blacks have contributed to American society.  Equally importantly, life skills also get taught via Drum Corps.

Johnson and Flatte show that these claims are not exaggerations.  The pipe drums used in the African drumming classes are made and designed from scratch by the students in the class.  High school student Imani V. Keith got encouraged by Nardie to step up and take a leadership role in the Drum Corps.  But one of the film’s more empowering moments comes from showing why the claim “we are all drummers” is not an exaggeration once a person becomes aware of the rhythm of their heartbeat.

Seeing that ethos of empowerment in action in the River City organization makes “River City Drumbeat” different from other art-themed documentaries.  The joy of making art is not the end-all and be-all of Johnson and Flatte’s film.  While there are excerpts from various drum teams’ performances, the snippets last long enough to give a feeling for the music’s flavor.  If the sometimes thunderous results could be characterized as anything, it would be as the musical version of the famous “I Am Somebody” shout.  The behind the scenes footage of the various drumming classes put on by the River City Corps shows that drumming as one is not a skill a child is born with, but is something learned with practice and increased confidence.

One notable choice by Johnson and Flatte is their decision to not use on screen titles to identify their film’s central subjects.  Helping the viewer understand who’s who by using such identifiers may seem de rigeur for documentaries.  Yet such titles can also have the effect of creating emotional distance between the viewer and the Drum Corps members.  For a film working to immerse the viewer in the lives of Nardie and the other group members, this would be a mistake.  Some viewers’ othering tendencies are already triggered by the reality that Nardie and the Drum Corps members profiled are Black.  Removing the identifiers compels the viewer to learn to identify the film’s central subjects by individual look and background.  Albert and Jailen, for example, may both be youngish black males.  But one is a 30-ish father who’s Nardie’s successor while the other is a high school student who initially tried pursuing both athletics and drum corps.

Understanding Nardie, Albert, Jailen, and the other subjects as individuals is key to understanding that “River City Drumbeat” is at its core a chronicle of passages and how Nardie and the others are affected by them.  Imani and Jailen, for example, are graduating high school and face the possibility of life without Drum Corps.  Albert wants to pay forward the benefits of being a Drum Corps member yet is aware he’s filling Nardie’s very big shoes.  Nardie feels both his age and the appeal of taking up an abandoned artistic dream.

Just because there’s no obvious conflict in “River City Drumbeat” doesn’t mean there is no struggle for the people followed by Johnson and Flatte.  Louisville’s historic involvement in the slave trade still casts its long shadow over the present.  The economic slavery of low wage work has its own form of emotional brutality.  A teacher’s flat assessment that a student will never amount to anything feels like an attempt at abruptly closing off the student’s future.  If the metaphor of roses growing out of concrete resonates with “River City Drumbeat”’s students, it’s because the image captures their attempts to live beautiful lives despite social and historical obstacles.

Albert’s back story in particular demonstrates that transcending such difficult life situations is not impossible.  His parents were both drug addicts.  Albert himself went to six different schools before he completed elementary school.  Fortunately, his mother understood that Nardie and Zambia offered her son an opportunity for a life not overshadowed by her own poor life choices.

“River City Drumbeat” avoids stating the naive proposition that if more Black children learned African drumming, then the social problems that plague America’s Black communities would eventually disappear.  Nardie’s pained recounting of his granddaughter’s embrace of the gang lifestyle offers a sobering reminder there probably isn’t a one-size-fits-all way to give Black children roots and wings.

But for the many young students who’ve successfully gone through the Drum Corps program, their powerful public performances demonstrate both their increased sense of groundedness in the world and their awakened awareness of their own possibilities.  The performances could be called musical declarations of gratitude for the support their community has given them.

Without resorting to polemical didactics, Johnson and Flatte have brought to these culturally dark times a stirring tale of political and cultural advancement.  Kudos also go to the Kenneth Rainin Foundation and SFFILM for providing much needed financial support to help  “River City Drumbeat” reach completion.

(“River City Drumbeat” is now available at the Roxie Virtual Cinema and will be available via the Smith Rafael Virtual Film Center as of August 14.)