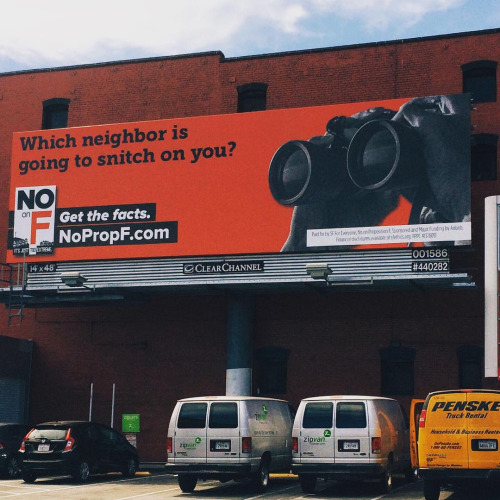 San Francisco’s November 3 election is two weeks away and tensions are already boiling over. This is most evident in the two most high profile races: the District 3 contest between Julie Christensen and Aaron Peskin and Prop F, which increases regulation of short-term rentals. Prop I, the Mission moratorium on market rate housing, has generated less heat, which may have led opponents to unveil a new campaign strategy last week.

A War on Peskin

Personal attacks on Aaron Peskin have escalated. They go beyond the familiar stories about late night drunken phone calls and charges that he was rude to city officials while on the Board. Now, Peskin is a “Nimby Landlord and womanizer.” One attack even implicated Peskin’s parents in his alleged wrongdoing.

Knight’s story humanized Peskin. And even worse from opponents’ perspective,  Knight quoted former Peskin adversary Michela Alioto-Pier —a person he once yelled at–on why she’s backing him in this race. Alioto-Pier and former City Attorney Louise Renne are politically moderate women of the type Peskin’s opponents’ say he can’t get along with—thanks to the Chronicle,  D3 voters now know that both women have endorsed him.

Adding to the frustration of Peskin haters was the San Francisco Apartment Association’s decision to endorse him.  This undermines claims that Peskin is an enemy of private property, and instead sends a message that a guy portrayed as a flamethrower who can’t work with those on the other side actually works with adversaries quite well.

Many of the landlord and developer interests that Peskin is charged with seeking to destroy are either supporting him or staying neutral. No wonder Peskin opponents are raising their level of personal attacks. They feel that Peskin is selling a false political identity in this race, and that it is up to them to raise the decibel level so thattheir charges penetrate voters’ minds.

Despite the strident mailings, signs and television ads, absentee voter turnout in D3 remains extremely low. This is not good news for the Peskin camp, which has recognized from the start that they cannot lose big on absentee votes and make it up with Election Day turnout.

I recently wrote that Peskin can win with a low turnout, as many of his supporters are consistent voters who came out in droves for the off-year 8 Washington campaign. But for those on the ground attending campaign events, making phone calls, and knocking on doors, the lack of voter response can be discouraging.

It’s also disappointing that an election that many see as so vital to the city’s future is being ignored by most voters. Sad as this is for those of us who take politics seriously, 2015 proves again that unless there is a competitive mayor’s race to drive turnout, most San Francisco voters are simply not interested in local elections.

There is also rising anger at the massive $8 million advertising campaign by the Airbnb-led No on F campaign. Yes on F supporters see their opponents as running a campaign based on lies, or, as SF Examiner columnist Nato Green puts it, “Airbnb has matured briskly into the Caligula stage of imperial excess. Now we know how drug kingpins would behave if heroin were legalized.”

I always enjoy the richness of Green’s prose, but here’s what I don’t understand. Did Prop F backers expect Airbnb to not spend lavishly to defeat the initiative? Are they surprised that No on F is targeting a minor provision in the law (the private right of action) in order to defeat it?

Ballot measures aren’t fun and games. They are often about power and money. And if you are going to take on a short-term rental industry that has brilliantly framed its profit-making agenda as part of a “Sharing Economy,” then you cannot be surprised when its marketing prowess is used to defeat a ballot measure that threatens it.

I’m not surprised by the No on F campaign. I wrote last May, “I can already see the No side’s campaign literature. It will tell the story of a single woman with kids who rents out rooms in their apartment to keep a roof over their family’s head. Voters will hear from people with AIDS, seniors, working people holding two jobs, and others for whom short-term rental income has been a lifesaver.”

Prop F violated the cardinal rule for winning progressive ballot measures: Keep it Simple. As I also wrote, “Multi-provisioned initiatives are easier to defeat because opponents only have to get voters to oppose one part to justify a no vote.”

No on F’s focus on spying neighbors parallels my discussion in The Activist’s Handbook of how opponents of a school voucher measure on California’s 1993 ballot zeroed in on a small provision that allowed public financing for schools operated by witches. Progressives used this strategy in that case, and it worked.

We’ll never know if Prop F could have won by limiting its text to a single provision limiting short-term rentals to 75 days. But even $8 million would have had trouble confusing voters on that simple measure.

Prop I, the Mission market rate housing moratorium, has been somewhat eclipsed by to the massive No on F advertising blitz. This may explain why the Yes on I campaign tried to make news last week by releasing a “framework” for the “Mission Stabilization Plan” that Prop I requires by January 2017.

Putting aside the Plan’s details, here’s what I don’t understand. Instead of going to the ballot with a specific program—such as raising inclusionary housing mandates in the Mission to 33% or mandating a level of city spending on affordable units in the neighborhood— Prop I backers asked voters to impose an 18-month “pause” on development. 18 months were allegedly needed to carry out a full community process to create the Plan.

But by releasing a “framework,” Prop I backers seem to have already decided what they want in the Plan. While it is not binding should Prop I pass, it certainly raises questions whether the 18-month “pause” imposed by the initiative is necessary.

I was told that Prop I backers released the framework because voters were asking for more specifics about the Plan. That’s understandable. It says to me that voters are unclear on a central component of Prop I, which would not have been the case had the measure directly increased affordable housing in the Mission.

Releasing the potential details of the Plan also gives opponents a fresh target. New mailings from the No on I campaign attacking these details are likely already in the works.