“The Rise And Fall Of The Brown Buffalo”—Review 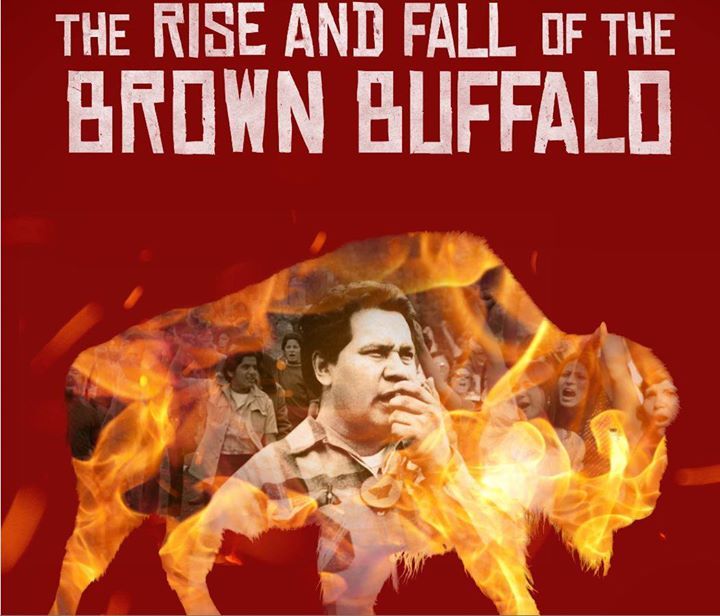 Samoa had nothing to do with the ethnic background of the real man countercultural types remembered as Dr. Gonzo.  The man that writer Hunter S. Thompson immortalized in “Fear And Loathing In Las Vegas” was actually a Chicano rights activist named Oscar “Zeta” Acosta.  Director Phillip Rodriguez tells Acosta’s forgotten but complicated story in the documentary “The Rise And Fall Of The Brown Buffalo.”  Executive producing the film is Benicio del Toro, who played Dr. Gonzo in Terry Gilliam’s hallucinogenic film adaptation of Thompson’s book.

Rodriguez primarily relies on dramatizations to tell Acosta’s life story.  From a filmmaking perspective, this tactic makes sense as many of the principals are probably dead or else footage of crucial incidents would not be available.  Acosta was hardly likely to have kept film of his burning a judge’s lawn.

But Rodriguez’ dramatizations also make sense from an aesthetic viewpoint.  Doing the traditional talking heads interview mixed together with period footage and some animation would not have done justice to its very unconventional subject.  This was a man who once ran for Los Angeles County Sheriff on a platform of eliminating the Sheriff’s Department.  Had this and other incidents been told in a straightforward manner, the average viewer might reasonably assume the film was filled with obvious exaggerations.  Yet hearing actor Jesse Celedon speak Acosta’s words makes the Chicano activist’s unwinnable campaign possess a crazy twisted sense.

For Acosta, playing by the rules meant allowing himself to be subjected to racist self-segregation in the classroom.  It also meant pretending the piece of paper that gave him his J.D. proved he was qualified to be a lawyer.  In reality, the school in question gave Acosta a legal education whose only value was permitting him to be an officer of the court.  Mid-20th century American societal rules also preferred its Latinx (and other minority) populations in a maximally marginalized state.  Acosta wound up becoming a man with little sense of a strong personal identity.

The Chicano rights movement provided the spark needed for Acosta to remake himself into an activist for people who looked like him.  Ironically, it would be that worthless J.D. that gave him a point of entry into the movement.  Where the activists he represented were fighting outside society’s legal bounds, Acosta inventively attacked a racist system arrogating to itself the ability to judge his clients.

Frequent period news footage shows the Brown Buffalo (as Acosta nicknamed himself) could be very articulate and forceful in speaking for the movement outside the community.  The skills developed trying to spread the word of God to Panama’s Indian population proved very helpful in the Brown Buffalo’s activities inside and outside the courtroom.

If Acosta dazzled the public, his life outside the news cameras’ gaze turned out to be a lot less golden.  Schizophrenia and depression plagued him throughout his life.  His wives wound up being the financial pillar of their respective marriages.   Even his fellow activists often wondered whose death entitled Acosta to claim the Chicano rights movement’s leadership crown.

A shared taste for drinking, taking drugs to excess, and displaying wild and crazy behavior explains why Acosta would become friends with Thompson.   Hanging with the gonzo Rolling Stone journalist provided Acosta a chance to mentally recharge his batteries.  But even if Thompson wasn’t swept up in the political fervor embraced by his friend, at least the journalist brought to a national audience the suspicious homicide by cop killing of famed Chicano reporter Ruben Salazar.  Ironically, it would be Thompson’s Salazar article that would lead to Acosta’s being renounced by the Chicano activist crowd known as the Vatos Locos.

In a further cruel irony, the Las Vegas trip that immortalized Acosta would also eventually lead to the destruction of the activist’s friendship with Thompson.  The end of that friendship resulted from a self-inflicted emotional wound on Acosta’s part.  Any benefit he might have hoped for from finally realizing his dreams of becoming a writer wound up being poor compensation for losing not only his brotherhood with the legendary gonzo journalist but also whatever stability he had left in his home life.  It’s open to speculation whether Acosta’s disappearance in 1974 counts as tragedy or a last bit of face-saving.

Rodriguez’ film leaves judgment of the Brown Buffalo’s life and works to the viewer.  Acosta certainly deserves plaudits for exposing the legal system’s racism.  Yet can an activist be called truly effective if his works are forgotten and another’s caricature of him achieved immortality?