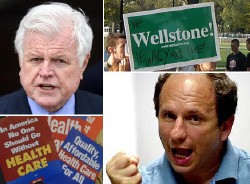 In 2002, Paul Wellstone died in a plane crash in the heat of a tough re-election battle. Last week, Ted Kennedy passed away while the nation is mired in the fight for universal health care – which was the “passion” of his life. Paul was George Bush’s most outspoken critic in Congress, and his death generated a mass outpouring of grief that scared the Republican Party. In a disgusting display of rank opportunism, they attacked the Wellstone Memorial Service for being too “partisan.” Now, Kennedy’s death has galvanized progressives to fight for universal health care – and once again, the G.O.P. is terrified. So the right wing has sunk to a new low by making “Wellstone” a profanity – as they complain that a “Wellstone effect” is politicizing Kennedy’s death. It’s a cynical ploy that they hope will turn the public against health care reform, just like their faux outrage at Paul’s funeral gave Republicans a boost on Election Day. It is also deeply hypocritical, considering how they covered Ronald Reagan’s funeral. And as one who had the privilege of knowing Paul Wellstone, it is unbelievably offensive.

Paul Wellstone and Ted Kennedy took on political causes because they were passionate about helping people. Paul had worked for too many years with poor people to throw them under a bus by voting for Welfare Repeal, even if it meant risking his political career. Kennedy grew up in a wealthy family, but he felt the plight of parents who couldn’t pay for a kid’s surgery because the health insurance wouldn’t cover it. To them, politics was not a game – it affected the lives of real people. And it’s why the likes of Rush Limbaugh, Sean Hannity and cynical operatives like Karl Rove or Dick Cheney could never comprehend the outpouring of grief when they both died.

Both passed away at a crucial time when they were needed the most. Paul was on the verge of being re-elected, as the Bush White House was hell-bent on milking the tragedies of September 11th to conduct a pre-emptive unilateral invasion of Iraq. His last speech on the Senate floor was in opposition to the War, and it was the last vote he cast. While Ted Kennedy spent his final months battling brain cancer, the U.S. Senate was mired in a fractious health care debate – with Republicans determined to make it President Obama’s “Waterloo,” and conservative Democrats like Max Baucus doing the bidding for the insurance industry. Kennedy’s death means we now have one less guaranteed vote.

It is this grief that prompted over 20,000 people to gather in the Williams Arena five days after Paul’s death – and cheer to the rallying cry that they will “win this election for Paul Wellstone.” It’s the same grief that prompted me, hours after Kennedy’s death, to launch a Facebook group naming the “public option” part of the health care bill after Ted Kennedy – which continues to get hundreds of new members each day. Anyone who loved, admired and respected these two Senators understood that their legacy was all about politics – and the best way to honor their life is to “stand up, keep fighting” for what they believed in.

Conservatives are afraid of that grief because it is real, because it is powerful and because if channeled effectively can galvanize the Left to change this country. Republicans may have generated enough “outrage” over the Wellstone Memorial Service to win the 2002 election, but within less than six months Howard Dean was talking about representing the “Democratic wing of the Democratic Party” – and channeling that anger and grief into something productive. Right now, Ted Kennedy’s death can easily be channeled to pass strong health care reform that could reduce the Republican Party to a permanent minority.

I never knew or met Ted Kennedy, but I knew Paul Wellstone – and his death was the worst day of my life. The right wing’s attacks on his Memorial Service (much of which turned out to be fabricated) was painful, but seeing Democrats apologize for the funeral – and blame themselves for the Election Results – was even worse. In a way, I felt like I never had a real opportunity to grieve his death. My heart goes out to those who knew and loved Ted Kennedy right now, because they deserve to not have their grief ripped away from them like that.

The same right-wing pundits who moan that liberals are politicizing Ted Kennedy’s death had no problem doing the same thing when Ronald Reagan died in 2004. “No one wants to politicize the death of a recent president,” said Wiliam Kristol on Fox News Sunday. “But you know what? The Bush campaign should.” Rush Limbaugh went so far as to use Ronald Reagan’s death as justification for George Bush “staying the course” on Iraq. Reagan’s casket was broadcast on C-SPAN over and over again, while those of us who despise the Reagan legacy tried to avoid the nauseating spectacle.

But that’s okay. Conservatives are entitled to their political heroes, and if they have core principles should celebrate their leaders’ deaths the way he or she would have wanted them to do. Just don’t attack us for remembering our heroes – depriving us of our chance to grieve. And don’t you dare smear what we do, when we’re just fighting to keep their legacy alive. Ted Kennedy wanted universal health care, and we will make it happen.