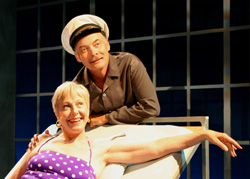 THE RIDE DOWN MOUNT MORGAN

Lyman, the central character in Arthur Miller’s play is a self-absorbed, narcisstic man who is in a hospital bed going in and out of conscious as he recalls his life after an automobile accident. Or was it accidental? Among the things he remembers is when he was talking to his Lawyer about having two wife’s that don’t know that they are married to the same man. “I Love her too, but our neuroses just don’t match.” Says Lyman.

Lyman is a guy that never takes responsibility. He just can’t help himself and always expects that he will be able to charm everyone to believe that he always has everyone’s best interest at heart. And you know what? I kinda believe in Lyman. Life is a treacherous road and sometimes it is easier to not tell people everything. Especially if you think that it might hurt them and keep you from getting killed, or worse…lose all your money.

But there he is in this hospital bed and his world comes unraveled when both of his wives show up at the hospital bed to see how he is doing. He has a son with the second wife and an older daughter with the first wife. This is where the comedy comes in. You root for all the characters as you try to control your laughter. There’s a lot of smart, funny and sad comedy here as each wife finds out that they are not the only Mrs. Felt.

Miller does, as usual open up a can of worms. Is monogamy out of date? Is it all right to deceive and be dishonest? None of this is really answered – but its left up to the individual to decide. There is plenty to mull over in this crackling play.

Victor Talmadge brings a frenetic charm and exhilarating acting to the role of Lyman Felt. He may be a cad, but Talmadge becomes a loveable cad. The hospital nurse Marjorie Crump Shears is really essential to the story. She is the bridge – she is the ‘camp’ and Shears does it with great gusto. Karen Grassle, who has extensive experience on TV and Stage, is Theo Felt, who is the first Mrs. Felt. Grassle is extraordinary and pitch-perfect. She is one of those rare actresses who don’t have to say much to be a big presence on the stage. With a look, a flick of a finger – you always get the picture. She’s wonderful.

From Sally Bowles in Cabaret in Concord to playing Bessie — Kristin Stokes is the daughter in this extended family. Stokes is stunning and talented and superb!

Nancy Carlin plays the other Mrs. Felt with just the right nuance of rage and understanding. Her performance is astonishingly real. You can see the pain behind her eyes.

Keith Burkland (The Lawyer) perhaps gives one of the most interesting performances. He must balance loyalty with law…and he does this with solicitousness and grace. Burkland is strong, moving and dignified.

This revival of ‘The Ride Down Mount Morgan’ as directed by Joy Carlin, has a radiance that shines on every word written by Arthur Miller in this High Beam production.

The Playhouse has done it again. The Evening was Hypnotic and devilishly funny!

THE GOD OF HELL

The way I see this Sam Shepard play is that it is open to interpretation. The story revolves around Frank and Emma who are dairy farmers. They live alone with their heifers in a remote section of the mid-west. They rarely see anyone except for a passing mail truck that they wave at from time to time.

One day everything changes. A strange man, who purports to be a salesman, arrives at the remote farm the day after a long-time friend of Frank’s arrives for a visit. His friend is staying in the basement. The man, who is dressed in a black suit, is sleazy and slick – the typical high-powered over-whelming door-to-door salesman. He carries a black attaché case and pulls out his wares. They are all patriotic stuff. Paper flags, banners, and hanging patriotic doo-dads. He pushes his way into the living room and even sits down at the kitchen table. Emma, being a little naive and probably starved for company asks him if he would like some bacon and coffee. He starts to interrogate Emma. Questioning her patriotism.

How many rooms do you have? How many bedrooms are there? Does anyone else live here? Emma begins to feel uneasy and asks the man to leave. He tells her that she needs more patriotic things in her house. But, does reluctantly leave. However, we haven’t seen the last of this spooky character.

Shepard describes the play as a take-off on Republican fascism. To be sure this is a clear indictment of the Bush Administration. Although no names are mentioned nor do we ever find out what agency the creepy agent is from (he refuses to give Emma his name and who he represents.)

Why has this little farm been targeted? Because, the friend that is staying in the basement is one of the governments mind experiments that has escaped their torture rooms. The agent finds him in the basement and rigs up some horrific torture. He has put an electrical device on the man’s penis and pushes a remote to exact excruciating pain. We see the pain in the actors face and we see the electrical sparks.

This is a story of the Patriot Act gone wild. The farmers can’t escape. The government turns Emma’s husband into one of their experiments. Their lives are shattered – all in the name of flag waving. At one point the evil agent gets into the home and staples flags all over the living room while Emma is out in the field looking for her now crazed husband.

Truly scary stuff…the play is only 75 minutes long – but the chill and the memory will last a lifetime. It is billed as a dark comedy. I would say that it is more dark than comic. Be sure to check out your basement before you go to bed.

Lucky us…this production is blessed with a cast that is firing on all cylinders. Anne Darragh plays ‘Emma’ and brings to the role just the right amount of despair and determination. Then there is the devoted farmer husband “Frank” played by John Flanagan who turns in a solid as a rock performance of the highest order. Michael Santo is Welch a government agent posing as a Sales person. Santo is so good that he frightens the hell of you. Then there is Mr. Haynes – portrayed by Jackson Davies who delivers one of the most passionate performances you are likely to see in any play. ‘Heartbreaking’ would be a good word to use here.

…And thanks to Amy Glazer, the Director, for giving this production such masterful oomph and buzz.

RATING: FOUR GLASSES OF CHAMPAGNE!!!!
At the Magic Theatre.

Way back when: There was a great deal of tension during rehearsals of the Broadway production of Neil Simon’s “The Odd Couple” between the director Mike Nichols and one of the stars, Walter Matthau. At one particular rehearsal, Nichols was ridiculing and belittling Matthau’s efforts in a particularly abusive manner, so the actor stopped and said:
“Okay, Mike, can I have my balls back?”
“Certainly,” said Nichols and snapped his fingers “Props.”

They are not funny anymore: Chris Parnell, Horatio Sanz and Finesse Mitchell has been dumped from “Saturday Night Live”.

SEND YOUR FUNNIES TO: leehartgraveshow@yahoo.com