Richmond’s Park Ranger: Why Betty Reid Soskin Has “No Time To Waste” 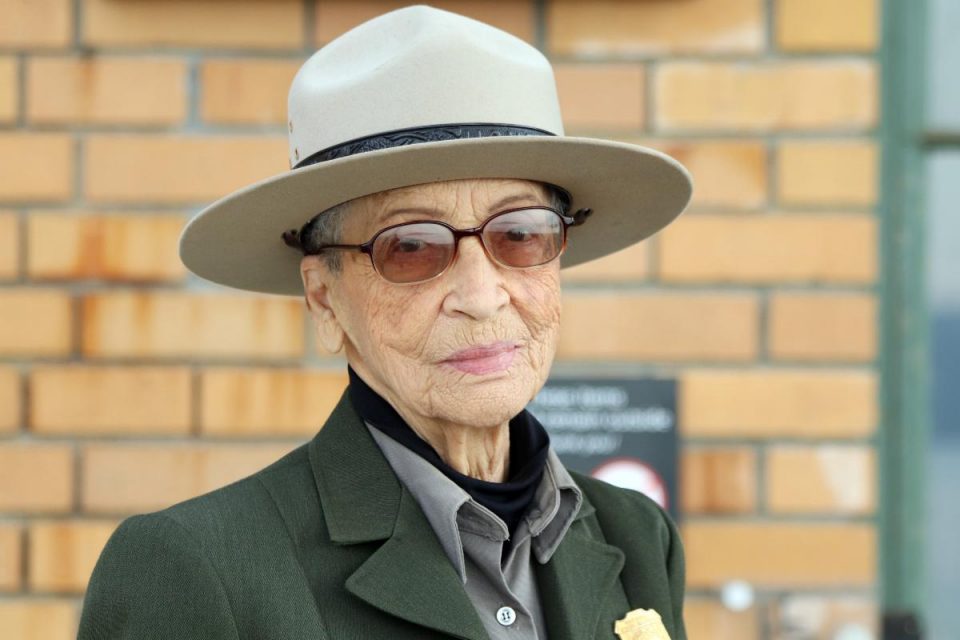 Richmond, CA.’s renaissance as a “progressive city” has thrust many of its leading personalities into the media spotlight in recent years.

But none of our local luminaries can match the singular popularity of 98-year old Betty Reid Soskin, whose life and work are now the subject of a new documentary called No Time To Waste.  It premieres on NBC Bay Area, this Saturday, July 4 at 7 P.M. (See trailer here– https://www.notimetowastefilm.com/)

Soskin joined the National Park Service 13 years ago and became the biggest attraction at Richmond’s Rosie the Riveter/WWII Home Front National Historical Park after she was furloughed, along with 800,000 other federal employees, during the government shut-down of 2013.

Rather than sit home and quietly wait for that Republican-engineered disruption to end, Soskin became a media sensation as the octogenarian in a Park Service uniform and Smokey the Bear hat who insisted on the urgency of her mission as a public educator about African-American history. As she explained to CNN’s Anderson Cooper, talk show host Arsenio Hall, the Associated Press, and others, she had “no time to waste” due to her advanced age and late start on the federal payroll.

In the new film of that name and her 2018 autobiography, Sign My Name to Freedom, Soskin tells the personal story that has drawn thousands of people, from the Bay Area and far beyond, to the site of Richmond’s World War II Kaiser shipyard.  After her family moved from New Orleans to Oakland, Soskin became one of the thousands of African-American workers who gained unprecedented job opportunities in Richmond during its ship-building hey-day.

Hired at age 19, she spent the war years doing clerical work in the Boilermaker’s union hall, keeping track of its huge influx of new members. After World War II, she became a suburban housewife and mother of four children. She got involved in the Democratic Party and served as a national convention delegate for presidential candidate George McGovern in 1972.

Soskin’s political activism eventually led to a job doing local constituent service work in Richmond for a California assembly member. In that capacity, she was invited to participate in the planning of what is now the visitors center dedicated to “Rosie the Riveter, the iconic bicep-flexing white female in blue overalls and red kerchief featured in a famous war-time propaganda poster.

The story of Richmond’s “Rosies,” who were hired for shipyard jobs when white male labor ran short, is the subject of a documentary film called Home Front Heroes, which is screened daily by the Park Service.  Using old newsreel footage and interviews with aging Kaiser workers, Heroes has a warm and fuzzy “greatest generation” feel. It celebrates “ordinary people doing extraordinary things”—ie knocking out merchant marine ships at record speed—while overcoming divisions based on race and gender, during what one Rosie in the film recalls as “a wonderful time of coming together” for the common good.

After Soskin moved from consulting on the project to serving as a Park Ranger, the World War II story telling of the Richmond Historical Park got grittier and more inclusive.  Soskin used audience discussions of Home Front Heroes to provide a counter-narrative to the film. She explained how African-Americans were originally hired at Kaiser only as “helpers and trainees”—with black men finally gaining access to other shipyard jobs in 1943 and black women the following the year.  Richmond’s waterfront army of new welders was only fully integrated, out of necessity, in the final months of the war in 1944-45.

These gains owed much to A. Phillip Randolph, leader of the Pullman Car Porters’ Union, who used the threat of a civil rights march on Washington to win a federal ban on racial discrimination in hiring for defense industry jobs. As Soskin explains, this “Double V” campaign helped launch the modern civil rights movement” and put pressure on “Jim Crown unions” (like the one she worked for) to accept black members.  In Richmond, African-Americans were required to pay full dues to the Boilermakers Union. Yet they were denied full membership voting rights, couldn’t file grievances, and were consigned to a segregated “union auxiliary” of their own.

Soskin also informs her audiences about the hazards of war-time work by African-Americans in the Bay Area, even though they were far from the nearest battlefield. Many accidents, injuries, and even deaths occurred at Kaiser due to the relentless pace of ship-building. Among defense industry workers nationwide, there were more than 37,500 casualties.

In her history talks, Soskin recalls how she and her first husband, Mel Reid, went to a party in July, 1944 and met black seaman on day leave from Port Chicago, a naval ammunition station located along the Sacramento River Delta in Concord. Later that night, while segregated work crews were loading tons of munitions onto naval vessels bound for the Pacific, a huge explosion destroyed much of the facility, killing more the 320 people (200 of whom were black).

This disaster triggered a famous work stoppage in which surviving African- Americans balked at returning to work under the same hazardous conditions. Instead of addressing their safety concerns, white Navy officers court-martialed the protestors for mutiny, securing convictions against fifty men, who were sentenced to 8 to 15 years in the brig.

By the end of the war, twenty percent of the Richmond shipyard workforce of 100,000 was African-American. But no children of black workers were ever permitted to enroll in Kaiser’s day care center and public housing in the city remained strictly segregated.  Rank-and-file shipyard workers who had challenged the discriminatory practices of the Boilermakers Union later formed a Richmond branch of the NAACP. It soon became the civil rights organization’s most active West Coast affiliate and a persistent foe of post-war racial discrimination in housing and employment.

In her Richmond history talks and tours, Soskin has long fostered discussion about the past, present, and future of work—and the planet. Among the young listeners she has helped inspire are women of color in Richmond who get training for “non-traditional” jobs, in building construction, through the Rosie the Riveter Trust, a privately funded program. Other audience members have included Richmond police officers, assigned to attend her talks as part of their training in “Fair and Impartial Policing.”

Echoing Naomi Klein in her book This Changes Everything, Soskin frequently makes the point that current environmental challenges require emergency measures and creation of a public jobs program like those associated with World War II and the New Deal before it.  As Richmond’s Rosie museum illustrates, fossil fuel rationing, greater public transportation use, various forms of recycling, and nationwide “victory” gardening were embraced by millions of Americans as their contribution to winning the war against Nazi Germany and imperial Japan.

“What we do or fail to do about global warming and climate change is going to determine whether our grandchildren will inherit a livable climate,” she informs her visitor center audiences. “We met the threat of fascist world domination…but now this generation will have to exceed that mobilization, on an international scale, to save the planet.”

As always, there is good reason for Betty Reid Soskin’s compelling message that she—and we—have no time to waste in the continuing fight for racial justice, workplace rights, and environmental protection.

(Steve Early is a Richmond resident and author of Refinery Town: Big Oil, Big Money, and the Remaking of an American City, which profiles Betty Reid Soskin and other local figures. He can be reached at Lsupport@aol.com)