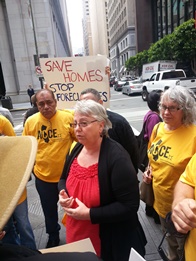 Despite periodic, sunny reports of increasing housing prices on the increase, the fallout of the mortgage crisis brought about more than five years ago largely through the big banks predatory and reckless behavior is still draining wealth from communities in our region, especially communities of color, at an alarming rate. Foreclosures and homeowners trapped in underwater mortgages cost families, their neighbors, and government billions, and none of the alphabet soup of programs and settlements has delivered sufficient relief.

So it’s no surprise that a hard hit city like Richmond California – where nearly half of the residents are “underwater” (owe more than their house is worth) has taken the biggest step forward in an innovative plan to take local action to address at least one slice of the problem.

Richmond, California and its progressive Mayor, Gayle McLaughlin, became the focus of widespread media attention and Wall Street’s ire in August when the City sent letters to servicers and investors asking to buy 600+ loans at their fair market value, in order to refinance them, with the help of private investors, into the new loans with positive equity. The program, Richmond CARES is designed to help homeowners and stabilize the city’s housing market. Richmond’s offer letter identified the independent firm the city and its private partner, Mortgage Resolution Partners, had used to generate its offer amount on the loans, and put servicers and trustees on notice that it was willing to use eminent domain if necessary to complete the purchases.

“One way to judge the virtues of the city of Richmond’s initiative to use eminent domain to help its strapped mortgage borrowers is by the hysterical reaction of the banks and investors holding the mortgage loans.”

Hiltzick does outline what he calls the “flapdoodle” spread by Wall Streets and its allies and the series of threats, legal attacks and political pressure unleashed by the main Wall Street lobbying group for big players in the secondary market, SIFMA, and banks like Wells Fargo and Deutsche Bank, which rather than negotiate over of the price of getting trouble loans for which they are the trustees of the hands of the investors they are supposed to represent, immediately sued Richmond (a hearing, in which the City of Richmond will ask to have the lawsuit dismissed is scheduled for this Thursday.)

The hysteria of Wall Street’s lobbyists is reflected -– in fact their talking points are repeated with extra venom –in yesterday’s column “Rhymes with snobbery” in the San Francisco Chronicle by Debra J. Saunders. She writes “There is no alarm system powerful enough to protect a humble homeowner from the giant maw of such a revenue-raking machine.” Saunders lifts up much of the deceptive and inaccurate messaging that local San Francisco Political consulting firm Barnes Mosher Whitehurst (BMW) was hired to create to try to kill Richmond CARES. Recently BMW won a deceptive messaging campaign funded by the soda companies to stop the Richmond Soda Tax from passing.

Saunders has been called out for playing fast and loose with the facts before in service of her far-right ideology. But the Chronicle itself is a player in the battle in Richmond, via its association with the West Contra Costa Association of Realtors (WCCAR).

The West Contra Costa Association of Realtors (WCCAR) which lists the San Francisco Chronicle as an affiliate on its website, has provided the public face for a well-financed Wall Street opposition campaign to the Richmond CARES program. Its campaign has been rooted in misinformation and scare tactics designed to blunt public support for the program. The Associations sent glossy mailers and put up a website that mischaracterizes the program as an attempt by “Wall Street” to take property or wealth away from Richmond homeowners, when, the opposite is true—the voluntary program would help keep people in their homes with new, lower mortgage balances and finally start to rebuild hard hit communities across the Bay.

Predictions that “credit will shrink” in Richmond or other cities that enact local principal reduction are not simple prognostications–to the extent they come from major lenders they are actually threats to engage in illegal discrimination and collusion—a threat that Richmond has stood up to with the support of a community coalition spearheaded by groups including the Alliance of Californians for Community Empowerment (ACCE). Mayor McLaughlin and ACCE “Home Defenders”—underwater homeowners from Richmond and the region–visited Wells Fargo’s headquarters in San Francisco to ask the company to “negotiate not sue,” only to be locked outside.

The battle over local principal reduction is coming to San Francisco City Hall this week.

On Monday, San Francisco Supervisor David Campos will announce his intention to introduce a resolution before the County Board of Supervisors expressing support for the City of Richmond’s efforts, calling on SIFMA and Wells Fargo to stop their intimidation tactics, and instructing San Francisco City staff to explore opportunities in San Francisco to adopt a similar program.

“For the last few years, we have seen Wall Street Banks challenge every effort to rebuild our hardest hit communities from the foreclosure and economic crisis,” Supervisor Campos says in a release about the event. “We need to show solidarity with bold leaders of Richmond in their effort to break the status quo as defined by Wall Street and rebuild their communities.”

People interested in siding with the range of community labor and faith that have been leading the coalition campaign to generate support for the Richmond CARES plan advocating for local action to fix the mortgage crisis can join Supervisors Campos and others East Steps of San Francisco City Hall (Polk Street) at 10 am on Monday (Sept 9).

Meanwhile, the coalition of faith, community and labor groups advocating for Richmond CARES will face off with the Wall Street backed opposition on Tuesday at the Richmond City Council meeting.

Lots more information about the battle over local principal reduction spreading across the country can be found at the website of the Home Defenders League:
http://www.homedefendersleague.org/local_principal_reduction