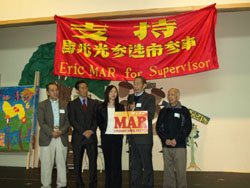 District 1 candidate Eric Mar had a well-attended kick-off on June 28th, confirming his status as the progressive choice – with labor, environmental and community advocates vouching for his candidacy. But the School Board member will need more than that to win the City’s ultimate swing district, and a small crowd of pro-JROTC protesters upset at Mar’s recent vote greeted him outside. In a contest where all three major candidates are Chinese-American, the Richmond’s Chinese community will play a large role in the outcome – and conventional wisdom says they would favor moderate candidates Sue Lee or Alicia Wang. But Mar’s support from the Ma’s Family Association (giving him a formal blessing in the Chinese community) will help him build bridges among these voters.

“In 2000, I became a Supervisor because of a fire,” said incumbent Jake McGoldrick, who will be termed out after November’s election. Eric Mar was supposed to run for District 1 Supervisor eight years ago – but he declined after his house burned down, paving the way for McGoldrick. “Eric has a wonderful mind, a wonderful soul and a wonderful future in politics,” said McGoldrick. “We learn by listening to people we don’t always agree with – and Eric has an open ear and will listen to the community.”

Before the campaign kick-off, Mar stepped out to greet the JROTC students who had come to protest him – and thanked them for making their voices heard. As a consistent opponent of the military program, Mar’s support for phasing it out of the School District could become a liability for him in District 1 – where many families have their children enrolled in it. It is clear that the protesters will try to make it a major campaign issue, as they hope it will hurt Mar’s support in the Chinese-American community.

Already, some of their tactics have taken a nasty turn. Over the weekend, Daniel Chin – who last year notoriously threatened Jane Kim over this issue – sent out a graphic by e-mail that said “Eric Mar Betrayed the Chinese Community” on JROTC in both English and Chinese characters.

But back inside Argonne Elementary School, Mar received warm speeches of support from Jane Morrison of the SF Democratic Party, labor activists (the Central Labor Council has early-endorsed Mar), youth advocate Alan Wong, Sierra Club activist Michael Bornstein and others. This is the coalition that makes up progressive San Francisco – and Mar has already lined up solid support from important constituencies. But in District 1, progressives must round up more than just the usual suspects to prevail.

Jesse Fink, President of the Clement Street Merchants Association and owner of Toy Boat Dessert Café, spoke about Mar’s advocacy against chain stores in the neighborhood. “Eric has stood behind a major cause,” said Fink, who he called “a man of integrity.”

In what will be a closely watched race, Mar faces two serious opponents – Planning Commissioner Sue Lee and Democratic activist Alicia Wang. Both are politically moderate, and both have top-down support. Lee recently spoke at a Downtown fundraiser for Plan C – a group that supports mass real estate speculation – and will be well funded. Wang is a vice chair of the state Democratic Party and member of the DNC, and last week sent out a fundraising e-mail from General Wesley Clark. Clark’s e-mail will help Wang raise money, but it won’t translate into District 1 votes.

It’s unclear if other candidates will emerge before the filing deadline. Melanie Nutter, who works in Nancy Pelosi’s office and serves on the DCCC, considered a run – but appeared at Mar’s kick-off and said that being a new mother precludes that possibility.

The Richmond is 45% Asian – with the City’s highest number of Japanese-American voters and the second-largest Chinese community. Mar has strong support in the Japanese community, with active help from Public Defender Jeff Adachi and School Board candidate Emily Murase. But with two Chinese-American opponents and that community’s tendency to vote for more moderate candidates, Mar has a uphill battle.

But Mar took an important step at his Saturday kick-off by announcing support from the Ma Family’s Association – a group of elders in San Francisco’s Chinese community. Ma is one of the Chinese Six Companies that function as a mutual aid society, each of whom represent a Chinese family name from the Guangdong Province (the name “Mar” is derived from “Ma.”)

“For Chinese people,” said Mar, “getting the blessing of your family association is really important – as it demonstrates learning from your elders.” Once you get the blessing of your family group, it makes it easier to get grassroots support within the overall Chinese community. To prevail in November, Mar will need to reach out to all segments of the District – especially groups that don’t traditionally vote for progressives.